Sullivan without Gilbert? Is that possible? It’s not only possible, as the operetta Haddon Hall shows, it’s musically and theatrically entertaining. The Victorian Lyric Opera Company (VLOC) will present the rarely performed show February 26 – March 1, 2015 and March 6-8, 2015 at the F. Scott Fitzgerald Theatre, located at 603 Edmonston Drive, in Rockville, MD. 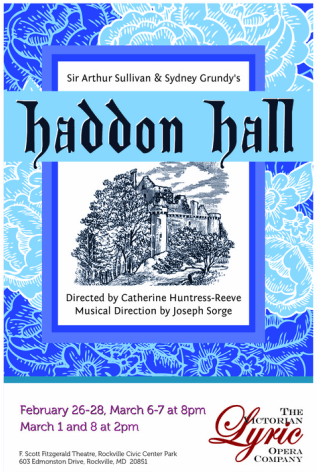 Friday and Saturday curtains will be at 8 p.m. and Sunday matinees at 2 p.m. A preview performance on Thursday, February 26, 2015 will be $12 per ticket. Regular performances are $24 for adults, $20 for seniors and $16 for students.

On Saturday, February 28th, there will be a free pre-show lecture on Haddon Hall by director Kate Huntress-Reeve at 7 pm.

The March 1st show will be a community outreach matinee, with backstage tours, talks and demonstrations. For further information visit the website at www.vloc.org, or call the F. Scott Fitzgerald Theatre box office at (240) 314-8690.

By the time of Haddon Hall‘s premiere in 1892, Sir Arthur Sullivan had long been recognized as the greatest British composer of his generation. He was also engaged in one of his periodic feuds with his principal operetta collaborator, William S. Gilbert. Without Gilbert, Sullivan had scored a critical triumph with the opera, Ivanhoe, among other musical successes, but wanted to return to both the fame — and money — that his lighter comic works with Gilbert had brought.

He agreed to team up with an established librettist, Sydney Grundy, and the result was an operetta that drew on an historical event and featured one of Britain’s stately homes, the eponymous Haddon Hall.

The show ran a respectable 204 performances in London, and was frequently revived in the decades following, but only rarely since the 1920s.

“It’s a real shame that it has languished,” said VLOC Artistic Director Joseph Sorge, who will conduct VLOC’s full orchestra, “because it shows Sullivan at the height of his powers. It features some of his most beautiful melodies and choral harmonies. Our very talented musicians will show the music off to its best advantage.”

“Haddon Hall is one of Sullivan’s loveliest scores,” said Director Kate Huntress-Reeve. “Fans of “He was a Little Boy” from Patience, or of Sullivan’s many beautiful madrigals, are in for a treat. Haddon Hall offers not one, not two, but three love duets, men’s and women’s ensembles, mixed ensembles, a storm, and huge choral scenes. Throughout, the harmonies are rich and warm, and often a little surprising. Our truly fine cast is enjoying exploring these pieces.

“Many of the characters in the operetta existed,” she explained, “and Haddon Hall is a real place. The plot is based on the — probably apocryphal — tale of the elopement on horseback of Dorothy Vernon, the beautiful and spunky daughter of the house, with the son of a hated neighbor. Their elopement is supposed to have occurred during the reign of Elizabeth I, but Grundy shifted the action forward a century to the time of the Restoration of the British Monarchy, and then sprinkled in a mix of neighbors, staff, a determinedly Puritan (but not teetotaling) Scotsman, and an avaricious cousin with his motley group of sidekicks. This is not your typical Savoy opera plot.

“There’s nothing like sweetness and laughter to warm the heart on a cold winter evening; we hope you will join us as we offer this seldom-heard gem.”

Haddon Hall is a real-life manor house in Derbyshire said by experts in historical architecture to be “the most perfect house to survive from the middle ages.” It is a major tourist attraction to this day and has been the setting for many movies and television dramas.

Grundy moved the story forward a century to take dramatic advantage of the strife between pleasure-loving Royalists and the dour Puritans, who favored a strong Parliament. The Puritans got the upper hand with the beheading of King Charles I. Royalist Sir George sought to preserve his estates by betrothing Dorothy to his disagreeable Puritan cousin Rupert. She thwarted his intentions by running off with a neighbor’s son, John Manners. After many ups and downs, true love won out, much as it does in the better-known Gilbert & Sullivan works.

The Victorian Lyric Opera Company is a non-profit organization founded in 1978 to perform musical works of the Victorian era. VLOC’s first show was Trial By Jury paired with Cox and Box. Since that time the company has performed every operetta in the Gilbert & Sullivan canon, most of them many times over. Lately, VLOC has branched out into other European operettas and even grand opera, such as Mozart’s The Magic Flute and Donizetti’s The Elixir of Love. The mission of the company is to provide high quality performances of light operatic works, offering educational and performance opportunities for our community.

In 2011, The Victorian Lyric Opera Company merged with The Forgotten Opera Company. VLOC is a resident company at the F. Scott Fitzgerald Theatre at the Rockville Civic Center, and is supported in part by funding from the Montgomery County government and the Arts and Humanties Council of Montgomery County.

Meet the cast and read a synopsis here.