Inspired by Billy Wilder’s iconic 1950 film, Webber’s musical version, featuring book and lyrics by Don Black and Christopher Hampton, focuses on the fading career of legendary silent film star Norma Desmond. With a career threatened by the advent of the “talkies” and a desperate fear of being discarded by Tinsel Town, Norma is convinced she can make a big Hollywood comeback. With the help of struggling screenwriter Joe Gillis, Norma starts on a quest to remind Hollywood and the world that she is still big – “it’s the pictures that got small.”

Joe Gillis is portrayed by popular local actor Joshua Redford, seen as John Proctor in The Crucible, Aaron Fox in Curtains, Tom Wingfield in The Glass Menagerie, and Joseph in Joseph and the Amazing Technicolor Dreamcoat. In addition to teaching sixth grade at Hunters Woods Elementary School and serving as Reston Community Players’ President, Redford has received WATCH nominations for his direction of The Drowsy Chaperone, Legally Blonde, and I Love You, You’re Perfect, Now Change.

Diane: What is the best part about playing Joe Gillis in Sunset Boulevard?

Joshua: Sunset Boulevard is the musical that first got me involved in musical theatre. I was drawn to the character of Joe as a dramatic actor. I enjoy playing characters that offer an opportunity to explore many different levels and emotions.  There aren’t too many dramatic musicals out there and it is a dream come true to be playing this role.

What is the most challenging thing about playing Joe Gillis?

What is your favorite number that you perform in Sunset Boulevard?

“The Perfect Year” because I get to tango, waltz, and get kissed by Katie McManus (Norma Desmond).

What number from Sunset Boulevard do you wish you were singing?

I sing everything unless Norma sings it, so I guess I’ll take “As If We Never Say Goodbye” away from her.

If you’re ever lost and find yourself at the mansion of a fading star. Get OUT!

What makes this production of Sunset Boulevard special or unique?

The show is a beast musically and technically, but we have an incredibly talented design team that has devised clever means for creating a grand set in the intimate setting of the CenterStage theater.

What are the enduring themes of Sunset Boulevard?

Nobody wants to be forgotten. We all want to leave some kind of legacy.

Sunset Boulevard plays through March 21, 2015 at Reston Community Players performing at CenterStage at the Reston Community Center – 2310 Colts Neck Road, For tickets, call the box office at (703) 476-4500 x 3, or purchase them online. 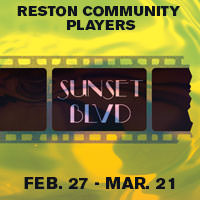 Winner of seven Tony Awards, Sunset Boulevard combines the classic movie feel with what TIME magazine calls “Lloyd Webber’s most artfully constructed score.” The hit musical has engulfed audiences around the world. Webber’s score includes such poignant, bittersweet romantic songs as “With One Look” and “As If We Never Said Goodbye.”