The City of Fairfax Theatre Company will present John Patrick Shanley’s Doubt: A Parable on March 5-8 and March 12-15, 2015. Performances will take place in the Downtown City of Fairfax, Old Town Village – 3950 University Drive, in Fairfax, VA. 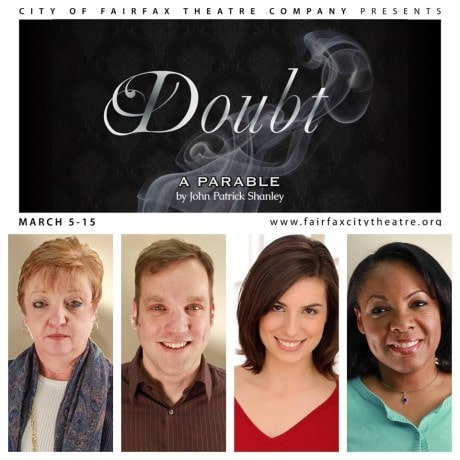 The Pulitzer Prize winner for Drama (2005) and Tony Award winner for Best Play, Doubt: A Parable is a mesmerizing drama that will keep you on the edge of your seat. John Patrick Shanley’s Doubt, as the title suggests, centers on uncertainty, intuition, and suspicion.

Set in the socially transitional time of 1964, the probing story hinges on a dogmatic and stern nun, Sister Aloysius (played by Lisa Anne Bailey) and her qualms about a compassionate, forward-thinking priest, Father Flynn (played by Chris Andersen) at St. Nicholas’s Church in the Bronx. The year is 1964, one year after the assassination of an American president and in the midst of the progressive transition in the Catholic Church. Anna Fagan plays Sister James and Brenda Parker plays Mrs. Muller.

Fairfax City resident Ed Zakreski, who works as the Chief Development Officer at DC’s renowned Shakespeare Theatre Company, makes his directorial debut with CFTC with this production: “Although the play was written over 10 years ago, and set 50 years ago, the issues it presents still resonate today. When you look at recent news stories about fraternities at state universities or famous entertainers, questions about accusations and voracity still vex us today. Our world still struggles with how to find the truth when the facts are not black and white.

The production is set very simply, keeping the focus on the experienced four member cast and Shanley’s language. I am very lucky to have four accomplished and award-winning actors to take on these meaty roles.”

“The play asks interesting questions – can you truly know something? How can you know what you believe is true?” says Chris Andersen, actor portraying Father Flynn.

Portraying the character Mrs. Muller, Brenda Parker says “I can identify with a mother’s drive to do anything to protect her child – at any cost. Even if it means making sacrifices. Mrs. Muller is ‘Mama Bear’ with a twist.”

The City of Fairfax Theatre Company offers high quality theatre experiences to people of all ages through stage productions, summer camps, and workshops. CFTC builds a creative and collaborative environment to encourage artists of all ages and backgrounds to discover and develop their performing arts talents.

CFTC believes in providing a multitude of opportunities, including family-friendly performances, camps and workshops, for young people and adults in the City of Fairfax and surrounding communities.

Doubt plays from  March 5 – 8 and March 12 – 15, 205 at The City of Fairfax Theatre Company, performing in Fairfax City’s Old Town Village, 3950 University Drive, in Fairfax, VA. Free parking is available. $17 tickets are available online. Remaining seats, if available, will be sold for $20 at the door one hour prior to performance times. Thursday, Friday and Saturday evening performances begin at 7:30 PM and Sundays at 2:00 PM.

Running Time:Approximately 90 minutes. There will be a brief “talkback” session with the actors and directors follows each performance.

More information about City of Fairfax Theatre Company can be found by visiting our website.

Downtown Fairfax City encourages and supports patrons of the arts. Please consider patronizing these City of Fairfax Theatre Company sponsors either before or after the performance. And we have some special discount offers for Doubt ticketholders if you visit these nearby restaurants:

Fresh American cuisine with a Mediterranean twist in a casual environment and a pre-theatre menu is available at Georgee’s Pizza and Grill.

Casual dining & drinks before or after the show is available at The Greene Turtle.