THIS SUNDAY, MARCH 8TH AT 4 PM AT STRATHMORE!!

Shakespeare’s great love story is transported to modern-day New York City and Verona, Italy through a unique pairing of the timeless music of Bernstein’s West Side Story (sung in English) and Gounod’s Romeo et Juliette (sung in French).

In both tales, two young idealistic lovers find themselves caught between opposing factions. Their struggle to survive in a world of hate, violence and prejudice is one of the most innovative, heart-wrenching and relevant musical dramas of our time.

The semi-staged and costumed production will feature the Young Artists of America Vocal Ensemble made up of over 50 student and professional vocalists in collaboration with the MCYO Philharmonic & Symphony Orchestras, made up of the best student instrumentalists from the Metro DC area. The production will be directed by George Mason University’s Rick Davis and conducted by Kristofer Sanz. The MCYO Symphony will perform under the baton of Simeone Tartaglione.

YAA prides itself on bringing in world class guest artists to work closely with our students in each production. We could not be more excited to welcome these guest artists and mentors that will guide our YAA students throughout this production, both on the stage and behind the scenes. 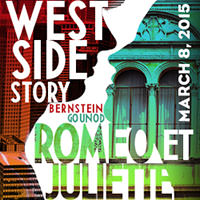 The staff of DCMetroTheaterArts honored many performances and YAA productions in their 2014 Honors. Read about it here.

Read all our YAA coverage on DCMetroTheaterArts.