My phone told me it was 14 degrees as I made my way to the Atlas Friday evening. A fitting temperature for the world premiere of a work titled Glacier, by Moveius Contemporary Ballet. By day Diana Movius, company founder and artistic director, is an international climate policy expert working at the World Bank; evenings and weekends she spends in the studio creating new choreography and nurturing a cadre of young dancers. For this performance on Friday, March 7, 2015 at the Atlas Theater’s Intersections Festival, Movius combined both her worlds for an environmentally themed evening. 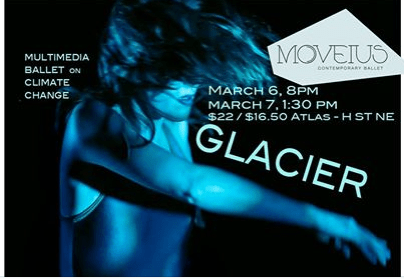 Glacier, set against a moving video backdrop depicting oceans and waves, snow and ice encrusted land masses and roiling oceans. There’s even a scene featuring the underwater moves of a polar bear and seal. Videographer Robin Bell skillfully layered naturals shots with those featuring the dancers in this ambitious piece for eight live performers. The work opens slowly, with a parallel walk across the stage. As the dancers collect and blossom into a sequential lunge, the musical collage feature a Phillip Glass-like score featuring compositions by Max Richter, David Lang and Andrew Thomas.

Movius put her female dancers in point shoes, adding a level of instability, particularly when they transition into or out of the floor, pushing over their arches. While not exactly pretty in a balletic sense, instead Movius’s movement features, particularly in the early sections – “Cracking Ice Sheets/Tipping Icebergs” — jagged edges, precarious balances, sharp elbows and flexed heels. Later, the work smoothes and softens, particularly in a lushly undulating solo called “Meltwater.” Diego Sosa’s solo for “Calving,” set against a backdrop of a polar bear gliding underwater, connects with the mammal’s power, speed and agility in Sosa’s leaps, dives and turns. A duet featuring Dustin Kimball and Callan Curtis brings the work to a close with the pair’s face-to-face undulations, scoops and softening arms in the section entitled “Melting.” The work comes to a close after a whirlwind of stage devouring running, dives and crawls on the floor. The dancers come in their hands dipped in paint that they wipe across their bodies, faces, the floor, coating everything in muddy gray, black and white – and a final streak of blue. Movius’s epilogue offers a moment of cleansing and redemption: three bowls of water set on the floor become a source of rejuvenation as the dancers one by one clean their faces and hair of the markers of a polluted earth.

The work provides a living landscape in embodied movement and a visual guidebook into the rapidly shrinking glaciers via Bell’s video.

The evening opened with an excerpt from Florian Rouiller’s 2012  “Profondeur Inconnue,” or “Unknown Depths,” a well chosen companion work to “Glacier,” for its parallel environmental theme. Stripped of its sculptural backdrop and original far more textural costumes, the trio and duet sections explore, too, the depletion of earth’s natural resources, here the topic is water and the score by David Yates features wave sounds, along with dripping and rushing water. Unfortunately, the dancers for the most part lacked the undulating softness and full integration of the core necessary  to breathe life into Rouiller’s rounded, liquid arms and undulating torsos. The duet for Catherine Roth and Dustin Kimball, though, felt more centered and voluptuous, thanks to Roth’s  lovely balletic technique.

Glacier is performed again today, March 7, 2015 at 1:30 PM at Atlas Performing Arts Center’s Intersection Festival – 1333 H Street, NE, in Washington, DC. For tickets, purchase them online or at the door.