Passion Play debuted in 2005 at Arena Stage to critical acclaim. Forum Theatre is bringing it back in a fresh staging by Artistic Director Michael Dove that begins previews March 19, 2015. I spoke with him to find out more.

Michael: Over the years people would ask me, “What’s your dream project? What’s the play that you haven’t gotten to direct that you really want to?” And I would always say this one. Passion Play really excites me on aesthetic grounds; I just love the way it’s constructed. I’m a big fan of long epic plays that jump around locations with complicated crossing over of the ensemble. It’s a style of working I really like.

What also intrigued me about Passion Play was the idea of the role that religion plays in our society. That’s a theme in a lot of work that I’m drawn to. I was raised in a very religious Christian Pentecostal household; my grandfather was a Pentecostal minister. Moving away from home and meeting people who were not raised that way, I became fascinated with people’s morals and where morals come from, and how Christianity shapes morals in American society, whether you grew up Christian or not.  It plays a big role in our politics. It’s hard to imagine someone being elected president who was an atheist; that’s just impossible in this country. So I think the role of religion in society is really worthwhile to explore.

I share your sense of how religion is the major carrier of ethical values in society. There really isn’t a secular carrier of moral values.

My girlfriend was not raised in any sort of religious practice, yet 99.9 percent of our morals line up. Where does that come from? What is the collective sense of moral teaching in our society?

Tell me about your production of Passion Play.

I’ve always seen the play as a production being put together in front of you—these three ensembles of actors and directors who as a community put on a play that has great meaning to them. I wanted to carry that into the way we approached the work, so every piece of furniture and every set piece is something that came from our building. We’re pulling ladders, we’re pulling benches, scaffolding, and letting that be our material that we work with.

In her author’s note Sarah Ruhl mentions a “poor theater” production of the play that she liked because “it allowed the audience to fill in the metaphor with their own imagination, and it used the simple tools of theater to create transformation.” That sounds like the approach you’re taking.

Absolutely. There are large curtain hampers and ladders that transform into many different things. The only exception is, we’re building a stage where the cross is.

The cast includes names that will be familiar to local theatergoers (The above picture from left to right): Shayna Blass, Frank Britton, Edward Christian, Ben Cunis, Matt Dewberrry, Jonathan Feuer, Megan Graves, Rick Hammerly, Laura C. Harris, Michael Litchfield, and Jon Hudson Odom. Can you give me highlights of what we can look forward to seeing them do in Passion Play?

It was really important to gather a group of people who worked well with one another and who were also game—a group of actors who have their own sense of play: Here’s our ladder, what do we do with the thing?—really pooling ideas and collectively creating the thing. That spirit carries into the performance, which has come from this group of people—these designers and actors and me, who have all been in this room together. We wanted it to have that same community feel and sense of who these characters are that the play talks about.

It’s a group of people who are fun to be in a room with, but it’s also a remarkable group of actors just based on ability. I’m blown away every day about who we’re able to bring into this show. For instance there’s Ben Cunis, who most people know from shows at Synetic Theater; and that experience has informed a lot of the work we’re doing. His training and his eye and sense of creation have been really great.

Sarah Ruhl’s language is very imaginative. It’s got a lot of magical realism, it riffs and shifts, it’s poetic and kind of out there. What has it been like for your cast to make it their own?

Sarah Ruhl’s plays are incredibly active and playable, and she’s incredibly gifted, and I love working with abstract text. The thing I always stress with plays like this is: Make it active. There’s a running note that the actors know I’m looking out for, when I say: You’re sitting back and you’re just reciting poetry and you’re not using it; you’re not keeping it active. The beauty of the language is retained even when it’s thought-through, active language that people are using to convince, to fight, to persuade. That’s what’s really important about capturing Ruhl’s language.

Passion Play contains a lot of references to Christianity, and Easter [April 5th] falls during the run of the play at Forum [March 19 to April 12th]. What was your thinking about that?

Easter is a major holiday for many people, not only in this country but around the world, so why not place Passion Play at that time so that it becomes part of a larger conversation about what this event, this holiday, means to us? Of course it coincides with holidays of other religions with similar themes.

The play Bad Jews, recently at Studio Theatre, was written by the young Jewish playwright Joshua Harmon, and it seemed to appeal, very cleverly and insightfully, both to Jews who are observant and those who are not, plus a whole lot of non-Jews like myself—it became a hit with everyone. Sarah Ruhl grew up Roman Catholic, and her play is suffused with stories from the Christian Bible. So I want to ask you: How do you think the Forum production of Passion Play will speak to audience members who are faithful Christians, and how do you think it will speak to those who are not Christian and those who like myself were Christian once and are lapsed?

If we’re doing our job right, the production will have meaning to those three distinct groups and that will become part of the conversation after the show. People who are practicing in the Christian faith or who once practiced will understand many of the references. But within the play there are also characters who struggle with being in a society where this faith is so important and where in all three eras the Passion Play is a tent pole of the community. What does it mean to be in such a community where performance of the Passion Play is held in such high regard but they don’t feel it, they don’t have the same connection to it? That is something a lot of people will be able to pick up on if they come from outside of the faith.

We live in this society, America, that puts forward this faith as its central tenet, arguably beyond constitutional allowance. Passion Play is as much about outsiders as it is about devout faith people. What does it mean to be outside of that belief system? That story is there.

I learned how to run a theater company by growing up in a church, because ultimately the goals are pretty close to the same. It’s about bringing a community together to tell stories and to collectively talk about how we live better with one another. At its core, that’s what Passion Play is about. It’s using theater and storytelling to look at one another and say: What are we doing? What are our values? That is something that comes through that has nothing to do with faith.

How does Passion Play speak generationally to younger people and older people?

It’s a triptych but it’s also a cycle. You have the same actors portraying the same characters in part after part, so one of the through-lines and messages is that these conversations have happened and they will happen again. And ultimately we have to decide what is valuable to carry from the past. What is the value of carrying that forward, and what is the value of changing that and saying we want things to be different? We pass on not only morals and values but we also pass on sins and society. How do we learn from generations, and how do we forge our own future and our own existence that is different from what came before?

I want to end with a fun question. There’s a character in the play who’s a director—and I’m assuming you don’t play that character.

Which director in town would you have loved to play that role and why?

Oh, gosh, I don’t know how to name-check any of them.

I’ve enjoyed this, Michael. I’m moved by how you think and talk about your passion for this play. I can’t wait to see the show, which feels to me like a really important event. I know it’s going to be a long event, three-plus hours. But it feels to me as if it could be one of those epics where you don’t even notice time going by.

Yeah, I love long plays. When they work, they take you on a much larger journey. 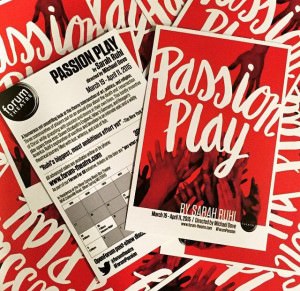 Passion Play plays through April 11,  2015 at Forum Theatre, performing at The Silver Spring Black Box Theatre – 8641 Colesville Road, in Silver Spring, Maryland. For tickets call the Box Office at 301-588-8279, or purchase them online. Pay-what-you-want tickets are available one hour before the show.