Tell us about yourself and your background.

I am a British composer/lyricist, working primarily in the medium of musical theatre. I wrote my first musical at the age of 18 for the Northern Academy of Performing Arts in my home town of Hull. Since then I have continued to write for theatre, my most recent musical being The Trees, a rock horror musical comedy which is just like Hitchcock’s ‘The Birds‘…but with trees!

How did you get involved as an arranger in the Sweeney Todd Prog Metal Version?

My good friend and musical collaborator Joe York asked me to help create an audition tape for him to submit to Landless as an audition for the show, so I created a metal arrangement of the “Ballad of Sweeney Todd” and recorded it with him. Landless not only cast Joe in the show but also contacted me about joining the team of arrangers. It sounded like an amazing project and the chance to work on arrangements for Sondheim was one I couldn’t turn down. I’ve had great fun working on the project and with the amazing team at Landless.

Tell us about the arrangements you wrote for the show. Which was the most challenging? Which is your favorite?

I arranged several of the key numbers from the show including ‘The Ballad of Sweeney Todd’, ‘Kiss Me’ & ‘God That’s Good.’ The real challenge for me was to take everything which Sondheim and Jonathan Tunick had put into the music to help tell the story, and retain it whilst translating the music into the metal genre. Songs like ‘A Little Priest’ were particularly challenging as the emphasis in this song is on the lyrics rather than the music, meaning I had to be more subtle than I had been with the other arrangements. Metal music and subtlety do not generally go hand in hand!

How did the Director and Music Director influence your arrangements?

The brief for me was always to retain as much of the original intention of the songs, in order to keep the dramatic trajectory of the piece intact. Melissa instilled in us all from the beginning that this was not just a rock concert featuring familiar tunes, but that the show had to still function as a dramatic musical, with the added intensity of metal music! I’d not listened to a huge amount of metal music before this project, so being sent examples to listen to was not only eye opening for me, but hugely useful in finding the symphonic metal sound of my arrangements.

What was it like arranging Stephen Sondheim’s music, and knowing that he would hear it?

It was rather nerve-racking. Sondheim is a god in the world of musical theatre and this show is one of my favourites, and so I felt it was my responsibility to do his music justice in my arrangements. In the end, receiving his blessing for the arrangements was an amazing experience. 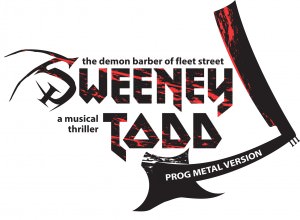 What other members of the team are saying about Andrew Siddle’s arrangements:

“Andrew [Siddle]’s ‘Ballad of Sweeney Todd’ arrangement sets the tone for the whole show. It starts out very recognizable, and then launches into metal on the chorus. It lets the audience know where the show is going.” – Melissa Baughman, Director

“He’s an incredibly versatile arranger. At one point in the process, I remember voicing a concern that we didn’t have enough ‘metal’ between the opening ‘Ballad’ and ‘My Friends.’ In just a few hours he tuned out a metal arrangement of ‘There Was A Barber and His Wife’ that is one of my favorite pieces to sing.” – Andrew Baughman, Co-Arranger and Actor (Sweeney Todd).