Jane Lynch is an award-winning actor on stage, in movies, and on TV. She plays Sue Sylvester on Glee. She has a star on the Hollywood Walk of Fame. And gosh darn it, she’s really fun to talk with on the phone.

Jane: How are you, John?

My husband and I watch every episode together. We love it.

And it’s a good thing that we’re on the phone, ’cause if we were in person I would be fawning.

Not everyone knows that you’re a heck of a singer. Gleeks do of course. And musical theater buffs who saw you in Annie on Broadway.  On last week’s Glee [episode 10, “The Rise and Fall of Sue Sylvester”] you and Carol Burnett did a song and dance number, and it was awesome. Would you talk about that?

Oh, just the best. You know, she’s been on the show before. We sang “Ohio” from Wonderful Town last time. When Ryan [Murphy] asks her to do the show, he always gives her a choice; he says, “You can sing this or you can sing that.” This last time he gave her a choice of “The Trolley Song” or “Tomorrow,” and she said, “I’d like to do ‘The Trolley Song.’ ” It’s just a wonderful song, and to be singing it with someone who was alive in that era—well, she was probably ten—it was just really fun to do. She’s a doll, and I’m glad that she keeps coming back and wanting to work.

I remember when you did Madonna’s “Vogue.” It was amazing. What were some of your favorite musical numbers you’ve done on Glee?

I guess any musical number I did I loved, because I didn’t get to do that many, so they were all exciting. But “Vogue” was really fantastic. In the final episode [airing Friday, March 13, at 9 pm on Fox], I do an ABBA song with Matt [Morrison], and it’s pretty amazing.

When I found out you’re coming to Birchmere with a cabaret show—it was my husband who saw the news and told me—I was excited to know more. How would you describe the show?

It’s a lot of fun. I started it at 54 Below, which is a cabaret space in New York, a year ago. They asked me if I wanted four nights for my cabaret show and I said, “I’d love it, but I have to get a cabaret show.” So I set about creating it.

My friend Kate Flannery, who is Meredith the drunk in The Office—she’s a very good friend, and we’ve been singing on and off for different venues for decades—she does a block of songs with me.

At the beginning of the show I say, “Join me on a musical tour through a world of songs that have very little to do with one another. It’s just that we like them. And they’re a lot of fun to sing.”

I have a five-piece band that I want to scream from the mountaintops how blessed I am to have these guys. They are amazing, the nicest guys in the world.

Tim Davis, who arranged all the vocals on every song on Glee—that’s over 500 songs—also happens to be a wonderful crooner, and he opens for me with the Tony Guerrero Quintet. And at different points in the show he sings some three-part harmony with Kate and me.

It’s fast. I have some hilll-aarr-i-ous patter. And by the end of the hour you won’t know what hit you. Everybody’s smiling from ear to ear including us.

We’ve been filling up some pretty big houses, so it’s a crazy mix. We’ve got some kids. Adults who love to go listen to music. And fans of the show. I look out and I see a variety of people of all ages. It’s just wonderful.

How did you get so good? Have you had vocal training?

No, I haven’t had vocal training—and that’s a hard question to answer without sounding very arrogant. But I love what I do. I can always tell a person who loves what they do. It’s unmistakable. And I think any deficits I have in talent, because I love what I do you don’t notice ’em. [Laughs.]

What was your first memory of singing on stage? When did you get bitten by the ‘theater bug’? And how did you know you loved it?

Oh, wow! I don’t remember not knowing that I love it.  We were a very singing family. My parents not only loved each other, like madly, but they loved to sing together. My dad’s a terrific harmonizer. And I would join them at the kitchen table, drinkin’ sour mash whiskey, and we would all do the South Side of Chicago Irish thing and sing old fashioned stuff, little ditties, and of course musicals. We had a piano. My brother played. And every Christmas Eve we had a houseful of people, an open house—oh, god I miss those days! All the kids from the neighborhood would come, my parents’ friends, and we’d all sit around the piano, we’d all sing, it was so much fun.

You stepped into the role of Miss Hannigan in Annie to huge acclaim. You were a knockout when you performed “Little Girls” on the Tony Awards. What other shows do you have in mind that you’d like to appear in on Broadway? What roles would you like to play?

I would love to do Mame or something like that.

Wouldn’t that be fun? I’d even love to do a straight play, but if you’re going to do Broadway why not sing while you’re doing it? I’ve been pretty lucky in my life letting the stuff come to me. All I have to do is be ready.

You have been steadily working for decades and then suddenly, with Glee, you appeared to be discovered overnight. But you had been a trouper all along. When that moment came that you were treated as an overnight success, what were you thinking?

First of all, I never felt like I wasn’t a success before that. If I’d get cast in a play for free, I was like, “I’m a success!” I get to do this, is how I always feel about it.

One of the things I learned early on is that the outside world has their opinion, and then I have my internal experience, which is much more in the moment. I rarely step outside and go, “Hmm, look what you’ve done.”

You also play a role in life, Jane, a really important one. You’re a role model. Countless kids and young people see you and they are stronger, less afraid. You’re an ‘out icon’, not just to younger generations. How do you handle that? What does it mean to you? How does it feel to be at this point in your life just now?

Well, like I said, I work from the inside out, so I just continue to be as authentic as I can in my life. I’ve never hidden, and I also kinda don’t get up on a soapbox. I used to, in the beginning I felt obliged to, but I don’t so much anymore. I think it’s all about being as authentic as you can. And that I think is much more powerful than making a speech at an organization that might fight for our rights. It’s more powerful to just walk your life. And that’s what I do. I also try not to step outside and go, “Oh, my goodness, what if I do this? I’m a role model for children! What will they think?” [Laughs.]

That brings me to my question about Sue Sylvester. The putdowns and the insults Ian Brennan writes for the character, they’re like hilarious arias and your delivery is always just jaw-dropping. You had to memorize all those lines. Do any of them ever come back to you in real life as things you might really say to someone—

—if you were as filterless as Sue?

Very rarely, because they’re so voluminous, those speeches. Every once in a while something will come back to me, but like oh my god if you were to press me now to come up with something, I couldn’t do it.

What didn’t I ask that you think people in Metro DC should know about your show?

It’s so much fun, and I hear the Birchmere is just a delightful venue. I hope people will come out. It’s a Tuesday and a Wednesday, so it’s kind of nice to head out on a weeknight and have an hour of fun and hear some wonderful music. We’ve got terrific songs. I’m doing some from A Mighty Wind, some Folksmen songs by Chris Guest, Mike McKean, and Harry Shearer. I’m doing an obscure Irving Berlin song called “Mr. Monotony”. Kate and I are singing “Far From the Home I Love,” but we put a borscht belt spin on it so it’s more like a belting song than an aching aria of pain. We go back in time and do some really fun stuff from the forties. It’s gonna be a blast. 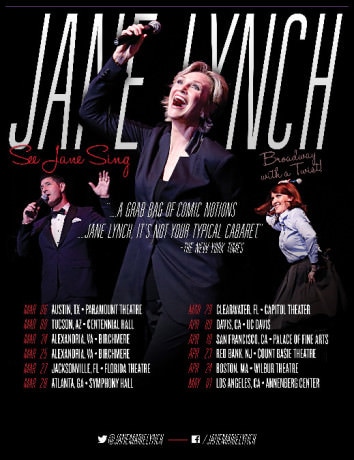