The National Chamber Ensemble continued its eight season on Saturday, March 14, 2015 with a concert titled The Three B’s for Three: Bach, Beethoven, Brahms. The event took place at the Spectrum Theatre at Artisphere.

This performance included the talents of pianist Kathryn Brake, cellist Sean Neidlinger and artistic director and violinist Leo Sushansky. The concert opened with Beethoven’s Piano Trio in B flat major opus 11. The dynamic energy and ensemble work from the trio was outstanding. This composition feels more of the Classical Period  than Romantic, but Beethoven’s character shines through with touches of drama and jarring outbursts that can only be distinctly music of Ludwig van Beethoven. The second movement is one of Beethoven’s most beautiful in which the opening cello solo was played gorgeously by cellist Sean Neidlinger. The third movement’s set of variations based on a popular tune were whimsical and showed off pianist Kathryn Brakes crisp articulation and lightness of touch.

Next on the program came a collaboration of NCE with the Bowen McCauley Dance company. The work was Bach’s Chaconne in D minor,  one of the composers most famous compositions for solo violin which is so popular it has been transcribed for string quartet, piano, full orchestra and guitar. In this work, which is not unlike a symphony for violin alone the violinist is playing simultaneous harmony and melodies incorporating chords, double stops and brilliant  virtuoso passage work. All these demands were handled brilliantly by violinist Leo (Leonid) Sushansky. The tone of the lone violin filled the theater sounding almost like an organ. It was exciting to hear, and even more spectacular to see with added element of dance.

Choreographer Lucy Bowen McCauley has created a masterpiece with this work. It was a love story with two couples onstage displaying the emotion and complexities of relationships. The special touches in the choreography were exquisite.

Especially memorable were the little moments with silhouettes of baroque dance, while displaying elements of modern dance  those details brought us back to the era from which this music was from. The artists of Bowen McCauley Dance were Liz Clain-Stefanelli, Alicia Curtis, Mimmo Miccolis, and Dustin B. Kimball. They danced with passion and great precision, and truly connected to the music.

There was a moment which made me nervous where it looked like the pointed toe came dangerously close to the violin, but all was well.  Amid bravos, Choreographer Lucy Bowen McCauley was brought onstage afterwards for a bow with the violinist and dancers.

National Chamber Ensemble’s Bach, Beethoven, and Brahms was a very original presentation which one rarely gets to enjoy at a chamber music concert.

The second half of the program consisted of just one large scale work, the Piano Trio No.2 in C Major by Johannes Brahms. The work demands orchestral sonorities from the three instruments and the artists lived up to the challenge.

Pianist Kathryn Brake played with great power and control while never overshadowing her partners. The violin and cello sounded like one instrument passing the melodies from one to the other. It is always a great pleasure to see outstanding ensemble work and in this case the rich lush romantic melodies, expressive and impressive communication between the musicians made the second half of the program feels like a great main course of an excellent musical dinner. The coda of the last movement was especially exciting with an added burst of energy which ended the concert jubilantly. 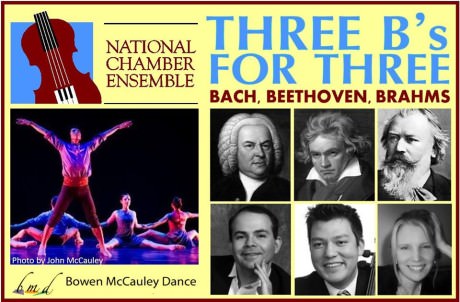 Bach, Beethoven, and Brahms was performed for one night only on March 14, 2015 at the National Chamber Ensemble performing at The Spectrum Theatre at Artisphere – 1611 North Kent Street, in Arlington, VA. For future events, visit their website.