The Catholic University of America, Benjamin T. Rome School of Music had its opening night of Giuseppe Verdi’s opera Rigoletto this past Thursday night at the Hartke Theatre, in a wonderful showcase of its student talent in a beloved and difficult tragic masterpiece. 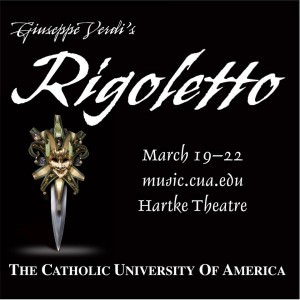 First, appropriate laud must be given to the ambitiousness of the undertaking. CUA is only one of two schools in the nation with the talent pool and most importantly, initiative, to take on this behemoth of a work. Considered the first of Verdi’s “big three” operas (the others being Il Trovatore and La Traviata), Rigoletto is sung in Italian and is considered not only a staple of operatic repertoire, but also a landmark opera in its own right, marking a critical turning point in its composer’s stylistic career. In three acts, Rigoletto tells the story of its namesake, a wayward and hunch-backed court jester; his employer, the Duke of Mantua, a licentious womanizer; and Rigoletto’s innocent daughter Gilda, who falls between them.

It is the vocal talent that must undeniably be praised, backed by the constancy of the music of the CUA Orchstra and its conductor, Marco Daniele Tirilli.

The titular Rigoletto, the conflicted soul, is sung by Kevin Johnson, an experienced CUA doctoral student with previous featured roles in Don Giovanni, Roméo et Juliette, and Cosí fan tutte. Johnson’s baritone is exceptional in its flexibility and fluidity, matching his character’s ever changing personality from witty to sorrowful, gleeful to vindictive. It is not better showcased than in the first major aria in Act I, which comes appropriately from Rigoletto himself, “Parisiamo” – “we are the same” – in moral reflection comparing himself as a comedian to an assassin. Johnson is a powerhouse voice who has the uncanny ability to fully channel the complete spectrum of emotion of the music in his voice. In the case of Rigoletto, this becomes increasingly more woeful as we see Rigoletto’s struggle through the temperamental inflection of tone and volume.

Carlos Feliciano, a first-year CMU doctoral student and former resident artist with the Pittsburgh Opera, plays a convincing seductive Duke, with almost alarming ease and conviction, in fact. Suave to the core, Feliciano navigates the other characters on the stage with nuance, his more direct and clearer tenor voice the perfect vehicle of his ‘leading romantic man’ persona. In Act 3, Feliciano does high justice to the most renowned of the arias, “La donna è mobile” – “woman is fickle”, in an ironic embodiment of the Duke’s capriciousness in voice and action.

Senior vocal performance major and soprano Molly Allen takes on the challenge of Gilda, and it must be said that this role is no mean feat. Allen channels the naivety and innocence of the only female lead character in the accuracy and cleanness of her high soprano. Amongst a sea of deep baritones, Allen rises above. Her premier solo in Act I Scene ii received rousing applause from an appreciative audience.

A special recognition is made to William Powell III, who performs Count Monterone, the curse-setter, whose deep bass baritone is so immensely powerful in his entrance scene – “Monterone!” – it cuts the festive mood in a single instance. Further acknowledgement must be made of the Act III piece “Bella Figlia Dell’Amore” – “beautiful daughter of love” with the Duke, Gilda, Rigoletto, and Maddalena (contralto Kristin Green) in a joint quartet as a seduction is played out amongst hidden witnesses.

Stage Director Dr. James Hampton has surely created something special here. Being in such an intimate stage setting, the production value is surprisingly high – most particularly in the design of the splendidly detailed costumes by Glenn A. Breed. But it is also the movement and placement of the action and the people that creates a mood that is charming at times, deeply heavy in others – just as Verdi intended, it can be imagined. The only complaint lies in the coordination of the supertitles in time with the voice during this particular performance – a technical misalignment that impeded detailed comprehensibility in some instances. In all, however, it is the “voice and trump” that impress beyond all expectations.

Any operatic fan would be remiss to miss this wonderful performance of Rigoletto – this masterwork by one of the selfsame masters of Italian opera, most especially because it showcases the wonderful fresh, local talent that will no doubt fill our program lists in the time to come.

Running Time: Two and a half hours, with one 15-minute intermission.

Rigoletto plays through tomorrow, March 22, 2015 at The Catholic University performing at the Hartke Theater – 3801 Harewood Road, NE in Washington, DC. Tickets can be purchased through the box office at (202) 319-4000, or online.