The legacy of the brilliant and iconic jazz legend, Billie Holiday, coupled with the cool, classic styling of the very contemporary and experimentally-inclined jazz artistry of Cassandra Wilson fused together in splendid synergy at The Kennedy Center’s Eisenhower Theater last night. The musically innovative Wilson took her love of Holiday’s (“Lady Day’s”) music and paid her the ultimate tribute by immersing herself and her supremely gifted six-piece ensemble in a free-flowing, expressive and eccentrically enticing set of Holiday standards.

The concert—aptly staged during the fast-approaching 100th Anniversary of Holiday’s birth —played out in such immediacy and electric intimacy, that is was almost if one had spontaneously stumbled upon a particularly jazzy and improvisational  “all night long” jam session straight out of jazz history lore. As expected, Wilson and her musicians eschewed standard formulaic jazz interpretations in favor of an acoustically-charged approach. Overlapping musical solos, long interludes of no vocals whatsoever and surprising, fresh musical rhythms underlined each and every passage of every song performed. This artistic vision was perfectly suited to adding new perspective to the more expected response to the raw, direct poignancy of Holiday’s music.

I believe that Wilson and company wanted to pay Holiday the highest musical praise and they did so by radically deconstructing the usual interpretation of her music. Nothing whatsoever in this amazing concert was calculated for an immediate response —-every nuance and every note seemed novel, seemingly improvised, visionary, imaginative and spontaneously conceived. The superb artistry of Cassandra Wilson was on equal footing with her glorious ensemble of musicians and nobody was given precedence over another; the musicians and Ms. Wilson all performed as one organic unity in the service of making the music of Billie Holiday accessible in a new and immediate vigor for a new generation of music lovers.

A very long and effective musical prologue evocatively embellished Wilson’s sultry, languid, and spare cover of “The Way You Look Tonight.” The musicianship of Robby Marshall aided immeasurably in the mesmerizing quality of this piece.

The popular standard “Don’t Explain” was given new life by Wilson as she sang with resonance and a matter-of-factness that was subtly moving.

A somewhat sensual and relaxed quality imbued the rendition of “What a Little Moonlight Can Do.” The instrumentals surged with an-almost dissonant yet, concurrently, ebullience of tone. A totally surprising yet artfully natural musical pathway was bridged between this song and the following number “Crazy He Calls Me.” Kevin Breit’s guitar and Charlie Burnham’s violin conveyed an exciting musical interspersion in the proceedings.
Wilson enthralled with a searing yet controlled immediacy as she sang “You Go to My Head” as if she had just had a special epiphany that she was sharing with the audience. Like peeling the layers of an onion, Wilson kept channeling deeper into the song until she broke the fourth wall of the stage and she appeared almost incandescently transfigured on the stage.

Wilson mentioned Diana Ross’ version of “Good Morning Heartache” and, then, she launched into her stunning version of this melancholy standard. As she sang each successive line—realizing that she is doomed to live with her heartache, she approaches the closing with an almost defiant command to her heartache as she sings “Sit Down!”

An original song that was written by Ms. Wilson herself was a special and unique addition to the concert. Entitled “Last Song (For Lester)”, this song is a creative message from Holiday to her musical love, Lester Young. Wilson sings the song as if she was almost in a trance-like reverie. The musicians add luster with a highly original instrumental arrangement that heightens the dreamlike feel of this finely-wrought piece. 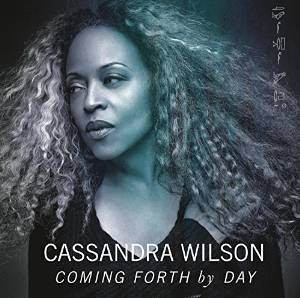 For the concert’s well-deserved encore, Wilson sang a haunting rendition of “I’ll Be Seeing You” to sustained applause.

Aside from the superb musicians mentioned, Lonnie Plaxico on Bass, Jon Cowherd on Keyboards, and John Davis on Drums were phenomenal in all aspects.

Cassandra Wilson and her ensemble have given a concert that will live on as a seminal moment in jazz history.

Cassandra Wilson –Coming Forth by Day: A Tribute to Billie Holiday was performed on March 28, 2015 at The Kennedy Center’s Eisenhower Theater – 2700 F Street, NW, in Washington, DC.  For information on future events, go to their calendar of events.