I attended the Russian National Ballet Theatre’s enchanting Cinderella on Friday night at the Hylton Performing Arts Center. Cinderella moves to George Mason University’s Center for the Arts on April 18, 2015 and their Sleeping Beauty will be performed the following evening-on April 19, 2014. 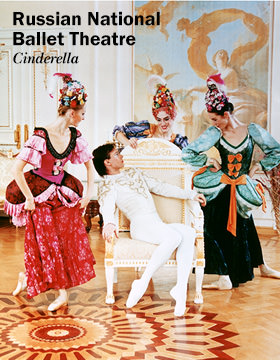 Founded in 1989 by dancers from the famous Mariinsky  Theatre in St. Petersburg and the Bolshoi Ballet in Moscow, it is the only independent ballet company in Russia. The traveling company preserves and presents classical ballet in its purest form, and if the Cinderella Friday night at the Hylton Center for the Performing Arts in Manassas was any indication, these artists can almost make you weep at its beauty.

The hallmark of this company is that they do not just dance technically, they act the parts. “We make sure they show their souls,” said Daev Alexander, a dancer himself and head assistant to Artistic Director Elena Radchenko, a Bolshoi principal dancer who founded the company during Perestroika. In 1994 she was named by then-Russian President Boris Yeltsin as its permanent artistic director.

In addition to Cinderella, choreographed by Rostislav Zakharov, the company’s repertoire includes most of the major works of legendary choreographer Marius Petipa, including The Sleeping Beauty.

Maria Klueva danced Cinderella beautifully on Friday night. The graduate of the Nesterova Moscow Ballet Academy has the most natural of movements and was confident in her many lifts, which were the most fluid I have ever seen.

The performance begins with Cinderella looking on as the Two Ugly Sisters (Elena Khorosheva and Milena Stashina) fight over a piece of cloth they are sewing. The Dance Maser (Nurlan Kinerbaev) arrives and they have a lesson along with the blue-eyeshadowed Stepmother (Evgeniy Rudakov), who turns in a Broadway-style performance with his mobile features.

The Sisters have a dance lesson and Cinderella dances alone after they leave for the ball, only to be transformed from rags to riches by a lovely Fairy Godmother (the supremely elegant Olga Gudkova).  Her arrival at the castle is splendid, with her riding high on the shoulders of the dancers surrounded by the four Fairies of the Seasons Princesses: Spring (Alexandra Krukova), Summer (Galina Ishenko), Autumn (Viktoria Baldanova), and Winter (Hanna Zimovchenko).

Klueva and the Prince (Azamat Askarov) perform an endearing dance together in the ballroom as the music by Sergei Prokofiev soars and they are completely taken with each other. Lifted aloft in his strong arms, she floats like a bird. Once he sets her down, he leaps, twirls, and does ecstatic backwards scissors kicks.

Then the Two Ugly Sisters duke it out over the Prince with elbows flailing. Khorosheva, with her lower lip stuck out, makes many hilarious expressions with both her face and body language, while Stashina’s grandly arched eyebrows and neck-thrusting head positions look like something straight out of a Disney cartoon.

The Corps de Ballet moves as one living creature as they pair for formal ballroom dances wearing magenta tea-length gowns for the female dancers and dusky purple velvet jackets for the men that offset the red and purple painted scenes beautifully. The elegant costumes and set were designed by Elisaveta Dvorkina.

Vladimir Tapharov athletically and precisely dances the roles of Jester and a character called only ‘The Time.’ Dressed in silk harlequin jacket and shorts as the Jester, he embellishes various tableaus with cartwheels, while as The Time, he jumps rhythmically and makes swinging mechanical motions with his arms to indicate the hour, his face shielded mysteriously by a tall, floppy tophat.

A real scene stealer is when the Ambassadors dance in the flavor of the countries they represent. The exotic Mauritanians were danced by Konstantin Marikin and Malika Tokkojina, whose backwards-bent hands provided an ethnic flourish; the Spanish, by Rustern Assanov and Ainura Abilgazina, moving in time to the castanets; the Chinese, by Anton Baglikov and Ekaterina Pokrovskaya, who held oranges aloft as they jumped precisely from one foot to another, and the charming Russians, by the high-kicking Yaroslav Lishuk and Galina Ishenko. It is interesting to note that Choreographer Zakharov is known for his Spanish dances. The beauty of the dancing and the costumes made this a real cultural treat that is not to be missed when it comes to Fairfax next month.

But don’t despair, the Russian National Ballet Theatre is coming to George Mason University Center for the Arts to perform Cinderella on April 18, 2015 and Sleeping Beauty on April 19, 2015. A discussion with will be held 45 minutes before each performance with a member of the company.