I’ve wanted to direct a thriller for years, so I jumped at the chance to direct Molotov Theatre Group’s upcoming production of The Margins by David Skeele (opening April 2 at DCAC in Adams Morgan; for tickets, visit here). I understand how a thriller works: the build and release of tension; keeping a mystery alive while offering enough for the audience to stay with the story. Things like that.

But I didn’t know a thing about ghosts.

I only knew that they’re scary, and I don’t like being scared.

Through my research talking to ghost enthusiasts and reading the opinions of ghost hunters, I have learned that most ghosts aren’t very scary at all. While they may not be as affable as Casper, they generally keep to themselves and don’t really trouble people. Assuming the common definition among ghost researchers – that a ghost is some sort of paranormal ‘shadow’ or ‘echo’ of a person (which includes the common idea of a soul who hasn’t moved on) – this isn’t too surprising. People are generally good; or if not good, then at least not malicious. They may be sadder than most people (they are in an awkward place, after all), but otherwise, not much different than the people you see walking around every day.

This is the sort of ghost the characters in The Margins are trying to raise. When a group of psychics meet at an abandoned mansion to “create” a ghost, they expect a pleasant entity who may be their friend. Instead, they succeed in bringing forth the scared soul of a downtrodden young woman. In the real world, that would be the end of it. They would communicate with her, maybe learn something new, and leave after a night of ghost hunting to take a well-earned nap. What the characters don’t realize (but the audience does!) is that they are part of a ghost story. 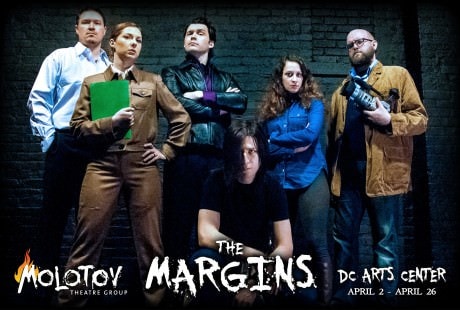 A ghost story will often cross the threshold into horror. Ghosts in these stories play by different rules than serial killers, aliens, demons, zombies, and other monsters of the horror genres. Or, rather, unlike the rest, ghosts don’t really have a set or rules to follow. A serial killer can’t float through walls. An alien can’t appear in multiple places at once (or be everywhere at once). A zombie can’t appear and disappear at will.

But a ghost can do any of these things. Or maybe not – it’s all up to the storyteller.

The ghost stories that scare me most are those in which the rules of time and space don’t apply to the ghost. I’m fine with ghosts appearing in photographs, opening windows, or trying to communicate with the living. It’s creepy, sure, but I can handle it. But when a ghost can make a year to one character seem an hour to another, can make someone wake up in a different time and place (covered in mold or slime, maybe?), or when characters finally burst through a door that was suddenly and mysteriously locked minutes ago – that’s when I get nightmares.

The degree of freedom in telling a ghost story translates to a large degree of uncertainty. As an audience, we don’t know what to expect. What does the ghost do to the people she encounters? Does she float around, unaware of their presence? Does she chat sociably with them over an intangible cup of tea? Or does she lock them in a room and force them witness disturbing acts – both hallucinogenic and real?

(One guess as to what our ghost in The Margins is like!)

For the characters, the play is about discovery — Who is this ghost, and why is she acting this way? It is about self-discovery – What are they really made of, when it comes down to a deadly supernatural threat? For me, it has been about understanding my own fear of the unknown and my expectations of ghosts. Maybe, if I ever encounter a ghost, I’ll smile and try to be its friend, to understand it, and help it move on.

Who am I kidding? I’m going to run!

The Margins plays from April 2-26, 2015 at Molotov Theatre Group performing at DC Arts Center (DCAC) – 2438 18th Street, NW, in Washington, DC. Performances are every Thursday, Friday, Saturday, and Sunday at 7:30 pm. For tickets, purchase them online.

LINK
Do You Believe in Ghosts? An Explanation of the Horror Behind Molotov’s New Show, ‘The Margins’ by Alex Zavistovich.

Reginald L. Douglas on the next chapter at Mosaic Theater