In Part 1 of a series of interviews with the cast and director of To Kill a Mockingbird at Rockville Little Theatre, meet Nancy Lark.

Please introduce yourself and tell our readers where they may have seen you perform on local stages.

I’m Nancy Eynon Lark and I play Mrs. Dubose. Previous roles include staged readings in scene showcases as The Nurse in Antigone and Martha in The Children’s Hour for Round House Theatre’s Heyday Players. This is my first acting role in a full length play.

I’m wearing multiple hats for this production where I am also the props designer and set decorator. I have worked behind the scenes on many productions for RLT including last season’s An Inspector Calls. Other companies where I have done props and set decoration include SSS, PTC, and DTC where I just completed My Fair Lady.

DC theatre goers who have low vision may have heard my voice as an audio describer of live plays at Arena Stage, Ford’s Theatre, Olney Theatre, and Round House Theatre.

Why did you want to appear in this production of To Kill a Mockingbird?

Like so many others, I fell in love with the book and the film as an adolescent. An avid reader growing up in the rural South in the ’50s and ’60s I felt as though I knew the residents of Maycomb personally and identified closely with Scout. Harper Lee’s novel is one of the most important and influential works of American literature. When I heard the show would be part of RLT’s season I jumped at the chance to be on the design team.  For some time I had also been looking for the chance (and courage!) to take on a small, manageable role onstage. Mrs. Dubose’s querulous disposition seemed like an interesting challenge.

Who do you play in the show and how do you personally relate to your character?

Mrs. Dubose, the cranky, racist, morphine addicted elderly neighbor of the Finches is a clearly defined character that is both repellant and humorous. Fortunately, my friends have said “It”s a good thing the director was not type-casting!” I had to look closely at this character to see beyond her meanness and find some part of her that I could appreciate and share with the audience. I found that in her stoicism and determination to end her addiction to pain killers. She was probably never a very pleasant person but her private struggle and resolve humanize her. She reminds us that we never know what difficulties others are facing.

What is To Kill a Mockingbird about from the point of view of your character?

Mrs. Dubose serves two important roles in this story. First, she personifies the old South where segregation was cruelly institutionalized in a culture and an economy dependent on the labor of enslaved people. Scout, Jem, and Dill are the future. Through their eyes we see early signs that the old prejudices, injustices, and assumptions of “white privilege” will eventually be challenged.  Mrs. Dubose is not just resistant to these changing attitudes — she is completely unaware of them. The past and the future collide in the unjust accusation against Tom Robinson, the trial, the verdict, and finally the distress felt by the children, especially by Dill.

Second, it is through the example of Mrs. Dubose that Jem (and Scout) come to understand one of the most important lessons they learn from Atticus. That is, “You can never really understand a person until you walk around in his shoes and see things from his point of view.”  After her death Jem learns details about her struggle with pain and addiction that challenge his attitudes about her.

What scene or scenes were the most difficult to learn and why?

I have only two brief scenes where Mrs. Dubose has spoken lines. I can’t say they were difficult to learn. How she interacted with the other characters and her intent were both very clear and supported by the dialogue.

Which scene or scenes moves you the most? And why?

This play is so rich with moments that touch me it is difficult to choose just one. The tender moment when Scout escorts Mr. Arthur (Boo) Radley home; the deep conversations Atticus has with his precocious daughter; Mayella’s pained testimony at the trial where we see how desperate her life is as a result of her father’s cruelty. But, the most powerful scene for me is Tom Robinson’s testimony on cross examination. I am quite moved by his dignity. He understands very well that there can only be one outcome to the trial. The strength of his character shines through his fear. He innocently reveals that he gave assistance to Mayella  because he felt pity for her. His compassion made him vulnerable to the accusation; his naive belief that publicly acknowledging such pity could possibly be seen without judgment sealed his conviction.

Why is this show relevant for today’s theatregoers?

Eighty years after the 1935 setting for To Kill a Mockingbird, nearly 60 years after the historic Brown vs. The Board of Education decision, and 50 years after the Civil Rights Act was signed into law we still see regular examples of African American men and adolescents being subjected to violence at the hands of law officers with no justification. The arrest, conviction, and imprisonment rates of Blacks compared to Whites far exceed their percentage of the population in general. Tom Robinson is Rodney King, Michael Brown, Eric Garner, Floyd Dent, and countless others whose guilt was assumed solely based on race. Unfortunately, news reports tell us this story is just as relevant today as it was when the novel was published in 1960.

What have you learned about yourself as a person and an actor while learning and rehearsing your role?

I have learned that it is never too late to try something new! I was not sure I would be able to remember my lines and was relieved to see that I can.

What was the best advice your director Laura Andruski gave you on preparing and playing your character?

After the audition Laura simply said, “Just keep doing what you’re doing.” Her trust in me went a long way toward helping me feel confident in the acting choices I made.

For those people who love the film, what is different about the stage version and why should they come see it live on the stage?

Just as the film is necessarily different from the novel the stage version is different from the film. Through film a director can present multiple locations and take advantage of close-up camera shots. The stage imposes spatial constraints and requires a tighter span of time for the story to unfold. In both the novel and the film the events in To Kill a Mockingbird span three or four years. The stage version must compress the trial into one summer and fall. Also, scene changes on stage must be executed rapidly and not interrupt the flow of the action. Most of the action for this production takes place on the street with the Finch house, Mrs. Dubose’s house, and the Radley house as key features. A simple set change transforms the street into the courtroom for the trial.

Live theatre engages the imagination in ways that film does not. At a live performance the audience is a critical component of the entire experience. Audience and actors are all engaged in a common willing belief in a particular moment that a rabid dog is threatening the neighbors or that a tree with a knothole is growing there on stage. A kind of communication between actors and audience creates a unique experience each time the house lights dim.

What do you want audiences to take with them after seeing you perform in To Kill a Mockingbird?

I would hope that they see Mrs. Dubose as a fully realized character, not just a caricature of a feisty, difficult woman. I hope they see in her not only the ugly racism that has shaped her view of the world but also imagine the strength she draws upon to deal with her addiction. 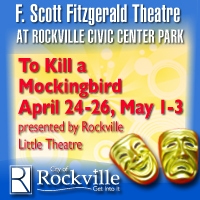 To Kill a Mockingbird plays from April 24 to May 3, 2015 at Rockville Little Theatre performing at F. Scott Fitzgerald Theatre at The Rockville Civic Center- 603 Edmonston Drive, in Rockville MD. For tickets, call the box office at (240) 314-8690, or purchase them online.

Meet the Cast of ‘To Kill a Mockingbird’ at Rockville Little Theatre: Part 1: Nancy Lark.

Meet the Cast of ‘To Kill a Mockingbird’ at Rockville Little Theatre: Part 2: Kieran Duffy.

Meet the Cast of ‘To Kill a Mockingbird’ at Rockville Little Theatre: Part 3: Stuart Rick.

Meet the Cast of ‘To Kill a Mockingbird’ at Rockville Little Theatre: Part 4: Kevin Page.