Shelagh Stephenson’s 1997 An Experiment with an Air Pump toggles between the dawn of the 19th and 21st centuries to examine the role of science in society, bioethics and the status of women at the time. Director Mary Lechter was able to bring out the emotion inherent in Airpump as well as sketch some of the important themes. 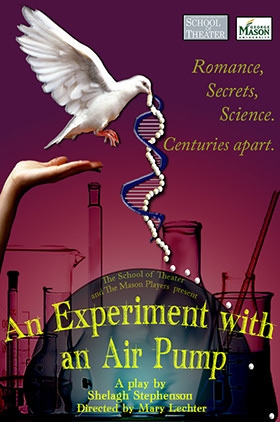 The standouts of the production were the design staff and the two cast members playing those of lowest rank, Rebecca Wahls as the hunchbacked Scottish maid in 1799, Isobel, and Gabe Zak as the contractor, Phil, in 1999.

Stephenson drew her inspiration from Joseph Wright’s 1767 painting, “An Experiment on a Bird in the Air Pump,” portraying the concept that life cannot exist in a vacuum. As the projection of the picture fades, its tableau is duplicated by the ensemble members on stage. Leading physician of his day, Dr. Fenwick, played by Sam Taylor, gives an exposition on the glory of science to his compatriots, Armstrong (Adam Lemos) and Roget (Justin Sumblin). They are accompanied by the women of the household, Susannah Fenwick (Madison Landis), and the two Fenwick young ladies, Harriet (Juliette Aeslestad) and Maria (Maggie Rodgers). Also present is the hunchbacked Scottish maid, Isobel (Rebecca Wahls).

From the outset, the design teams’ work impresses. Scenic design by Howard Vincent Kurtz places the 1799 action in a large formal drawing room befitting the times. One later sees the cleverness of the design when, with the turning of part of the central wall holding the fireplace and simultaneous rotation of two corner bookshelves, the formal drawing room becomes the almost bare space inhabited by a couple in 1999. The characters are dressed and coiffed as one would expect for 1799 and befittingly bland in 1999. Mailey Shimon is to be commended for showing restraint; the costuming supported, rather than overwhelmed, the characters.

Awareness of Reid May’s sound design is almost immediate. The action in Fenwick’s drawing room is backed by the sound of crowds outside, apparently rioting over socio-economic conditions, while Fenwick and his compatriots extoll the virtues of science as the engine of social improvements. As the play progresses, May provides an appropriate soundscapes to support the mood, including that of impending doom for Isobel. Autumn Casey’s lighting design worked hand in hand with the sound design to set mood and indicate transitions.

While in 1799, the males dominated the serious discussion and the women concerned themselves with matters of the heart, in 1999 it is the women, Ellen (Kathleen Barth) and Kate (Emily Gruver), who are the dominant scientists with Tom (Zach Wilcox), an english professor, serving as a reminder of social history. Phil (Gabe Zak), the contractor, serves as a social commentator and conscience.

The strongest link between the two time periods is the question of the extent to which humans should ‘play God’ in their scientific endeavors. In 1799, young physician Armstrong, ends up killing the hunchback maid, Isobel, in pursuit of an anatomical model of kyphosis (curvature of the spine). In 1999, the question of bioethics emerges through debate over a geneticist’s acceptance of a job in which pre-viable embryos are manipulated.

Isobel, played by Rebecca Wahls was the stand-out performer of the evening. Wahls never made her kyphosis a caricature. She comfortably inhabited a spot midway between the men’s scientific sparring and the women’s frippery. In today’s parlance, one would simply have to call her grounded. Yet, as a universal character, she was blinded by the possibility of love, leading her eventual downfall.

Only a small amount of time was spent in 1999 and the dialogue and course of events seemed very bare-boned compared to that in 1799. Gabe Zak as Phil, the contractor, showed considerable strength in these short, spare scenes. Neither overly attached to the past nor willing to jump blindfolded into the scientific vision of the future, he served as a fulcrum during the see-saw discussion of different approaches to science and society. One anchor for this position was his discovery of Isobel’s partial skeleton in the basement and determination of its use. More fortunate than Isobel, Phil simply walks off the set.

An attempt at full-on British pronunciation didn’t hit the mark. This made it harder to fully grasp the essential themes in the play and how they were being handled in both time periods. Given the relative importance of the times and themes rather than place, I wish that the dialogue were in American English.

Running Time: Two hours and 30 minutes with one intermission.

An Experiment with an Air Pump played at George Mason University’s Harris Theater, part of the Center for the Arts at George Mason University – 4373 Mason Pond Drive, in Fairfax, VA, from March 26 through April 4, 2015. Provided here are the links for the schedule of events and ticket sales for the venues comprising the Mason’s Center for the Arts.