As Signature bills it: “Whether you’d like to race Into the Woods with Sweeney Todd and a few Assassins, enjoy A Little Night Music at the Follies on a Saturday Night, or simply relish a Sunday in the Park with George, you’ll be in good Company when six Signature favorites and a gorgeous 16-piece orchestra take the stage to honor the genius himself, Stephen Sondheim.”

The performance begins with a rousing ensemble number “Merrily We Roll Along / Bounce” a mash-up of Sondheim’s 1981 musical Merrily We Roll Along and Road Show (previously titled Bounce), that introduces the all-star six-person cast and the range of their powerhouse voices. The three men of the ensemble followed with a touching performance of “Saturday Night” from Sondheim’s Saturday Night; the women followed suit with an upbeat and toe-tapping rendition of “You Could Drive a Person Crazy” from Company. With absolutely no narration between songs, the musical revue then takes you on a fluid, uninterrupted journey through the Sondheim songbook as the cast moves about on and off the stage—sometimes carrying a few props to set the scene. It’s an exciting musical theatre safari through the times.

Austin Colby was a standout performer of the evening, bringing comedic relief with his cow in “I Guess This is Goodbye” from Into the Woods and tear-jerking honesty in his solemn performance of “Is This What You Call Love?” from Passion.  His comedic timing was impeccable in “Impossible” from A Funny Thing Happened on the Way to the Forum, which he performed with Bobby Smith . Smith similarly dazzles in the second act’s “The Right Girl” from Follies. Paul Scanlan  was also a joy to watch during his solo number “Finishing the Hat” from Sunday in the Park with George, delivering a performance that would make Sondheim proud.

What’s amazing throughout the entire performance is that, while some musicals are grouped together in short segments, many pieces from the same musical are performed at various times throughout the show—requiring the actors and actresses to switch between roles at the snap of a finger, instantaneously changing the mood from lighthearted to somber and back with poise and finesse. The effect is a non-linear, musical mosaic of sorts—taking what Sondheim originally produced and, in a way, creating an entirely new musical experience. The whole becomes greater than the sum of its parts.

The ladies of the group dazzled without fail the entire show. Kellee Knighten Hough was my personal favorite in “Getting Married Today” from Company where she sang effortlessly through the fast-paced, up-tempo song that left me tongue-tied just listening to it!  Her sentimental cover of “I Wish I Could Forget You” from Passion showcased tenderness in her voice.

Donna Migliaccio— a Signature legend—was similarly brilliant. She received uproarious applause for her performance of “The Ladies Who Lunch” from Company, a song during which her powerhouse belting brought me goosebumps. Her hilarious rendition of “The Worst Pies in London” from Sweeney Todd showcased her impeccable comedic timing that only years of experience could produce.

Finally, Stephanie Waters was a tour-de-force, highlighted in “On the Steps of the Palace” from Into the Woods. Having played Cinderella in Signature’s production of the show previously, her finesse of the role came through as she stumbled about the stage barefoot, convincingly flitting mentally back-and-forth between solutions to her character’s dilemmas.Be sure to check out Simply Sondheim before it closes on April 19th! 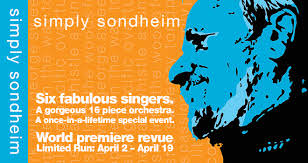