St. John Evangelical Lutheran Church has been taken over by Catholics! And they’re doing the Time Warp? Last night, St. John’s and Wolf Pack Theatre Company premiered their spring show, Nunsense, a musical comedy written by Dan Goggin and directed by Bill Leary. And it was ridiculous and fun!

The Little Sisters of Riverdale are struggling to raise money in response to a particularly grim chapter in their Orders’ catastrophe-prone history. Having few marketable skills but an excess of thwarted performers in their midst, the Sisters have decided to put on a variety show. Thus begins nearly two hours of musical numbers, dirty jokes, dance routines, pop culture references, prizes, and puppets. Audience participation is crucial, otherwise Reverend Mother has her ruler at the ready.

At a glance, it’s easy to try make comparisons with that other famous show about singing nuns, Sister Act. Aside from that one shared element, though, the two are pretty different. Nunsense has only a string of a plot tying it together, reappearing as necessary to move the show along or to crack jokes over. Most of the scenes are driven by individual personalities, problems, and motivations of the Sisters. And while there’s singing, don’t expect it to always be good. In fact, a lot of the acts are just bad. Purposefully so, in fact. The fact is, these nuns are absolutely, hilariously, woefully over their heads, and the cast and crew play it up for laughs from start to finish.

Jaime Crowne is the leader of the pack as Reverend Mother, Sister Mary Regina. She has a will of iron and she needs every bit of it to rein in her fellow sisters, though sometimes the feat is as impossible as herding cats.

Linda Whiting plays the Reverend Mother’s second in command, Mistress of Novices, Sister Mary Hubert. While both of these take charge women are wonderful to watch, their best moments are with each other. The word “frenemies” comes to mind with these two, as their power struggle is balanced by their shared frustration over their circumstances and the other sisters.

Joanna Matthews plays Sister Leo, a nun who doesn’t quite understand that she can’t be a nun and a ballerina at the same (and there’s a reason she’s one and not the other).

Brigid K. Lally plays the absent minded Sister Amnesia, whom everyone fervently hopes belongs to the Franciscans so she can be their problem instead.

Francine Joyce Kent puts on her best Brooklyn accent for the role of Sister Robert Anne, the Orders’ driver and the show’s understudy.

And Melanie Pino-Elliot has obviously made Julia Child her patron saint for the role of Sister Julia, Child of God; the convent’s cook and source of culinary calamity.

All of the ladies were funny, though Francine Joyce Kent as Sister Robert Anne was a definite scene stealer. The character, with her street smarts and burning desire to move up from the job of understudy, had lots of room for an abundance of silliness and heart, and Kent threw herself into it at every opportunity.

Nunsense is performed in the sanctuary of St. John’s. For some shows, the limits of such a space could present a problem, but it works in this case. The use of professional lights and spot lights in a small church just adds to the overall charmingly awkward atmosphere. The costumes are great; the Sisters look like nuns, the Brothers look like monks, and the Wicked Witch of the West looks like Margaret Hamilton. There are plenty of props which could possibly be handled better, but in the context of overwhelmed nuns, it works well enough.

Vince Evans and Stephen Beitzell manned the keyboards and computers on stage with the Sisters as Brothers Vince and Stephen respectively, often chiming in with one liners and helping with props. Dannielle Beitzell, who was in charge of outfitting everyone in their habits and robes, doubled as archery instructor and aim-averse spot light technician, Sister Mary Myopia. Kelly Richards was music director, Vanessa Berben was stage manager, and Deidre McCalaster was another technician. 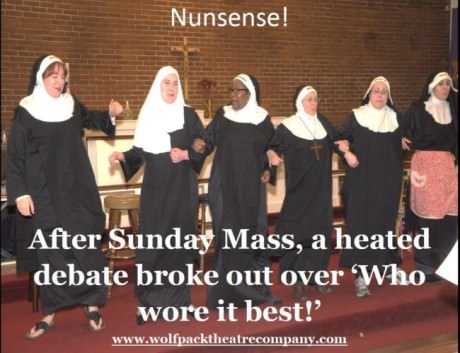 This review wouldn’t be complete without a nod to the concession stand. Featuring a variety of beverages, movie theater candies, cookies and cupcakes, the choices are staggering. And even better, the money you spend getting your sugar high goes to two great causes. All proceeds from Nunsense are going to two charities, Bountiful Blessings and Men Against Breast Cancer.

Bountiful Blessings is a Christian based charity which serves families of all faiths, helping the working poor and senior citizens procure non-food items like paper towels, which aren’t covered by food stamps.

Men Against Breast Cancer is the first and only non-profit designed to educate and empower men as they become caregivers to loved ones diagnosed with breast cancer.

Nunsense pokes a lot of fun at Christianity, with Catholicism taking the brunt of it, but in a true feat, they manage to keep the irreverence from turning offensive. We’re reminded that under their habits, nuns are still people, with hopes and dreams and desires that are every bit as ridiculous and unlikely as our own. Though the habits make them a lot funnier. So come see these Brides of Christ do a chorus line, and remember: never buy the plasma TV until you know you have the money.

Nunsense is playing through April 19, 2015 at Wolf Pack Theatre Company performing at St. John Evangelical Lutheran Church – 5820 Riverdale Road, in Riverdale, MD. There is an additional 3 pm matinee on the 18th. For ticket information and reservations, call (240) 271-5471, email dean912@live.com, or purchase them online.