Director Deb Gottesman and Musical Director Buzz Mauro could not have chosen a better piece for The Theatre Lab’s “Creating a Musical Role” class than the Marsha Norman/Lucy Simon musical. The Secret Garden is an emotional powerhouse, with a great variety of deeply felt characters of diverse ages, and a mosaic of beautiful and challenging songs. The Theatre Lab’s production features nearly forty actors, ranging from elementary school to retirement age. The size of the cast also means a great variety of experiences. The lead role of Mary Lennox is played by ten-year-old Ciara O’Toole; John Boulanger, who delivers the virtuoso role of her uncle, Archibald Craven, is a professional guest artist.

However, despite the educational purpose of the production or the diversity of the talent pool, the performance borders on minimalist perfection. There is not a weak link among the singers, dialects ranging from Indian, to Yorkshire, to standard British are nicely tuned, and many of the actors are delivering polished, intuitive work within the obvious challenge of such a lush score. O’Toole captures Mary’s outbursts and loneliness with a precision rarely seen even among older, more experienced actors. Tina Ghandchilar, who plays Martha, a housemaid who cares for Mary and becomes her confidant, subtly works her way through challenging solos (“Hold On” and “A Fine White Horse”) with detailed responses and subtext, as she cleverly manipulates Mary out of her sour, wounded shell.

In a very strong ensemble, the exceptional performances come from Anna Phillips-Brown as the loving ghost of Archibald’s wife, Lily and Quinn McCord as Dr. Neville Craven, Archibald’s jealous, emotionally conflicted brother.  Both handle the space’s acoustical problems and are always audible (even when McCord is staged high above the audience on the stage left balcony), and Phillips-Brown’s gorgeous lyric soprano voice and McCord’s specific, flawlessly timed tactics and emotional rhythms drive the domestic conflicts that are at the core of the action.

Gottesman and her design team (Angelo Merenda, set; Marianne Meadows, lighting) keep the production focused on the music and performances.  In fact, as Nicholas Miles (Martha’s brother Dickon, whose “Winters on the Wing” is one of the more exciting moments in the production) or Rob Weinzimer (who earns some of the best laughs as Ben Weatherstaff, the aging gardener) travel through the LED-decorated shrubs that represent the house gardens during “It’s a Maze,” or O’Toole or Boulanger wander terrified through the pillars under the balcony during “I Heard Someone Crying” and “Where in the World,” respectively, the production feels much like a beautifully staged, perfectly sung recital. It is sometimes difficult to hear Norman’s lyrics in the acoustically challenging space, but this is the only notable shortcoming in a production that is absolutely worthy of the powerful, haunting, and beloved Frances Hodgson Burnett novel on which the musical is based.

Running Time: 2 hours and 30 minutes, with a 10-minute intermission. 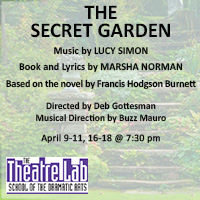 The Secret Garden plays through April 18, 2015 at The Theatre Lab – 733 8th Street NW, in Washington, DC. For tickets, purchase them at the door or online.