Fools by Neil Simon opened this weekend presented by the APL Drama Club located on the Johns Hopkins Applied Physics Lab campus in Laurel, MD.  The members and performers are mostly the scientists, engineers, and support staff that work on the campus.

Fools is not your typical Neil Simon comedy. It is closer in style to the works of his old friend, Mel Brooks. It is more Marx Brothers than Noel Coward. The story takes place in a village in Russia that had a curse put on it 200 years ago. Everyone in the village is unable to learn or be taught, and are simply fools forever. And there are a lot of laughs to be had.

There is a great deal that does not make sense, like, how do the peasants remember how to grow crops, raise children, cook etc? But like a Will Farrell movie, you leave reality at the door. The theme of the play is whether knowledge is happiness or are we happier ignorant. The subtheme is whether you have to know in your brain you are in love or is it your actions that express love. Got that?

Into this little town comes a teacher. He finds out that if he can teach Sophia, (the lovely but dumb daughter of the town doctor) in one day he can break the curse. The teacher falls in love with the beautiful girl, but she is unable to reciprocate because of the curse which also says that she cannot love. If he cannot do this, the only other way to break the curse is for Sophia to marry the Count whose family set the curse all those years ago.

Before the play there is a short film about the cast, director, and crew produced by Scott Lichtor, Zaza Soriano, and Rebecca Koslover. It is a bit of whimsy and also partly an enticement to join the APL Drama Club. The part I enjoyed the most was the end where they showed the set being built from scratch through time lapse photography. I thought it was a good educational glimpse for many who came with their family as well as those of us who have put sets together. There is also an improvisational group and a puppet show and puppet making class before the show.

Director Lynn Reggia does a fine job with the cast, which has many non-seasoned actors. Her staging is fluid and the actors are well-rehearsed. The pacing is fairly fast as it should be in a farce. I did think, however, that Act II went much more smoothly.

Artistic Director Annie Marcotte’s set design was excellent. I have helped mount productions on this stage, and I know how hard creating a functional but interesting set can be. Ms. Marcotte and her assistants created one that is functional, interesting, and colorful. It allows the transitions from the village to the doctor’s home without being confusing. The costumes by Julia Anderson and Susannah Sack captured the village and the characters in their simplicity. Bill Rogers’ lighting and A/V work (slides and movie) by Eric Chang ably helped to tell the story.

The teacher, Leon Tolchinsky, is played by Adam Fosbury, who delivered am admirable performance on this huge role that has many lines and several asides to the audience. Fosbury creates a pleasant character with whom we can easily identify. 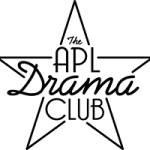 Tonight Sophia Zubritsky was played by Katie Marcotte. She captured the sweetness and mental dullness of the character without making her seem like she is someone to be pitied. The same is true for Raj Ashar and Shannon Willing who play her parents – Dr. Zubritsky and Lenya Zubritsky. Ashar reminds me a little of Groucho Marx. Asher and Willing also capture the close relationship of the couple, despite being unable to love due to the curse.

Jeff Dunne is a standout as Count Gregor Youskevitch. His character gets the most laughs, and the actor’s energy heightens the production when he appears. I also enjoyed the portrayals of the local village people by Dave Zotian, John O’Brien, Nate Parsons, Daniel Brandt and Annie Marcotte. My favorite was the mailman, Mishkin (David Brandt) that I believe was a little poke by Simon at our modern mail service. Rounding out the cast were Rebecca Koslover (who will alternate with Katie Marcotte as Sophia), David Edell, and Alan Landay.

With no charge for admission, a neat pre-show program, a fun production and laughs, and some post-show repast (cookies, drinks, fruit, etc.) driving up to APL to see Fools is a wise thing to do.

Running Time: One hour and 50 minutes, with one intermission. This does not include the pre-show program.

Tickets are free and available at the door, but seating is limited and the shows fill up so come early.