Last night, on the 150th anniversary of the assassination of President Lincoln at Ford’s Theatre, I was in a DC theater venue of a very different sort: a tiny white-box art-gallery space down an alleyway in Columbia Heights. There for a little over an hour I sat enthralled by a tour de force performance of a tough-minded two-hander about the notorious actor who fired the fatal shot. And by the end my brain was burning with a blistering depiction of what made the killer tick. 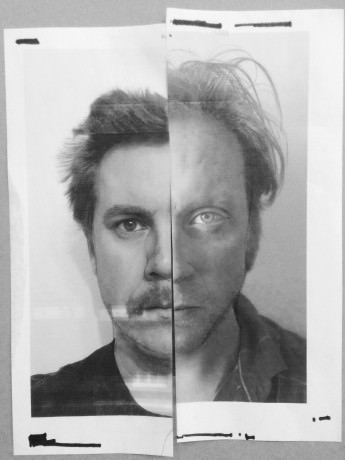 Don’t Die in the Dark is a sweeping and stunning one-act by Joe Brack, directed with exquisite intensity by Matty Griffiths, and acted electrifyingly by Brack himself as John Wilkes Booth and Bradley Foster Smith playing multiple roles, singing, and playing guitar and harmonica (the program calls him “Guitar”). What this triumvirate of talents has achieved is quite simply a triumph.

The historical research evidenced in Brack’s script was overwhelming in its reach; its cumulative effect was a density of content and language and seriousness of intent that I associate with classic epics, not pop-up one-acts. Frequently we see Booth performing excerpts from the roles he was renowned for in life, and these scenery-chewing turns not only impress us as theater but illuminate the character of the man who is playing those characters. Booth emerges as a villain who became vainglorious because of crippling insecurity.

Don’t Die in the Dark vividly explores the mind of someone who all his life was intimidated by his famous-actor father and his famous-actor brother—and who grew up desperate to ameliorate his own sense of inferiority by asserting superiority over others. Working from the historical record, Brack takes us deep inside the twisted mental state of a privileged white man, acclaimed for his artistry and munificently rewarded for it, whose racism came to consume him. Booth was obsessed with maintaining slavery, and hated Lincoln for emancipating slaves, thereby permitting—in the chilling words of Brack’s script—”nigger citizenship.” One of many revealing passages in Brack’s play comes when Booth defends slavery by saying he has seen fathers in the North treat their sons with more brutality than white masters in the South treat their Negro slaves.

But the power of this performance transcends what happens on stage. It becomes what goes on in one’s own mind. The connections Brack uncovers in Booth’s biography keep resonating long after the play ends. And if now and then during it you imagine you may have heard echoes of Booth’s contempt recently in contemporary America, be not surprised.

This play tells an important part of the story of our nation. It belongs onstage at Ford’s.

Running Time: one hour 15 minutes, with no intermission.