This dance variety show featuring undergraduate choreography and dancers unfolds with a consistent contemporary theme, but some pieces achieve more variety of movement than others. 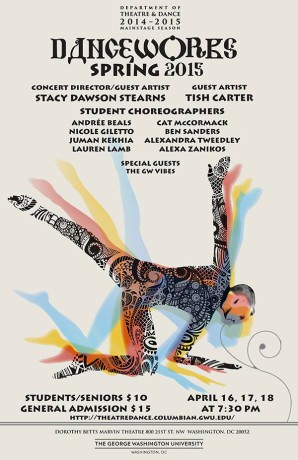 These Five Women, from Cat McCormack, a senior, revved the program into gear with an understated ferocity. The five female dancers, clad in long, black gowns, navigated a floor covered in paper flowers like opera divas determined for some extra stage-time. Supercilious gazes are held; grand batmans are flicked with power; and several women, close to the floor, supported by elbows, crawl their feet up their standing partners’ legs. It was a push against not only each other, but time, and a creepy elastic quality seeped through the tango-esque rhythm. The clean-up crew that followed (for those confetti flowers – blast!) broke the established mood. Unfortunately, the stage became Times Square post-Ball-drop, and should have capped off the night.

Juman Kekhia, a junior, created a lovely, light mood in the next work, serendipitous connections. Four female dancers, wearing blue skirts and cropped pastel tops, flitted, flowed, and frolicked like the isters (sans the stormy Mary) on their way to Meryton – but even Elizabeth had her partly cloudy days, and small rays of drama peeking through the sunlight would have brought more intrigue. The piece operates in one chapter – the happy ending – and in one dynamic: mellow, mezzo piano.

Disappearing Amber, features the standout choreography of the night from junior Lauren Lamb and the standout dance performance from freshman Isabella Salinas. Hums and guitar strums appear and reappear in the music, Azawade, by The Toure-Raichel Collective, and enhance the tropes in Lamb’s movements: shoulder rolling, foot tapping, hands coyly covering the mouth, controlled teetering in second position with one flexed foot turning in, then out, then back in, even smooth scooting on the floor in a bent first position. Lamb dabbles in repetition, but doesn’t over-indulge. Salinas, thankfully, indulges in expressing Lamb’s choreography and connects its individual components. We forget that Lamb taught her isolated steps and instead see a finished, coherent product. Salinas runs with purpose, snaps her head, then sways, softly. Hers is artistry, not rote reproduction and she distinguishes herself in this ensemble.

Some pieces are performance art rather than technique-based dance. The Beekeeper, The Matador, The Water Walker, in three parts from Guest Artist Tish Carter, includes a glittering, gold beekeeper costume, authentic bullfighting footage and photographs, plus jumbo-sized, blue plastic wrap which dancer Ben Sanders, a junior (who did seem to have more dance training), unrolls across the stage then swoops over with poise—doodied up in a dapper Gatsby suit, no less. The touch of arching foot to plastic makes a liquid-like crinkling sound (is the old sport cavorting in his fountain, waiting for the last party guests to leave?), but ultimately distracts from his nice lines. He, and the two students in the first and second sections, seemed consumed by these conspicuous props.

Kudos to vocalist Erin Jones, a senior, in Alexandra Tweedley’s satisfying, vintage-inspired Distorted Memory, for stepping into a dance role, then singing a nice rendition of George and Ira Gershwin’s “Someone to Watch Over Me,”then stepping back into her dancing. Her graceful energy was palpable; she even lingered on stage after the back-up dancers had already – well, backed into the wings.

In an abrupt, but refreshing, genre about-face, four spiders slink on in Alexa Zanikos’ spooky Standing in the Mist Under a Haunted Tree.” Attention grabbed (webbed?). A captured girl plot downstage meshes with the uncanny cronies creeping parallel; however, choreography was sacrificed for creepiness toward the middle and end of this dark fairy tale.

If heading with friends to cheer on friends in this weekend’s DanceWorks production, snag a spot on the left side of the theater for the best view of Lauren Lamb’s Disappearing Amber. Her choreography, and Isabella Salinas’ interpretation of it, is worth the ticket price alone.