33 years after they began, The Soul Crackers deliver tight, in-the-pocket covers from all-star soul, Motown and 70’s Funk bands. For over three hours, the band drove from one song directly to the next. The scope of their repertoire was mind-boggling and included artists from Jr. Walker & the All Stars, The Four Tops and Otis Redding to the Average White Band, Sly and the Family Stone, Tower of Power, Jimi Hendrix, and Stevie Wonder. 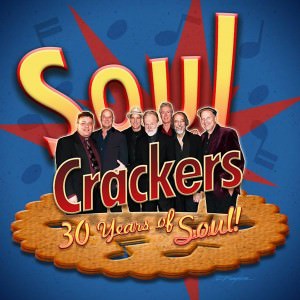 The Soul Crackers formed in 1982 when singer Tommy Lepson joined up with several other veterans of the DC rhythm and blues scene. The remaining founders include Lepson, drummer Chuck Sullivan, and bassist Ronnie Newmyer. After two years, the band split into several groups playing original music.

But fans wanted more of The Soul Crackers, leading to a once-a-year reunion at Christmas from 1984 – 2000. Eventually, the December reunion shows became such an attraction that the members felt there was enough demand that they should consider re-uniting and playing together more regularly.

And we’re fortunate they did. According to bassist Ronnie Newmyer, “The band seems to have a special chemistry borne of many long friendships … making it greater than the sum of its parts. What was once a band of young gun musicians out to impress has grown to become a group of veteran musicians sharing a 35 year history around the DC music scene.”

Lead vocalist Tommy Lepson is a wonder. Whether singing Redding’s “I’ve Been Loving You Too Long,” or Jimi Hendrix, “Crosstown Traffic,” Lepson and his band capture the essence of each number without the need for mimicry. It is no surprise that he has been inducted into the Washington Area Music Association Hall of Fame among other honors. Lepson and keyboardist Spencer Hoopes appeared to have a mind meld throughout the evening to the point that Lepson would join Hoopes on the keyboard.

Throughout the evening, the horn section with Wayne Sulc on sax and Chris Hutton on trumpet, is right on the money. In addition, they provide a two-man dance troupe that more than makes up for the absence of swaying back-up singers. In “Funky Broadway” and several other numbers, one or both of the horn section dominated the breaks.

From the beginning, Keith Grimes weaves in and out of the music, at times taking the break such as during “Flash in the Pan,” and at other times, falling back into a supporting role. Drummer Chuck Sullivan melded into the music — always there but never overwhelming the other musicians. The other rhythm section member, Ronnie Newmyer on bass, played a similar role.

The Soul Crackers played a mix of singles and medleys. My reaction to all was “I wish I could go up and dance rather than take notes.” I responded better to some of the medleys, such as Jr. Walker and the All Stars and Stevie Wonder, because I am so familiar with their catalogues. Medleys of the Average White Band and WAR were less intriguing simply because I am not as familiar with their work.

Unfortunately, there is no easy way to find out about The Soul Crackers’ upcoming shows. The little information that exists can be found on their Facebook page. For those who can’t wait for a taste of The Soul Crackers, you can purchase 30 Years of Soul.

Running Time: Three hours and 15 minutes, with one 20-minute intermission.