Previous positive experiences with the DC Women’s Theatre Group primed me for a touching performance. A Prude’s Guide to Good Sex needs some fine-tuning before it lives up to the expectations set by some of the Group’s earlier productions.

The Group’s mission is reason enough to support their productions. The sole goal is to provide a venue for women of all levels of experience, age, race and sexual orientation to come together to create and present female centered material. Often, when access to the arts is discussed, it is framed in terms of consumption of art, not its production. For women who have always wanted to be involved in theater, but shied away because of lack of formal training, this is your chance.

According to Serina Freeman, the playwright, and director, “This play is an opportunity for women to embrace their sexuality, while acknowledging the need to shoot down many commonly accepted social stigmas.  We have the ability to define every role in our lives, and hopefully this production will give all of us a much needed platform to begin the discussion to do just that.” 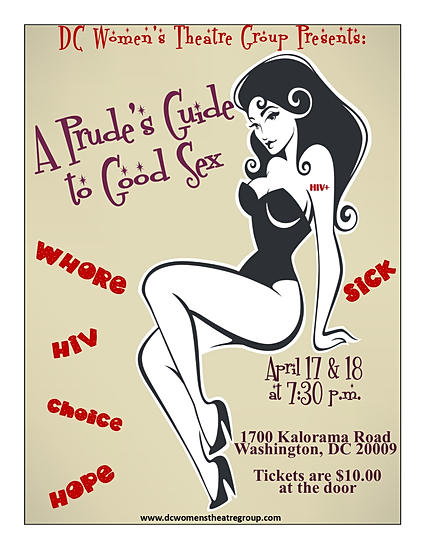 The play revolves around a woman who walls herself off from the world by writing a relationship and sex column under the nom de plume of Samantha.  We later find out that she is HIV positive.  ‘Samantha’ and her sister are reviewing some of the letters received and her responses to pick those to be included in a book.

After re-reading the letters, ‘Samantha’ loudly proclaims that she, too, is HIV positive and is going to leave her safety zone of ‘Dear Samantha’ and go forth into the world.

I would like to see this play again in a venue like the 2015 Capital Fringe Fringe Festival after more work is completed on the emotional connections and an earlier disclosure of ‘Samantha’s’ HIV positive status.

A video of an earlier show: