No, she is not. But in the year “1400, either more or less exactly,” per playwright Christopher Fry’s prefiguratively imprecise formulation, written in the aftermath of the, for many, apocalyptic Second World War, women like the beauteous Jennet Jourdemayne, who found themselves “accuse[d] of such a brainstorm of absurdities/That my fear dissolves in the humor of it,” often found little relief, either emotional, practical, or comical, in the power of simple, rational assertions.

The action takes place in an English market village, and opens in the office of the Mayor. The set, by Jim Porter, is done in delicate colors, with occasional accents: tiled light-gray floor, cherrywood chairs with shield-shaped backs upholstered in ecru and pale peach, a huge wooden cross behind the middle one. A circular wooden plaque with a red heraldic lion hangs at stage left; a large rectangular red-covered settee rests at stage back, below a multi-paned double window reaching to the ceiling. Four floor-to-ceiling entryways with triangular tops are equidistantly spaced along the walls, which are covered in a light gold, floral motif.

All so civilized. Surely, such elegance must furnish and bespeak a place of justice and serenity.

As the play opens, Richard (Molly Beckett), an orphan and the Mayor’s copying clerk, is busily at work. He is approached by Thomas Mendip (Isaiah Silvers), a recently discharged soldier, who tells the startled Richard he has a request to make of the Mayor: he wants to be hanged. “… I have left/ Rings of beer on every alehouse table…/ But each time I thought I was on the way/ To a faintly festive hiccup/ The sight of the damn world sobered me up again.”

Well OK, but still: to be hanged? Isn’t that a bit… extreme? Perhaps; but grounded in fact. The character, and to an extent the play, was inspired in part by the words of a convict who had falsely confessed to a murder the year before, saying that “It was worth while being hung to be a hero, seeing that life was not really worth living.”

And with this paradoxical backdrop, this disjointed admixture of unseeing gentility and blind futility, the play begins. Like the great Elizabethan dramatists, Fry seeds his narrative and characters with elements of contradiction, perplexity, and unpredictability. Unlike the Absurdists, he does not anticipate that the end result will be fertilizer.

Enter the graceful Alizon Eliot (Zoe DeGrazia) in a gown of beige satin (costumes by Wendy Eck and Dianne Dumais), her long, full, platinum-blond hair ending in a cluster of dark blond plaits down her back. Thomas, clad in rustic brown and bright tan with gold chain mail down the sleeves, has an interesting exchange with Alizon, who chides him for appearing to take pride in his difficult childhood: “You mustn’t let it make you conceited./Pride is one of the deadly sins.” Responds Thomas: “And it’s better to go for the lively ones.” Silvers, a largely emotionless Thomas, whose dryness can be seen as a reaction to his early and continuing hardships, effectively conveys the subtle humor and ambiguity of this observation.

Although promised in marriage to the Mayor’s nephew Humphrey (Maddy Sperber-Whyte), Alizon feels drawn to Richard, to whom Thomas has described her in somewhat less personal terms (“…I saw her/ Walking in the garden beside a substantial nun./ Whsst! Revelation!”). Given, however, that Humphrey’s brother Nicholas (Blythe Reiffen) has—or so he says—just killed him in a duel over Alizon and left him lying in the garden, things may be looking up. (If not, perhaps, for Humphrey.)

Nicholas and Richard are sent to retrieve Humphrey, whom no one seems to believe is dead. (And he is not.) Sperber-White and Reiffen do a superb job making opposites out of two characters that could just as (if not more) easily be played as peas in a pod. The boys’ mother, Margaret (Tolly Colby), a literal standout in gold-trimmed orange cape accessorized with a huge, angular, multistory headdress (the chapeau equivalent of Carol Burnett’s Scarlett O’Hara shoulders) and a permanent sneer, is snippily dismissive of her sons; Colby’s command of the character’s cartoonish disagreeableness is a standout as well. (As is Carl Randolph’s Make-up Design.)

Time for the Mayor to enter the fray. Hebble Tyson (Ben Lickerman), in short grey beard and plum-colored doublet accented with a gold chain belt at the hip, is Margaret’s brother, and, in the end, no more agreeable: While refusing to hang Thomas based on his claims to have killed two men, he will prove himself all too ready to put Jennet Jourdemayne to the pyre based on others’ unfounded accusations that she is a witch. Lickerman locks in the slipperiness of the prototypical politician: we recognize him immediately. (I suspect that every audience member had names and faces pop into their consciousness as he spoke.)

Jennet (Natalie Behrends), despairing, has come to the Mayor for help, begging him to tell the populace that the ludicrous accusations that have been lodged against her, which she laughingly recounts in an effort to make light of them, are false. Instead, he repeatedly insists that Richard summon the constable to arrest her. As Thomas has observed: “He can see she’s a girl of property,/And the property goes to the town if she’s a witch;/She couldn’t have been more timely.” Indeed, he can see more; and in Act II, Justice Edward Tappercoom (a sober, sensible and, rare among the officials, evidently moral Natalie Gradwohl) will mock the Mayor for his roving eye.

The Chaplain (a wonderfully rubber-faced Sarah Trunk) enters, blathering about the wonders of the small things of the world, contemplation of which has caused him to be late. Thomas, repelled by the craven self-interest around him, announces that the world is coming to an end, and that he is the devil, and must be hanged. The Mayor is all too happy to accommodate him, and orders both him and Jennet arrested.

Jennet is young and beautiful, clothed in a dress of rich peacock blue that complements the long dark hair flowing down her back.  Deep-voiced and red-lipped, with a quiet wisdom beyond her years, in Act II she will profess her love for Thomas, and her desire that he live, and choose to do so. Behrends is enormously moving here, not just vocally but with eyes that are filled at once with water, and with fire: happily, the only fire that will touch her body.

This rarely seen play certainly caught fire, thanks not only to cast and crew, but to the masterful hand of Director David Minton, whose meticulous attention to historical and histrionic detail made the flame burn brightly and warmly. A special mention must also go to Sound Engineer Ron Murphy’s music, a cinema-like soundtrack of Renaissance and film music that hit all the right narrative and emotional notes.

Finally, it should be noted that in addition to the Shakespearean elements mentioned earlier, what could be called a “reverse Shakespeare” was also at play here: Instead of men or boys playing female roles, as they did in the time of the Bard, in this production five of the seven male roles were played by girls or young women, and so skillfully that the difference was barely, if at all discernible—or, borrowing from the playwright, played “either more or less exactly.” Judging from the capacity audience’s wildly enthusiastic reception, I’ll be hanged if it’s not “more.”

Running Time: 2 hours, with one intermission. 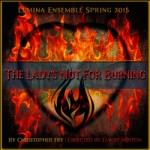 The Lady’s Not For Burning played at Lumina Studio Theatre on April 17-19, 2o15, performing  The Black Box Theatre – 8641 Colesville Road, in Silver Spring, MD. For information on their upcoming production of Hamlet on May 1-10, 2015, go to their website.