A fresh breeze blew into town last night and she was wearing rhinestone-encrusted cat eye glasses out to there, and a hot pink fringe gown glittering with Swarovski crystals. Yes, you guessed it – – the internationally infamous, dearly beloved, barb-slinging insultress known familiarly as Dame Edna. Trashing more Washington politicos than the Drudge Report at election time, the saucy senior can take down Jesus and the apostles in one slanderous swoop. “They wore the 50 shades of gray badly,” she sniped to an audience of Dame Edna’s Glorious Goodbye – The Farewell Tour (A meditation on loss, gender, climate change, gay marriage and ethnicity) takes on these weighty issues with showbiz and razzmatazz. Barry Humphries, who first channeled Mrs. Edna Everage in 1955 in Melbourne, Australia, is no stranger to the double-entendre. A veteran of Broadway and London’s West End theatres, the Tony Award-winning performer has been dazzling and dishing with faithful fans for over half a century.

Directed by Simon Phillips, the glitzy two-acter opens with film clip cameos of Hollywood celebs. Stars as disparate as Charlton Heston, Kelly Osbourne, and Hugh Jackman describe their run-ins with the naughty grandma as the glam goddess tells tales of her shabby Australian past, her dysfunctional children and her husband’s prostate “murmur.” Hoofing is provided by four leggy dancers who surround the mauve-haired wonder with giant purple ostrich fans. Move over Florence Ziegfeld!

Jonathan Tessero is the production’s Musical Director & Onstage Accompanist and Wayne Barker and Andrew Ross provide the tunes for the caterwauling songstress who describes herself as “the quintessence of kindness.” Never have scandal and sarcasm been such great pals.

In the second act Choreographer Eve Prideaux turns to Bollywood as Dame Edna describes her spiritual adventures in an ashram. “It’s a trailer park for the soul,” she moans as the dancers swirl around her in gold-edged saris.

But the real howls come when, as in years past, she singles out unsuspecting audience members. Claiming to be clairvoyant she tells one, “I believe in past lives and you look as if you might have been something.” Ouch! It hurts so good. To a group of elderly audience members she calls out, “Oh, the seniors are still here! Someone must have topped off their medication.” The zingers fly fast and furiously. You gotta keep up. She is as outrageous as she is captivating and as endearing as a child with Asberger’s (her diagnosis, not mine). 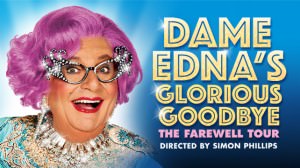