Rockville Little Theatre’s To Kill a Mockingbird ends their 2014-15 season on a smooth note. The play, based on the award-winning book by Harper Lee and adapted by Christopher Sergel, is set in Depression-era Maycomb, Alabama in 1935. A young girl, Scout Finch, lives with her father, Atticus Finch, an attorney, and her older brother Jem. A black man in town, Tom Robinson, is accused of raping a white woman, Mayella Ewell, and Atticus is his court-appointed attorney. This pits the white, racist townspeople against Atticus, which trickles down to both Jem and Scout at school. Some townspeople try to attack Tom, and demonstrate a clear willingness to hurt their friend Atticus in the process. The facts in the case pale against the backdrop of racism and injustice, and we as the audience experience this as the patrons and jurors in the Act II trial.

This story is narrated by a grown Scout, now going by her given name, Jean Louise. Portrayed with finesse, polish and folksy charm by Jill Goodrich, Jean Louise talks to the audience about her childhood, and then steps aside so we can watch her memories come to life. Goodrich knows exactly how to strike a balance between likeable and invisible, and though she didn’t interact with anyone on stage, she befriended every audience member with her likeable charm.

The set is terrific and deserves top-billing. It depicts a microcosm of this southern town, represented by three home fronts. These structures not only serve as playing space, but also represent the culture of this town. The three homes form a semi-circle on stage, with the audience sitting at the opening. This set uses the space judiciously, and took advantage of every corner possible. The courtroom set-up served its purpose; of particular note is the balcony for the “colored folk.”

Set Designer Steve Leshin cleverly placed the stairs facing upstage, so they were seen but not at the expense of the scenes. The ensemble made up the spectators, and was a far more compelling way to use them than if they had been cast as jury members. The jury was comprised of every patron in the theater audience, which allowed everyone watching to become a part of the action. This was an important and clever directorial decision by Director Laura Andruski.

Andruski knows how to make the most of an ensemble, and she does so again in this production. She carefully cast every actor with an eye on shape, size, vocal tone and vibe. All of the supporting characters brought something different to the landscape and the actors cast in these roles did them justice.

Two of the standouts are Mark Steimer as the upstanding Sheriff Heck Tate and Natalie McManus as loyal friend to and champion of Atticus, Miss Maudie. They exuded folksy sincerity and endeared us to them in their own ways. Steimer’s final scene toward the end of the play included a short but earnest mini-speech to Atticus, which received applause at its conclusion. It’s easy to imagine the delighted surprise on Steimer’s face as he exited upstage.

As Atticus Finch, Stuart Rick is reminiscent of Gregory Peck’s film version of Atticus, though the actor shared that he hasn’t seen the film in the last several decades. His tall stature, salt-and-pepper hair, deep, resonant voice, and unassuming manner convey everything that Atticus stands for without seeming preachy or unrelatable. He is exactly as his plucky daughter, Scout, describes him to be.

Speaking of plucky Scout, how fortunate for the audience that Sydney Q. Lauricella-Reed was cast in this role. This little actress has impeccable timing, a fantastic southern accent, charm oozing out of her overalls, and a sincerity that carries the audience through this journey. She delivers like a firecracker on the Fourth of July, and her chemistry with Mr. Rick makes theirs the best scenes in the show.

Unfortunately, Kiernan Duffy’s portrayal of Dill, the best friend of the Finch kids, was very disappointing. His body, facial expressions, and voice were more cartoonish than folksy, and his jerky and exaggerated walk was a major distraction during his scenes. 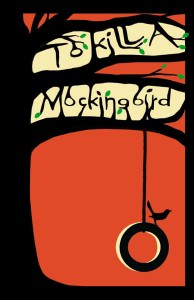 On the other hand, Donta Hensley is a standout as Tom Robinson, as he delivers an emotional, humble and moving performance. His time in the witness chair is the most compelling in Act II’s trial, as Tom tells his side of the story with hesitation, earnestness, and kindness. Hensley equally exudes both Tom’s horror at being accused of something so terrible and his fervent assertion of his innocence. The actor’s tears are from a deep place of understanding, and one can only imagine the bevy of emotions Hensley experienced preparing to portray a black man unjustly accused of a crime he didn’t commit. Bravo, Mr. Hensley.

Linda Swann’s costumes are the color of depression and charmingly oversized on almost everyone except Atticus, whose crisp yet modest suit appropriately separates him from the rest of the townsfolk. Kudos to Nancy Eynon Lark for coloring the landscape with set dressing and props, as well as to Sound Designer Daniel Bentz and Lighting Designer Rick Swink, who both create the right mood without bells and whistles.

Saunter on over to the F. Scott Fitzgerald Theatre for an evening of charm and societal importance. Rockville Little Theatre’s powerful production of To Kill a Mockingbird is riveting theatre and well worth the price of admission. It tells a story that, thankfully, feels more like a slice of history rather than a depiction of life today.

A note from the RLT production team: While Harper Lee’s novel is a part of the core curriculum for most Middle School and High School students, it does portray the racial injustices of the early 20th-century in stark and graphic terms, including liberal usage of racial epithets. The play also contains multiple references to sexual situations and domestic abuse, and may not be suitable for younger children. Parental discretion is advised.

Running Time: Two and a half hours, plus one intermission.

To Kill a Mockingbird plays throughMay 3, 2015 at Rockville Little Theatre performing at F. Scott Fitzgerald Theatre at The Rockville Civic Center- 603 Edmonston Drive, in Rockville MD. For tickets, call the box office at (240) 314-8690, or purchase them online.

LINKS
Meet the Cast of ‘To Kill a Mockingbird’ at Rockville Little Theatre: Part 1: Nancy Lark.

Meet the Cast of ‘To Kill a Mockingbird’ at Rockville Little Theatre: Part 2: Kieran Duffy.

Meet the Cast of ‘To Kill a Mockingbird’ at Rockville Little Theatre: Part 3: Stuart Rick.

Meet the Cast of ‘To Kill a Mockingbird’ at Rockville Little Theatre: Part 4: Kevin Page.

Meet the Cast of ‘To Kill a Mockingbird’ at Rockville Little Theatre: Part 5: Sydney Lauricella-Reed.

Meet the Cast of ‘To Kill a Mockingbird’ at Rockville Little Theatre: Part 6: Liz Weber.

Meet the Cast of ‘To Kill a Mockingbird’ at Rockville Little Theatre: Part 7: Jill Goodrich.

Meet the Cast of ‘To Kill a Mockingbird’ at Rockville Little Theatre: Part 8: Grant Williams.

Meet the Cast of ‘To Kill a Mockingbird’ at Rockville Little Theatre: Part 9: Todd Mazzie.