This will be a short review because I have respect for the creative team behind Doctor Zhivago, but disappointment in their relentlessly moving musical now at the Broadway Theatre. Boris Pasternak was an influential  Russian poet whose novel is the source material which attracted Michael Korie (lyricist Grey Gardens),  (co-wrote lyrics with Andrew Lloyd Webber on Sunset Boulevard) and Michael Weller (Moonchildren, his first play, established him as a playwright). Also on board are Lucy Simon (the composer had success with her first show, The Secret Garden) and Des McAnuff, a director with two Tony Awards and a vast background and varied experience in the development of new musicals. Zhivago is best known as an epic romance on film, one that starred Omar Sharif and Julie Christie. With a pedigree like this one, it is difficult to imagine how cumbersome is the musical that evolved.

For starters, there are too many characters and far too much plot to cover adequately in the time allotted a stage piece. As a result, the first half hour races through a dozen little scenes, which reminded me of the advance coming attractions one might see at a movie house. Actors ran on, said a few words, moved a bit of furniture, introduced a prop, dropped a name, and then fled.  All of them were singing something about “Two Worlds” but with a full blasted sound system blaring away, I defy anyone to be able to quote a single word. When things settled a bit, we were offered a cluttered book and some 26 musical numbers, interspersed with exploding bombs, several pistol shots, plenty of smoke, and a fire or two that looked terrifyingly real. Everything happened so quickly that I had to grab at key points — certainly the good Dr. Zhivago (capably played by Tam Mutu) has an instinctive attraction for Lara Guishar,  though it happens in this version so quickly it’s difficult to accept.

Written in the style of the early ’80s wall-to-wall musicals (Les Miz, Miss Saigon, The Phantom of the Opera) once considered ground breaking new works, it now seems overblown, a musical that takes itself far too seriously, perhaps because it does not have a score full of soaring melody, and its lyrics for the most part are predictable and self-important.  It has no helicopter, no falling chandelier, no barricades battle — well, actually it does have several of those, except the soldiers seem to be lying on the loading dock of  a truck, which serves as a wheeled flatbed that allows them all to be carted off to the wings when they are no longer needed. One of these wheeled exits, with what seemed like dozens of bodies aboard, seemed to roll them upstage, then dump them into the basement in a sort of mass burial.

There are songs that purport to be poetic. After all, Dr. Zhivago loves poetry and writes a good deal of it himself. Titles like “Blood on the Snow,” “Ashes and Tears,” “Watch The Moon,” “Love Finds You,” and “On The Edge of Time” give you an idea of the way his mind works. I did not feel connected to any of them, and that’s another problem. There are no living, breathing people up there on stage; all night long I heard speeches and dialogue by the number. I was rarely moved, or even involved. 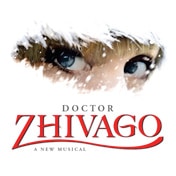 The program cover offers the suggestion of a snow-covered face out of which two very blue and intriguing eyes are giving us an encouraging, but furtive glance. It promises much in the way of intrigue and romance, and its story is set in a turbulent time in Russian history, but this group of talented artists have gone astray and come up with a bloated whale of a musical with no sign of a beating heart..

The cast is new to me, but Tam Muti’s background includes major work in London, including the leads in  Les Miz and Love Never Dies, Lloyd-Webber’s sequel to his Phantom. As Dr. Yuri Zhivago, he is stalwart, sings well, but lacks the movie star persona of Omar Sharif who played him on screen. Kelli Barrett, his Lara, has a large voice that can fill a theatre, but with this sound system as the wind beneath her wings, she can fill a football stadium. I’m reminded of a story about film star Bette Davis who once told her director on Dark Victory, that she’d rather walk up the stairs to her death alone in the final scene, unaccompanied by Max Steiner’s underscoring, which she was afraid would distract from her performance. She lost that battle, and she and the music walked the stairs together, and the movie was a big hit. In this case however, when Ms. Barrett hit her high notes the orchestra was right up there with her, virtually demanding we give resounding cheers. Many obliged, but I remained underwhelmed.

I hope this recent trend toward making musicals noisy, technological, blunt, concerned mostly with effects, externals, mechanical marvels is only a trend.  A number of future projects have been announced that sound ominous (King Kong, The Hunchback of Notre Dame). I’m sure Godzilla The Musical is on someone’s drawing board. In the case of Doctor Zhivago, explosions and gunshots help, and there are a lot of them in this tale of Russia in the early years of the 20th century. But to me, this latest approach to a dramatization of Boris Pasternak’s 1958 Nobel Prize winning novel, is the kind of gift-wrapped in boxes of diminishing size, leading down to the final one, in which the gift itself turns out to be something very small indeed.