A play by contributing writer John Stoltenberg will have a staged reading Sunday, May 3, 2015, at 2:00 pm at the MLK Library. John sat down with himself to pick his brain about it.

John: Readers of DCMetroTheaterArts know you as a writer about theater, not a writer for theater. What’s up with that?

John: I grew up writing stuff to be performed, starting with a puppet show when I was in fifth grade, and I wrote plays until my early 30s when I switched to nonfiction. So for me this staged reading is like having a recovered memory without the madeleine. Or like a prodigal playwright returns. Or like a strange simile mashup. 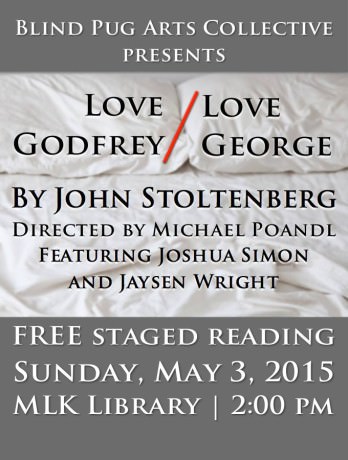 It’s about an hour.

You know what I meant.

It’s a love story about two men in their twenties: Godfrey, who is black and an out-of-work actor-model, and George, who is white and a church organist. The play begins in their bedroom just after they’ve had rambunctious sex. It’s a funny, sexy romantic comedy until suddenly it’s not. Midway through, the play takes a tragic turn, the story gets seriously sad, and Godfrey and George have to figure out what’s to become of their love.

Where and when is it set?

Because it’s a love story between two gay men who don’t live in a gay culture. Stonewall was 1969, but George and Godfrey weren’t aware of it. The movie Boys in the Band came out that year, but George and Godfrey would not have seen it and would not have recognized themselves in it if they had. Theirs is a playful bromance with benefits, and they’ve created their own culture, a private world of jokey references to the TV shows they watched as kids. Then suddenly the world crashes in and they must grow up.

Why are you asking me that? You know I did.

It was. What’s your point?

I showed Love Godfrey / Love George to Michael Poandl, whose byline also appears often on this site, and he liked the script and wanted to direct it so he told the Blind Pug Arts Collective folks about it, and they’re all schmoozy friends from AU, and so basically I lucked into this.

So would you say that selfie-Q&A is shameless self-promotion?