Hockadoo! After a few toe-tapping hours at The Warner Theatre with the cast of Memphis and their inspired singing and dancing, I still have no idea what “Hockadoo” means, but I know—without a doubt—that it’s absolutely infectious. 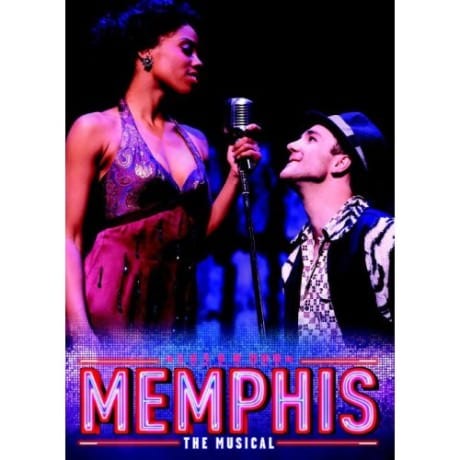 With music and lyrics by David Bryan and lyrics and book by Joe DiPietro, Memphis is a riotous celebration of the early days of rock ‘n’ roll in downtown Memphis, Tennessee. Enjoying a Broadway run from October 2009 to August 2012 that earned it four Tony Awards including the 2010 Tony Award for Best Musical, Memphis tells the story of DJ Huey Calhoun (Daniel S. Hines)—a slow, but well-meaning, country boy with a love of R&B music—and Felicia Farrell, an African-American singer who sings nightly at her brother’s seedy nightclub.

As the audience is brought on a whirlwind journey through their romance and unexpected rise to stardom, including the challenging subject of interracial romances in the 1950’s, Memphis balances the heart-pounding rock ‘n’ roll tunes that you might expect from a musical that takes place in the birthplace of rock ‘n’ roll—“the nightclubs, radio stations and recording studios of the musically-rich Tennessee city of Memphis”—with a generous helping of ballads and a few bluesy gospel numbers that gives Memphis its distinct and complex musical flair.

From the start, we are met with electrifying, toe-tapping numbers that highlight the best that this genre has to offer.  “Underground”, which sets the scene at Delray’s, an underground bar in 1950’s Memphis, is a killer opening number that gets the audience grooving right from the start as it celebrates the music that these characters love and fight for so poignantly. Delray (Keith McCoy) instantly captivates the audience with his low, deep voice—booming and powerful. This is the “music of the soul” that is referenced so many times throughout the show, and the opening number is a testament to why.

This style of bluesy rock ‘n’ roll is revisited throughout the night in big ensemble numbers like “Everybody Wants to Be Black on a Saturday Night” and the show-stopping finale song “Steal Your Rock ‘n’ Roll”. By the end of the show, some audience members were practically dancing in the aisles after a well-earned standing ovation.

These big dance numbers are interwoven with an eclectic mix of ballads and gospel songs that add to the musical diversity of the show. The second song of the night “The Music of My Soul” is a touching number in which Huey (Daniel S. Hines) shares his love for the music despite being culturally taboo; the penultimate song, “Memphis Lives in Me”, similarly captives how the music is literally his lifeblood. Hines delivers these songs authentically and charismatically, giving his character depth as Huey loses himself in the music of his soul.

His co-star, Zuri Washington as Felicia, shines in “Colored Woman,” a power ballad where she laments the lack of life opportunities for African-American women in the 1950s—a situation made more dire by the intolerance of those around her. Her rendition was tear-jerking and powerful—truly setting the emotional arc of the entire performance. Washington was able to carry her character’s emotional transformation from the first act to the second, demonstrating that she truly is a triple threat. She led the audience in a tender moment in the second act as her character contemplates leaving Memphis and Huey in the ballad “Love Will Stand When All Else Falls”.

Other numbers like “Make Me Stronger” and the closing number of Act I, “Say a Prayer”, are powerful tributes to gospel music that contrast nicely with the up-tempo rock ‘n’ roll and gentler ballads of the evening, creating a musical bridge that ties the show together. Mama (Pat Sibley) shines in  “Make Me Stronger” as she acts convincingly through the spiritual and cultural enlightenment of an open-minded, progressive mother living in the South. Gator (Jonathan David Randle), who is totally silent until the end of the first act, delivered a powerful a capella tune that left my eyes watering in “Say a Prayer”, which reminded me a bit of John Legend’s “Glory” in musical style and performance.

Memphis is billed as “filled with heart, soul and energy to burn.” It is that and so much more. As a musical set in a defining time in our nation’s history, Memphis celebrates the exuberance of rock ‘n’ roll, the beauty and controversy that often accompanies change, and some of the best that musical theatre has to offer.

Running Time: Approximately 2 hours and 30 minutes, including a 15-minute intermission.

Memphis plays through Saturday, May 2, 2015 at The Warner Theatre – 513 13th Street, in Washington, DC. For tickets, purchase them online. Check out the rest of the Memphis 2015 tour schedule here.