In Part 1 of a series of interviews with the cast of Once on This Island, meet Malcolm Lee.

Malcolm: Hello, I’m Malcolm Lee. You probably have seen me at The Little Theater of Alexandria in three of their productions (“Horse” in The Full Monty – WATCH Nominee, “Coalhouse Walker, Jr” in Ragtime, and “Eddie/Dr. Scott” in The Rocky Horror Picture Show). I’ve also been in Dominion Stage’s Dreamgirls playing “Jimmy” – WATCH Nominee, and Port City Playhouse’s Blues For An Alabama Sky as Guy Jacobs. I’ve done acting in high school and college. Never really had professional training.

This is the second production I’m doing with Creative Cauldron. I was in their production of Thunder Knocking on the Door as the twin Dupree brothers. I had a blast, and I heard they were doing this beautiful musical. I couldn’t pass up auditioning.

This is my first production of Once On This Island. I enjoy the freedom the actors have in this production, as well as the immense talent that is on the stage! I feel forever humbled working with these wonderful actors. 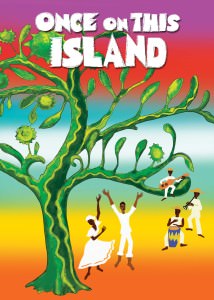 I’ll describe it in three words: complex, magical, and uplifting.

Yes I did. Ragtime as Coalhouse Walker, Jr.

I play Agwe; God of Water, as well as Armand: Daniel’s Father. The cast are all storytellers as well, so I’m a storyteller from time to time. My characters are very loud, in your face type of characters that makes you want to listen. I see myself as that type of person occasionally. Very comical at times as well.

Tell me about your big solo, and what do we learn about your character as you sing it?

Agwe is the god that starts Ti-Moune’s journey through love and death. He sets the stage by performing “Rain.” He creates the storm that have the two worlds meet on the island: the peasants and the grand hommes. As I said before, a big character that just “commands” the stage, and I’m excited to portray that feeling on stage.

I think that people can definitely relate to the power of choice, and what circumstances come with the choices you make. People will watch this and relate with love, loss, and sacrifice, as well as rejuvenation. To find that special someone involves finding yourself first, and the independence and bravery that Ti-Moune demonstrates in the play can seem anecdotal to some.

This show is a lot of fun, full of imagery, colors, and tons of energy. The music is very entertaining, and the effects will definitely have kids and grand kids interested in the show.

I want the audience to have fun! I want them to laugh, cry, dance and have a huge smile on their face at the end of the show. It’s a one act 90-minute show that will keep them interested and entertained. I want them to want to come see the show repeatedly to bring joy to their lives.