If Hamlet as a character is historically—and enduringly—shrouded in fog, the scene that greets us as we enter Lumina Studio Theatre’s production of Shakespeare’s eponymous play is more than a match for him. As light creeps in upon the murky stage, we see a large box on four short, stubby legs in the center, before it a smaller box comprising six cubes, each filled with small, indistinct figures. At stage right sits a huge, bulbous object covered in cheesecloth; beyond it stands a flat-screen TV with two incongruous silver antennae sprouting from the top in a tall “v.”

Shall we say: the time is out of joint?

As seen by Lumina and presented by the capable cast and production team under director David Minton, that very observation, upon Hamlet’s being commanded by his father’s “perturbèd spirit” to avenge his “Murder most foul, as in the best it is; / But this most foul, strange and unnatural,” applies to, informs, undergirds and interweaves the play as a whole.

As the scene opens, and the lights come up, the cloth is removed, and the great pale ball is transformed: it is now fire-engine red, with colored pegs projecting from it at intervals. (Kudos all around—and square, rectangular and omniform—to Set Designer Jim Porter and his team, Props Master Jeff Streuwing, and the highly imaginative lighting by Eve Vawter.)  It will serve, depending on who’s using it, as a place for a chase, a ball to hide behind, and a pillowy resting place.

Meanwhile, from the larger box emerge a dozen small people in colonial-style nightdresses with ruffled hems and caps (costumes by the ever-ingenious Wendy Eck and Dianne Dumais) and an adult-size young man. Also visible now is the stage back, which is configured like the small box, but life-size; characters will wander in and out of its cubes. To its right and to its left are video screens pumping out LED starfield projections.

The young man moves to the TV and sits before it, watching with interest as the screen flickers with loud, crass black-and-white commercials.On stage—the floor now cornflower blue with white swirls (no trick of the eye, but a matter of modestly exciting lighting)—while we weren’t looking, the innocent, childlike characters have been replaced by (turned into?) grotesque caricatures, their faces smooth, hard, and brightly colored, their features wildly distorted.

As has the young man, who now sports chipmunk cheeks and plastic hair. (The make-up design, including these magnificent masks, is by Carl Randolph, who produced over 130 of them, each individually designed and fitted.)

The young man? His name is Hamlet.

“All the world’s a stage,” begins a character center stage, grandiloquently cribbing from As You Like It but humorously and astutely linking and contemporizing some of its references. “Castle Elsinore” reads a sign on the back wall, below it a drawing of the king, beside the drawing a red door.  And the courtiers—yes, the costumes have again changed—dance to a tune equal parts Renaissance and outer space, gracefully plucked by strings and tooted by woodwinds (music by Philip Glass).

As the über-politician Claudius (his pseudo-openness and honesty masterfully manifested by Thomas Schoppert, with Elizabeth Carney an equally subtly, if visually more viscerally, grasping Gertrude) commences his opening speech, announcing to one and all his betrothal to “our sometime sister, now our queen,” our attention shifts to the TV, which, richly, has begun blaring out the “Masterpiece Theatre” theme. A white-bearded man, seated in a book-lined study, sagely advises us that parts of the play (yes, the one presently happening onstage) may have been cut due to “funding considerations.”

Perhaps so; but parts have also been added. At the graveyard, which Hamlet (Dominic Massimino) and Horatio (Neil Pennington) visit to investigate the reported ghost of Hamlet’s father, its image is projected on the upper-level video screens. But that’s only the teaser, perhaps to falsely assuage us: a digital vampire—hideously red-eyed, white-masked, teeth bared, skeletal, sepulchral—springs wildly, terrifyingly from the center of the stage. As a miked voice intones, horror-film style, “Welcome to Shock Theater,” disfigured ghouls and mustachioed mad scientists, some aping Einstein and others Groucho, swarm and race about the stage.

No, this is not your father’s Hamlet.  (Not to mention his.)

A familiar-sounding voice (if you’re of a certain age, or a fan of the tube of the fifties) emanating from stage right summons our attention back to the flat-screen TV, where we see a man in a suit, standing before a huge police badge. “Ladies and gentlemen: the story you are about to hear is true. Only the names have been changed to protect the innocent.” And his name? “Titus Andronicus.” No, Hamlet isn’t as bloody as the Bard’s most violent play. But both being so-called revenge tragedies, as well as entailing the suicide of a female protagonist who has had, shall we say, bad luck with the men in her life, both could arguably be said to involve “a little more than kin, and less than kind.”

In a switch from the original, wherein Hamlet, having confronted the ghost with Horatio and Marcellus, declares to them, “The time is out of joint. O cursèd spite,/That ever I was born to set it right!” in Minton’s concept the others have already left, and Hamlet’s statement of what could come off as dismay sounds more, as declared by Massimino, like determination.  Indeed, Massimino makes an excellent Hamlet. His face, even when enlarged and rounded by the mask, is deeply expressive—the eyes flash anger or evince pain, the jaw juts, the mouth grimaces—while remaining structurally marionette-like.

In the famed soliloquy “Now I am alone./O, what a rogue and peasant slave am I!”, in which Hamlet decries his inability to take action to avenge his own father’s murder while the actor he just watched wept passionately for a character in a play, Massimino’s Hamlet furiously rips off his mask at the climactic words , “. . . bloody, bawdy villain!/Remorseless, treacherous, lecherous, kindless villain!/O, vengeance!” No longer a “dull and muddy-mettled rascal,” but someone forthrightly (and literally) “facing” the world, he is now a man with a plan, excitement slowly infusing his newly assured, crisply quotidian voice and demeanor as he hatches one to “catch the conscience of the king.”

Here Massimino (and, I daresay, Minton) shows us a Hamlet whose psychological transformation is physically objectified, and at once also simplified and amplified. Tho Massimino still has to grow into the speech a bit to fully realize its potential, it struck this viewer, in concept and interpretation, as both vivid and valid. The mask will be donned again and removed again as contextually appropriate: for example, pulled off for the iconic “To be, or not to be . . .” and at just the right moment in the last (written) scene of the play.

Hamlet will also, speaking a line that seems made for this, pull off Ophelia’s mask as he excoriates her, and women in general, for wearing makeup: “. . . God/has given you one face, and you make yourselves/ another:”.  As Ophelia, Grace Sperber-Whyte, in long, auburn Shirley Temple curls and smocks, is sweet and bewildered, a fragile Ophelia being used by her father without being fully cognizant of it, nor of the effect it must needs have on Hamlet, whom she is still able to display the wit and strength to challenge—but, constrained by her essential trust and goodness, mortally not to match.

Her father Polonius’s (Jadyn Brick) famed “Neither a borrower nor a lender be” lecture is done, amusingly, with a flip chart.  At once obliviously wacky and convinced that he’s wise, his hair white and wild, long and stringy, Brick’s Polonius elicits laughter tinged with scorn and a small side order of sympathy.  The latter lasts until, of course, he self-Rosencrantz and Guildenstern (adeptly played Sophia Varnai and Raina Greifer, who give their cipher-like characters character), at turns seemingly clued in and a quart short of a gallon, are dressed in harlequin garb, and caps—one red, one blue—with spinning whirligigs atop them.

What in the original play is the concluding scene swiftly, increasingly elevates the dramatic tension and intensity. The masks will have their place; their removal and replacement will signify who, both physically and metaphysically, is fighting whom. As Ophelia’s brother Laertes, Martin Glusker affectingly portrays the youthful love, devotion and loyalty of a brother; his fight to the death with Hamlet, who has more to gain and more to lose than his life, shows him to be a man capable of strong emotion, and gentle nobility.

He could not have a more opposite opponent than Massimino’s Hamlet. Yet in the end, both are (as a contemporary, rather than fifties sitcom would have it) equally dead.

The play, needless to say, lives on. This spring, it does so vitally, vibrantly and inventively, at Lumina Studio Theatre.

This a review of the ‘Blue Cast.’ 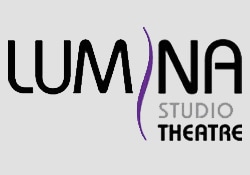 Hamlet plays through May 10, 2015 at Lumina Studio Theatre performing at The Black Box Theatre – 8641 Colesville Road, in Silver Spring, MD. Purchase tickets for the Blue Cast here and for the Red Cast here.