In 1949, Pulitzer Prize winning author and film critic James Agee wrote a screenplay  treatment for Charlie Chaplin, that has since been titled Tramp’s New World.

His screenplay does just that: Chaplin’s classic Tramp awakes to find himself in a post-apocalyptic world. 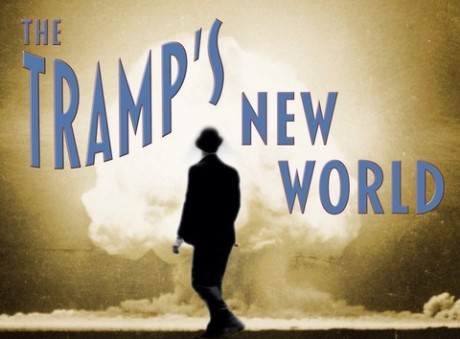 Chaplin rejected the screenplay: its dark, dark comic perspective perhaps too dark, or too controversial, considering Joe McCarthy’s rise to national prominence and Chaplin’s own official banning from the US in 1953.

Rob Jansen has created a multi-media adaptation of Agee’s “lost” screenplay, and it is now playing at the Mead Theatre Lab in downtown DC.

At its strongest Tramp directly engages its audience.

The super bomb has just exploded: humanity is gone, except for the Tramp. Then he discovers us, the audience, watching him from our seats inside the theatre.

Within that relationship the whole play rests, for more than anything Tramp explores the human dimension. In a world gone wild on technology and science will the human still be valuable?

As the Tramp seeks the audience’s aid in helping him set up his crude film projector, we are in rapt attention.

Rob Jansen, the writer, adapter, and performer of Tramp’s New World, is an engaging performer. His presence and non-verbal communication skills are delightful.

He cranks up his generator and the film within the play starts with a flicker.

From that moment forward, however, the performance-piece begins to wander, touching on various speeches, story elements, and documentary style clips as it describes the film that we hope to see.

Andrew Cohen designed the set for Tramp. Simple, yet effective, we are offered the iconic, homeless Tramp of the Cinemographic Age.

Elena Day (with Derek Goldman and Joseph Megel) provided the direction. The show’s physicality is clearer and stronger than Tramp’s overall intent.

Projection design was by Ian McClain. His work transforming Jansen into Chaplin was charming indeed.

To be sure, some of the issues with Tramp’s New World are technical and due to opening night jitters. Hard to read text, interacting with an imaginary audience not the real one–to name a few–will disappear as the show moves forward.

Jansen will find more and more strength in the audiences he encounters. For it is in those fresh, nightly interactions that Tramp lives most forcefully and beautifully.

We might not worry about the bomb anymore. (Yes, of course, those frisky Iranians might acquire one.) Fortunately, the vitality of Tramp’s New World lives on.

Within Agee and Jansen’s performance-piece lies an even more sinister threat: science and technology can dehumanize us all.

Poet Saint John Perse in his Nobel Prize acceptance speech said: “In these days of nuclear energy, can the earthenware lamp of the poet still suffice? – Yes, if its clay reminds us of our own.”

Tramp’s New World has that clay, even as it dons the clothes of Electronic Man, and in a world with an apocalyptic future, a forceful beauty fashioned from a human clay is more than enough to live for.

Tramp’s New World plays through May 24, 2015 at The Mead Theatre Lab at Flashpoint – 916 G Street NW, in Washington DC. For tickets, purchase them at the door 30 minutes before the performance begins, or online.