Next Day Theater: Hitting Like a Truck on May 16th

For years, I’ve been thinking, man, I’ve got to get into this theater scene in DC. Then it hit me: 24 hour theater. That’s right, 1,440 minutes to memorize lines, block, rehearse, run tech, and then finally stage a series of short plays for a live audience. Brilliant.

And then I realized it’s been done. In fact, I had done it myself over a decade ago in Philadelphia. Doh. Stupid memory.

So when Next Day Theater, the latest DC iteration in day-old theater, arrives at Tropicalia on May 16th, it won’t exactly be an earth-shattering development in the history of the medium. Yes, the five plays – which run 10-15 minutes each – have never been produced. Yes, the directors and actors won’t see the plays until 24 hours before showtime. Yes, I will be shelling out a boatload for pizza during tech rehearsal.

But Next Day Theater will have one twist on the day-old play status quo: all of the plays are required to be laugh-your-ass-off, pee-in-your-pants, insert scatological cliché here, funny. [NOTE: in case they are not, we have excavated an underground tunnel beneath Tropicalia by which we will escape minutes after the show.]

I spent years – months, even – recruiting rising comedic talent from the DC theater scene, and brought on board four playwrights – plus yours truly – that I know have the chops to deliver the funny stuff. Then we coerced five directors with reams of experience to bring those comic visions to fruition. [I have to pause for a moment to insert a spoiler alert here and boast of how I landed the supremely gifted Chris Griffin – of the alas-no-longer Cherry Red Productions, one of my theatrical inspirations – to the directing team.]

Finally, I sent out calls to various theater and acting orgs and online communities around the area, and built a team of some 25 actors with resumes that blew me away. One of them is a certified paranormal investigator. Really. Another lists among their talents archery. So I would advise ghosts and other echtoplasmic organisms to avoid this show, and also recommend that audiences refrain from wearing shirts with bullseyes on them.

I would also be remiss – and perhaps end up with a well-deserved black eye — if I didn’t mention that my girlfriend, the lovely Amori Langstaff, has been providing invaluable support on marketing and promotion of the venture.

Okay, this is starting to sound a bit like an award acceptance speech. Back to that whole vision thing.

In addition to the usual plays/directors/actors stuff, we are also going to be monkeying with the theater festival format a bit. To say much more would like giving away that Han Solo and Chewbacca have cameos in the new Star Wars movie. Oops. But suffice to say there will be a bit of improv, as well as a monologue by New York Times bestselling author – and Speakeasy DC star – Sam Kean. Also, DC mixmaster DJ Kelz will be spinning all your favorite – and maybe most hated – tracks during a pre-show reception and post-show party.

And, assuming that we don’t totally bomb, we will be looking to experiment further with the format in future shows. I’m thinking Monty Python with a dash of 30 Rock and Dave Chappelle thrown in. More improv, more spoken word, maybe opera, kabuki, mimes, clowns, snake charmers, trapeze artists – you name it, and we’re not afraid to do it.

Okay, have I hit my word count limit yet? Yay! Anyways, hope you can make it out on the 16th, as it’s going to be a blast. 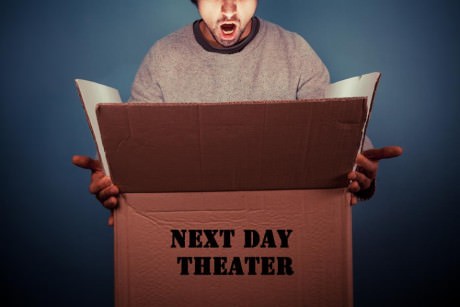