If you absolutely adored the movie Dirty Dancing and wouldn’t change a thing about it, Baltimore’s Hippodrome Theatre has just the show for you. Dirty Dancing — The Classic Story on Stage is easily the most literal-minded film adaptation ever put to stage. For millions of fans, that will be a good thing.

Eleanor Bergstein doesn’t just use her original screenplay from the 1987 movie as a guide for the play, she uses it as a blueprint. And Director James Powell clearly got the memo about not touching even a curl on Baby’s head.

So be ready for a lot of rear projection that mimics the flow of scene changes in the movie. That’s how we know the characters are outside balancing on a log, for instance, or practicing dance lifts in the lake, or driving home from a performance beneath the starry, starry sky. Slides inform us of the day of the week, and at one point there is even a faux close-up of a shattering window when Johnny is forced to break into his locked car.

The dialogue is all here, every word of it, though that creates some problems in focus that the movie never had. When the stage is full of Catskill vacationers waiting for their mambo instructor, it can be a challenge just making out who in the crowd is doing all the jabbering.

The “classic story” is the one about that summer in 1963 before JFK was shot, when idealism was in full flower and only the most cynical sneezed. That’s when Dr. Houseman (Mark Elliot Wilson) brings his wife and two teenaged daughters to Kellerman’s upstate New York resort for a little R&R.

In youngest daughter Baby’s view, R&R could translate more as romance and randiness. Those flames are fanned when she stumbles upon the exciting new rhythms and off-hours dance moves of the resort staff, especially its buff dance captain, Johnny Castle (Samuel Pergande).

As in the film, most of the music derives from contemporary records, and the rest are moldy oldies played by the resort’s resident dance band. Unlike other musicals, the leads do little if any of the singing themselves, so the overlay of songs do more to punctuate the settings and the nostalgia than to say much about the characters.

On notable extra not in the film is a night scene in which guests and staff snuggle around a campfire and segue from “This Land Is Your Land” to “We Shall Overcome” and other anthems of the civil rights era. A few added lines of dialogue acknowledge the seeds of protest and social unrest that would become a game-changer in the years ahead.

Happily, when anything threatens to become serious, one can always look forward to the next dance number. The program credits the “original choreography” to Kate Champion, though in Baltimore Choreographer Michelle Lynch has found plenty of fresh young dance talent for her ensemble.

Besides the flashy gyrotechnics of Pergande, Jenny Winton adds male eye-appeal as Penny, the lithe and sexy dance partner whose unexpected pregnancy paves the way for Baby to realize her own potential under Johnny’s private tutelage.

This 30-city touring production of Dirty Dancing leaves Baby’s first introduction to the underground culture of the dance staff with oodles of untapped potential. An opportunity for a wild Act One showstopper unfolds as little more than an impromptu dance party with a few de rigueur hip grinds (admittedly still pretty shocking in 1963).

Baby’s later command performance with Johnny is more exposition than exhibition. It emphasizes how ill prepared she is to perform for an audience rather than how game and admirable she is for going through with it on such short notice.

Indeed, the whole of Dirty Dancing on stage seems to be little more than extended foreplay for what the whole audience is really there to see — the big blowout “(I’ve Had) The Time of My Life” dance climax. Happily, it is worth the wait, and probably the cost of the tickets, as the stage erupts in movement, rhythm, and blinding kilowatts of electricity.

The movie’s famous breakout quote by Johnny, “Nobody puts Baby in the corner,” roused the Baltimore audience to its loudest display of approval all evening. A big part of the respect that Johnny has come to feel for this Baby was wholeheartedly shared by playgoers. Gillian Abbott starts out a gawky and coltish would-be princess, but transforms in true fairy-tale fashion into a dancing queen worthy of our embrace.

Running Time: About two hours and 15 minutes, with one 20-minute intermission. 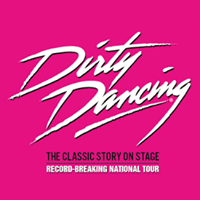 Dirty Dancing — The Classic Story on Stage plays through May 24, 2015 at The Hippodrome Theatre at The France-Merrick Performing Arts Center – 12 North Eutaw Street, in Baltimore, MD. For tickets, call (800) 982-ARTS, or purchase them online.