This Double Feature Production of two One-Act Plays is presented by The Greenspring Players for their Washington DC community Spring offering. Although P is for Perfect may be considered a hyped-up April Fools joke gone awry, Man of the House shines a light on the possible scenario as to what might happen to your house after leaving for vacation. One might walk away from the evening’s theatrical antics giving considerable thought that these far-fetched farces may be much closer to reality than fantasy. 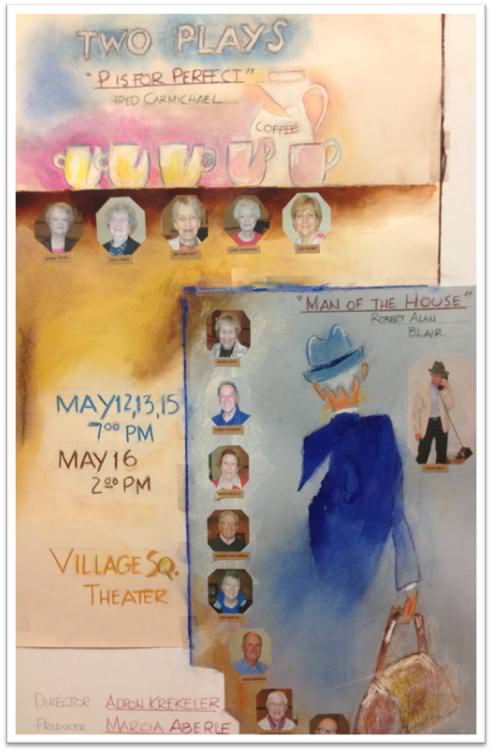 P is for Perfect opens in the living room of one of the executives of a top notch technology firm. The wives of three of the executives Mary, Millicent and Violet attempt to figure out ways to entertain each other. Each one is charged with creating the surprise each month and then using their special creation to continually attempt to outdo each other.

Today, it is Mary’s turn to be the host and in cahoots with two members of her husband’s firm, Cora and Miss Pex, they undertake together the challenge to pull off the most magnificent surprise that could ever be fabricated. Miss Pex about halfway into the play is identified as a robot or as she tells the audience constantly throughout the evening, “P stands for Perfect and EX stands for experimental,” hence is Miss Pex – the perfect women? Quips from our robot producing laugh-out-loud results include answers to questions: “Do you need anything? No, I was oiled and greased yesterday. Where are you from?  Here and There.” Cora, Miss Pex’s handler, has the capability to control her through an automated equipment master box.

The resulting diatribes on stage provide some fascinating entertainment as to what makes these executive wives emotionally tick. As the play evolves, these friends for life empty their personal war chests with remarks and snippets about each other as well as their husbands. The twist at the end turns out to be not just solely one, but a multiple twist that leaves the audience not only laughing but re-questioning as to what they just experienced. Sue Franke deserves high marks in her role as the robot, convincing the audience they are seeing a perspective on their technological future right here in Springfield, VA

Man of the House opens with a call from Ms. Mason to the local police letting them know she will be leaving and asks that her house be given special surveillance while she is out-of-town. What we as the audience observe is that there is an intruder in the house ready to steal its valuables as soon as Ms. Mason leaves.

As one might suspect, the simple heist by our burglar goes awry when the phone begins ringing and visitors begin knocking on the door of the Mason residence mistaking the burglar for its owner. The laughs increase in frequency as the Mason relatives interrupt our safecrackers’ attempts to ransack the valuables within. To the burglar’s surprise, he soon finds himself in the middle of family squabbles, while simultaneously playing the role of therapist and marriage counselor to the entire cast, including the police detective.

John Carle deserves special mention in his role as the burglar. The play relies heavily on him since he seldom leaves the stage. Elke Martin, (see interview at end of review), plays a pivotal role as the mother of Mr. Mason’s niece. The terrific script was filled with great one liners: the mother says, “Why don’t you put on some lights?” and the safecracker responds, “I do my best work in the dark.”

Guest director Adron Krekeler directs both plays and has done a super job in not only selecting great actors/actresses to take on the various roles, but creating a team that assists him in bringing a realism to both productions. He also does double-duty by playing a minor role in Man of the House.

The set design by Verna Finly is quite a huge accomplishment and a number of individuals deserve kudos for carrying it out. Mal Searle and Lou Jones are involved with set construction while Bob Madison and Roy Kepferle are charged with stage crew responsibilities.

Eloise Stinger, Gwen Lockhart, and Claire Grande are the stage dressers—finding the appropriate furniture and decor to enhance the stage  Together, this team successfully carries out its responsibilities by its creation of a contemporary living room, with a breakfront topped with overflowing green leaves, two doors on either side of the stage and one in the middle that actors utilize to do “battle” with each other.

Pictures hang on the walls throughout the set with two high-backed chairs covered in white, a love seat with a coffee table in front of it, which is surrounded by additional chairs in the center where most of the action takes place. The set serves double duty, after being moved around with additional  accoutrements in the second play, providing an entirely different perspective, without the feeling of duplicity.

Other important members of the production team charged with wardrobe responsibilities are Micheline Shipley and Ray Magliozzi. The colorful costumes in both plays help the audience make the connection to an appropriate era and individual class with special recognition of Miss Pex’s red costume and red hair in the first play.

I interviewed one of the performers from the second show, Man of the House, Elke Martin, who played the role of the mother.

Eric: How many plays have you performed here at Greenspring?

This is my second play at Greenspring; in 2013 I performed here in When Shakespeare Slept. When I was a kid between 14-20, I got the ‘theater bug.’ It just took awhile to realize how important acting is to me, especially since I am now considering retirement.

I am sure you have many responsibilities during the day. Do you consider your Greenspring performances an obligation, or do you really enjoy it?

I wouldn’t be doing these performances if I didn’t enjoy it. When doing both “jobs,” it is a juggling act to work and rehearse back to back because of my already long days extending into evenings.

How did you get the part?

I read over the plays and I really wanted to play the part that I was selected for. I was encouraged to audition as a staff member.

Do you have a particular role you would like to audition for?

That’s an interesting question. The role that I play is of a pious, conservative, religious individual who is very judgmental. The role is a twist as to how I view myself. In my own perspective, it makes my role-playing that more challenging since it is not how I view myself. Yet, it is personally rewarding since I have been told I am very convincing in the role.

How do you go about remembering your lines?

Funny, you should ask that. I have about 70 lines. Thankfully, I have a gift for remembering. I read over the script many times. To a degree, I depend on my fellow performers as cues from their lines and gestures, but I also intently focus on my lines and their integration in the script. It’s a skillset that actors utilize as a tool to their advantage.

You stated earlier that retirement is on the horizon. Will you set aside some of your available time to audition for additional theater roles?

I am comfortable performing here at Greenspring, and I intend to audition for future roles with this community.