As Memorial Day weekend approaches, we prepare for barbecues and trips to the beach, but some of us forget about the true reason for the three-day weekend: acknowledging the accomplishments of those who have served our country. In his bio for the Last of the Boys program, Director Barry Feinstein commends Fells Point Corner Theatre for agreeing to put on this show, as it is, in his words, a “very powerful and insightful play concerning one of the world’s greatest problems, remembrance.” Last of the Boys is indeed a remarkable and profound reminder of how much war has impacted (and continues to impact) our lives.

A finalist for the American Theatre Critics Association’s Steinberg New Play Award, Stephen Dietz’s Last of the Boys focuses on those affected by the war in Vietnam: the soldiers, and the widows and children who were left behind. The Fells Point Corner Theatre sets the mood for the play by displaying photographs from the Vietnam War in their lobby and by playing music from that era, including memorable tunes such as “Time Has Come Today” by The Chambers Brothers and “He Ain’t Heavy, He’s My Brother” by The Hollies.

In a trailer park in the summer of 1999, more than 30 years after the United States first entered the Vietnam War, two former Army buddies, Jeeter (Tony Colavito) and Ben (Mark Squirek) are catching up after Ben’s father’s funeral, a ceremony that Jeeter attended with his lady friend Salyer (Casey Dutt), but Ben did not. While they seem to be calmly (if not slightly tensely) reuniting over shared beer and marijuana, the pain from their experience during the war is brewing under the surface.

As much as the two try to suppress the demons from their past, each man’s torment manifests itself in a different way. Since he could not control what happened during the war, Jeeter tries to control the band The Rolling Stones by attending each of their concerts with a sign, urging them to “Just Stop.”  Ben’s PTSD rears its ugly head in a very different way, as he occasionally takes on the role of former Secretary of Defense Robert McNamara and holds imaginary press conferences. The introduction of Salyer and her mother Lorraine (Katherine Lyons) into their lives only exacerbates their pain and causes them to admit to some truths that had lain dormant for quite some time.

Director Feinstein made excellent choices in his casting for Jeeter and Ben. Colavito’s portrayal of Jeeter is reminiscent of Al Pacino in Scent of a Woman. He is passionate and dynamic, while at the same time, he is gritty and down to earth. Even though the script is very heavy, Colavito deliver Jeeter’s few humorous lines (i.e. describing Michigan as a “state shaped like a sad man’s head”) very smoothly.

Squirek’s Ben is both heartbreaking and haunting. At times, Squirek portrays Ben as someone who is perpetually scared of his past, but at other times, he is pulling at his hair, a powder keg ready to burst. The chemistry between the two actors is genuine, making the audience feel as though the two share a true friendship.

Casey Dutt is electric as the outspoken Salyer, a woman whose father has been M.I.A. since before her birth. Katherine Lyons is the perfect mix of tough and fragile in her portrayal of Lorraine, a woman still mourning her husband by making him a cup of coffee each morning. Handsome Adam C. Zoellner is every bit the Young Soldier, straightforward and professional in Ben’s Robert McNamara fantasy scenes. Despite sharing the stage with larger than life characters like Ben and Jeeter, the talents of these actors allow them to shine every moment that they are onstage.

In addition to making superb casting choices, Director Barry Feinstein’s staging is meticulous and deliberate, making every scene feel raw and true. Set Designer Bush Greenbeck’s trailer park is the perfect fit for Ben’s solitary life. Much of the furniture, including a bench and washtub stand, are put together with sawhorses and cement blocks, which could be a metaphor for how Ben is trying to put his life back together (block by block) after the war. 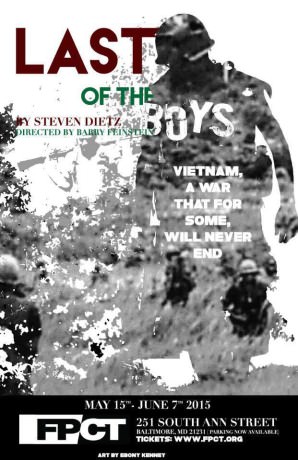 Lighting Designer Charles W. Danforth III creates an eerie mood by adding blue tints to the lights whenever Ben escapes into a McNamara fantasy.  The only drawback to the performance was the sound system, which created a buzzing during the first part of the show and skipped music in the second half.

Bertrand Russell once said, “War does not determine who is right–only who is left.”  Last of the Boys truly allows the audience to empathize with those who are “left.”

Last of the Boys runs through June 7, 2015 at the Fells Point Corner Theatre – 251 South Ann Street, in Baltimore, Maryland. For tickets, purchase them online.

Note: Military sounds and a fog machine are used during the performance