For one night only, the State Theatre will host a cavalcade of talent unlike anything you’re likely to have seen before. The cast, full of seasoned pros in the weirdness, comedy and variety business have all received their fair share of the spotlight, having been featured on the The Late Show with David Letterman, the Tonight Show, HBO, MTV, and more. Comprised of a comedian, contortionist, juggler/yo-yo-er, circus-sideshow duo and a one-man band, an assemblage such as this is guaranteed to amaze and amuse. 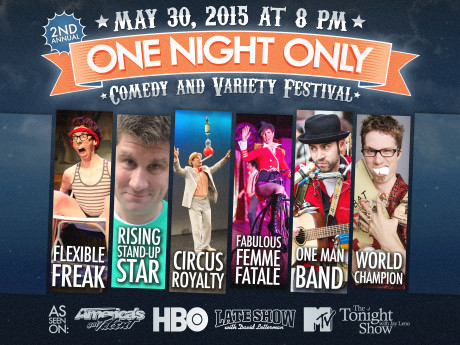 Alex: Jonathan and Mark, The One Night Only Comedy & Variety Festival is a shared brainchild of yours. How did this project come about?

Jonathan Burns: Brainchild?! Well, you see… when two brains love each other very much they give each other a special hug… Wait? What was the question?

Mark Hayward: It’s a rare treat for me to have co-workers. As a variety artist I spend most of my time alone: working in my office, travelling to and from gigs, etc. Another rare treat is to get to perform in a theater or other public performance space, I’m usually hired for private events. When Jonathan and I started talking about organizing some sort of festival or show with other entertainers, it was obvious that we should try to combine those two elements. Also, variety shows can be incredible. Having so much high-level talent in one place allows for a show that is greater than the sum of its parts.

What are audiences in for from the current lineup of this series?  Any helpful tips for those preparing to attend (i.e. Is there a splash zone and if so, should they bring umbrellas?)?

Jonathan: Splash Zone?! Not this year, but I’m now adding that to the ideas list for next year! Come prepared for thrills, chills, and maybe wear an adult diaper. We hope you see feats & stunts you’ve never seen before and laugh your booty off!

Mark: Haha!! No one needs to worry about a splash zone. The main thing that audiences are in for is an incredible show that is unlike anything they’ve ever seen before. We have a show filled with rare talent that most Americans don’t ever get to see. My advice would be to come prepared to laugh, and have a great time. Also, we will have a merchandise table if you’re in to that kind of thing.

Jonathan, you recently attempted to set a Guinness World Record for contorting and passing your body through a toilet seat an impressive number of times. How does one emotionally prepare for such a feat? What kinds of things run through your head, mid accomplishment?

Jonathan: I know physically I was blessed with this amazing body, but emotionally I try to cut out the pressure from the outside world by listening to “The Final Countdown” by Europe on repeat to get in “the zone!” My last attempt was for “The Most Times To Pass Through A Toilet Seat In One Minute.” The current record was held by a man in Turkey at 9 passes, but last week during our tour I beat the record with 10 passes! I did it to prove to myself that I could and I did it for America. In the song they sing “Will things ever be the same again?,” and now that I know I’m the fastest toilet seat contortionist I know things WILL never be the same again.

During the attempts I usually try to focus on the task at hand or about classic episodes of Full House. I’m planning on breaking another record at the Falls Church show on May 30th which will also include a toilet seat and my slender, yet sexy, body!

Mark – Cosmopolitan recently featured an article about clowns being the new hotness. As juggling is logically on target to be the next en vogue thing, I imagine you are but one ball in the air/yo-yo away from the cover of GQ. Tell me, how will you handle the Clooney-esque level of fame and fortune that will surely accompany that accomplishment?

Mark: It would certainly take some time to adjust to being the first-ever famous juggler/yo-yoer. It has always been a dream of mine to get on the cover of a magazine, and now that Juggle Magazine is gone, I guess [GQ] will have to do. I would try to use my powers only for good, but I would not miss the chance to throw a couple of good pranks out there. Look out America’s Funniest Home Videos, ’cause here I come!

Nick – as a one man band, you literally march to the beat of your own drum and as such, are a self-contained super-group of all sorts of sounds. Since most bands boasting additional members tend to have interpersonal conflicts (sometimes very publicly) what would an argument within your one man band look like? For instance, have you left any hotel rooms dramatically trashed in your wake due to an internal conflict between your guitarist and drummer?

Nick DiSanto: In response to your question, a one-man band is subject to the same interpersonal and creative conflicts that occur in other bands. The drummer, like most drummers, is rather bumptious and heavy-handed, always playing too loudly and rushing the beat. The guitarist, when not botching the chords, is usually sulking over the fact that the harmonica and kazoo get to take all the solos. He feels overshadowed by the singer and struggles to keep time with his ham-fisted drummer. The singer is something of a prima donna. He demands the most rest, constantly asks for lemon water, and always blames the guitarist if a note sounds sour. Since it’s impossible for my brain to focus on all these egos at once, all I can do is check in with each musician every few seconds and hope none of them are embarrassing me too much. In the end, they have to work out their differences because they’re not talented enough to pursue solo careers.

Keith – As Kinko the Clown you ran a fairly notorious campaign as a write-in candidate for President of the United States both in 2008 and 2012.  Your campaign boasted strong environmental views such as the proposal of running vehicles on “the power of laughter and farts.” What success did you experience with the furtherance of these proposals and with your campaign, overall? Any plans to run for office in 2016?

Keith Nelson: Kinko is yet to cede either the 2008 or the 2012 elections. Realizing that most states do not count write-in ballots, Kinko the Clown continues to stress that the electoral process is neither fair nor democratic until every vote is of equal count. Kinko realizes that society continues to overlook the power of laughter and farts. We may be only one or two finger pulls away from a greener world. The past seven years are filled with moments that Kinko, a silent clown, could easily tell those sitting in power, “I told you so.” As for 2016, Kinko is taking a break from national politics and the toxic town of DC, to get back to the clown basics, to spread his wisdom on a more grass roots level, and to focus on making the grand spectacle with Bindlestiff Family Cirkus. Though, if enough people write-in Kinko, he will gladly move to the White House and make some major changes.

Stephanie – In the Bindlestiffs’ documentary series, there is an episode where you take on a gig with Una Mimnagh’s Motorcycle Thrill Show.  In this episode, you are driving a motorcycle on a high wire, continuously alternating between being right side up and upside down, with Una precariously balanced on a metal contraption beneath you. When I saw this, my first thought was “She is a real life [Harvey Comics] Black Cat!” So tell me, what is it like to be a bonafide super-heroine? What other superpowers beyond your general bad-assery do you possess and do you have your own secret lair?

Stephanie Monseu: Thank you for the flattering comparison to Black Cat. I have a great flair for looking like a bad-ass on the outside. I actually have a creamy marshmallow center. My lair is portable. It is a pair of lo-profile running shoes that do more to protect my soul than sole.

Chip – I recently read a text conversation published in PhillyMag between yourself and comedian Jim Grammond in which you are the perpetrator of some fairly ingenious/ horrendous puns. I, myself, am not skilled in the art form of pun-creation (and it IS an art form), so if you could indulge me, please describe your act/ this show in a few short puns.

Chip Chantry: There are many ways to describe this show and my act. I can’t do it right now though, because I’m in a hurry to catch a flight. But once we land, I’ll ‘ex-plane.’

[Note: All the pictures were supplied by the artists.]