What does a jazz lover expect from a concert of one of the world’s greatest jazz stars? To be moved by the magic of jazz and loving its sound? This was my exact experience last night, when the stage was taken by ‘the jazz fusion’ storm of Michal Urbaniak and his band Urbanator, as part of their “Back in the USA” tour.

Michal Urbaniak’s long musical journey has produced distinctly unique sounds and generated many original projects. In Fusion the composer, arranger, violinist, and saxophonist blended “melodic and rhythmic elements of Polish folk music into funky New York-based music”; in Urbanator he fused rap and hip-hop in jazz. The Urbanizer was a recording with an R&B vocal group, whilst UrbSymphony resulted from a recording of the jazz group with a rapper and a computer playing 60-piece full symphony orchestra. 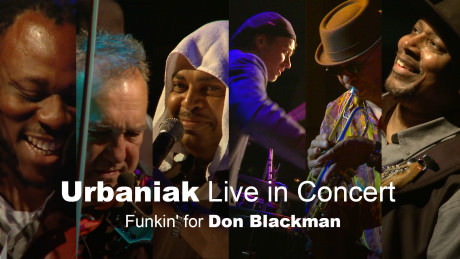 Each of the amazingly talented musicians had plenty of chances to showcase their mastery, with Urbaniak’s soul-stirring trademark violin leading the way. Yayoi Ikawa was brewing up a storm after storm on the piano and electric keyboards, especially in the Polish themed pieces; the drums were tested to the limits by Mike Flythe in a number of dynamic solos. The guitar and bass were always there; the brilliant lead was unforgettable and especially cheeky in its ’conversation’ with Urbaniak’s  violin in the Girl Talk; the excellent bass effortlessly threading its vital deep sound throughout the night, having its well-deserved shining moment in a solo towards the end of the concert.

Urbaniak, who became a world famous jazz star after he recorded the “TUTU” album with the biggest – Miles Davis, hails from Poland, where jazz has been loved and played since 1930s, repressed during Stalinist regime yet enjoyed underground as the expression of the nation’s love of freedom. The musician, who “was playing the classical violin form a young age and playing with symphony orchestras by age 9,” started his American adventure as a teenager in 1962.  He went on tour with the Polish band The Wreckers, playing in festivals and clubs in Newport, San Francisco, Chicago, Washington, DC, and New York City.

His first band Michal Urbaniak Group formed in late 1960s with Urszula Dudziak and Wojciech Karolak was the beginning of the famous Michal Urbaniak fusion. After recording their first albums, the group played overseas, which led to Urbaniak being awarded the Grand Prix for the best soloist at the 1971 Montreux festival, and was awarded a scholarship by the prestigious Berklee College of Music in Boston. Contract with Columbia Records followed, Urbaniak moved from Poland to New York City in 1973, and the rest is history!

“Michal Urbaniak has performed several times at Carnegie Hall and at many famous world and NY jazz clubs like Blue Note, Village Vanguard, and Sweet Basil. He has received awards, has been a winner of numerous foreign plebiscites and in 1992 his name appeared in first place in the prestigious “Down Beat” jazz magazine in 5 categories among the biggest jazz stars. He has recorded over 60 albums. Many times he has received and given many invitations to co-perform with such famous jazz masters like: Quincy Jones, Billy Cobham, Stephane Grappelli, Joe Zawinul, Herbie Hancock, Wayne Shorter, Kenny Garrett, George Benson,” and many others.

“The band is smoking and audience devotedand imaginative, so we all should be having a ball!” Urbaniak wrote on his Facebook page prior to commencing the “Back to the USA” tour. The confidence coming from a jazz legend was, as expected, prophetic. The band was smoking and his devoted fans all had an absolute ball! If you love modern jazz at its best and original, do not miss Michal Urbaniak and Urbanator playing in New York on May 26, 2015 in Club DROM