When you go to one-night-only theater, you never know what you’ll get. There’s no word of mouth, no buzz, no yelping from critics. It’s like speed blind-dating

And if the one-night-stand in question, Next Day Theater, is brand-new to the DC theater landscape—its cheeky promo calls the popup a world premiere—that ups the ante-cipation.

I checked out Next Day Theater with another DCMetro TheaterArts writer, Michael Poandl. We made our way downstairs at Tropicalia on U Street where just past the bar there’s a small stage. In no time the place was packed with an audience ready to have a drink and a good time. Doing theater where people imbibe seems to have become a trend in DC—Drunkle Vanya and Murder Ballad come to mind. The libation-abetted levity offered by Next Day Theater was so au courant it didn’t exist 24 hours earlier. The sketch-comedy scripts had been written in advance, but the actors and directors got to see them only after work the day before.

Michael and I both enjoyed the show and agreed it would be a terrific fixture of DC’s performing-arts nightlife.

To convey the fast-paced, on-the-fly invention we saw onstage, I asked Next Day Theater’s impresario, Executive Producer Matt Spangler, to breeze through the show with me—like chitchat on a DVD extra.

John: The show began with a couple of actors  bantering downstage left. I couldn’t tell if they were improvising or had been scripted, but it was very, very funny.

Matt: They were improvising. That was my idea. I hashed it out over some beers with a friend of mine who does improv one night. She recommended Erik. Then I found Lena through one of the other actors in the production. And the three of us came up with this scenario where they were starting the show.

I can’t believe they hadn’t worked together before.

I don’t think they ever knew each other.

They reminded me of the comedy team Mike Nichols and Elaine May.

They would love that comparison.

They were so good I wanted to see more of them.

Directed by Star Johnson. With Janel Dillard and James Nachbaur.

John: Stop Doing It! had a hilarious premise: a masseuse who can’t stop texting the Pope. And while she’s massaging she’s messaging—where did that come from?

Matt: Anne Marie wrote it as messaging, but the director came up with the idea of the massage.

That wasn’t in the script!?

No, the script was bare, like Samuel Beckett, just two characters on stage rapping with each other. Then at the end the director had the woman being massaged rising up with a Pope hat on.

John: The setup of Voyers was a group of tag artists in a corporate board-room setting. They’re interviewing applicants to join their team as taggers. And then one candidate comes in who’s a feeble-wobbly senior citizen and for her job audition she draws sex parts.

Matt: It sounds really funny when you describe the plot.

There was some fun-to-watch acting going on too.

Written and performed by Sam Kean.

John: Sam Kean, who in his real life wrote a scientific book about the Periodic Table of Elements, told a funny and true story about how when it was translated into Chinese it got a book cover that was erotica.

He comes from the SpeakeasyDC community?

Right. Amori Langstaff my girlfriend and I went to the Valentine’s Day Show of Speakeasy DC at the 9:30 Club, and Sam came on. A couple of Speakeasy actors really impressed us, so we went to their websites and messaged them to see if they’d be interested in doing this show. And I heard back from Sam.

John: Oh, Alaska. The host puts oddball callers on the air and there’s this penguin beside him who just squeaks. That one was probably the most obscure to me.

I’m not sure I get the guess-who connection myself. But I knew the penguin was going to get some laughs, and people like that kind of folksy Northern Exposure humor.

It’s a good example of a sketch that has pop culture references in it that not everybody’s going to get. I mean, Northern Exposure was a while ago. But pretty soon you’re on to the next sketch, and you don’t have to be in the know.

THE TASTE By Jessica Bylander.

John: The Taste is about an Olympics-style wine-tasting championship, and Carol Spring, who played the curmudgeonly coach, just knocked me and Michael out.

Matt:  Have you seen her before?

Nope. The sketch had a hilarious premise, but she just chewed up that story and—

She stole the show. Hopefully we’ll get her back before she goes on to be a huge star.

Yeah, please. I can see that Next Day Theater could be an entry point for a lot of up-and-coming people—

It also can function to showcase some star power. Like “Hey, folks, it’s random; you never know what you’re going to see. But you might see someone who’s really on their way.” I love that.

It’s utterly pretentious for me to compare ourselves to something like Saturday Night Live. But hey, maybe we’re an incubator for talent. I think Carol is going to be known on the scene. There’s no question about that. If she broke out a little bit through us, I’m flattered.

John: This last one was a send-up of the ease of gun purchase with a hilarious parade of customers who can get guns—an armless man, Charlton Heston dressed as Moses, a deer, a baby. It was probably the most barbed social satire in the piece. I know you wrote it, but I’m curious to know your thoughts generally going forward about the place of politically awake sketch comedy in your project.

Matt: I’d like to see more of it. I’m a fairly passionate person politically. And I’ve done some documentary work. But I think you sometimes can get your message across, if you have one, more forcefully with humor than you can with pounding on a podium, right? The gun movement, where the pro-gun advocates are these days, has reached heights of absurdity in some respects. I think that if you can show that, if that’s something you believe, on stage, and people see how silly it is, then maybe your message starts to get through a little bit. But my first goal with that piece was that I had in mind a Monty Python–type sketch—something like that famous Cheese Shop one, where you have somebody come in and try to order cheese, but they don’t have any. 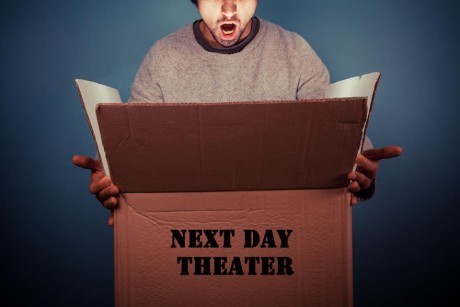 Next Day Theater performed May 16, 2015 at Tropicalia – 2001 14th Street, NW, in Washington, DC. For information about future Next Day Theater productions, “like” its Facebook page, or email Matt Spangler.

LINK:
Matt Spangler on Next Day Theater: “Like Hitting a Truck” on DCMetroTheaterArts.