As the weather turns sultry, Baltimore theater goers with an appreciation for irony should make it a point not to miss 2nd Star Productions current show, Kiss Me, Kate, the Tony Award-winning musical comedy, with music and lyrics by Cole Porter, and book by Samuel and Bella Spewack. Here the lives of the actors start to mirror the characters they play, which is set in a Baltimore theater circa 1947, during one scorcher of a heat-wave. But the weather outside is nothing compared to the boiling tempers and sizzling passion of the actors.

Egotistical actor-director-producer Fred Graham, played by Brian Binney, is mounting a musical version of  Shakespeares’ The Taming of the Shrew, and tonight is the soft opening in Baltimore. And if putting on the show wasn’t hard enough, Graham’s volatile ex-wife, Lilli Vanessi (Brenda D. Parker), is playing opposite him as the titular Kate. There’s a lot of history between them and it quickly becomes clear that things between them aren’t as over as either wants to admit. Meanwhile, Graham’s affair with another actress, Lois Lane (Amy Greco), leads to a disastrous mix-up which threatens to close the show before it’s finished even one performance.

The final ingredient in this recipe for disaster comes courtesy of Lois’ boyfriend and fellow actor, Bill Calhoun (Nathan Bowen), whose gambling habit has brought two gangsters to the theater. Played by Josh Hampton and Michael Iacone, these menacing men find themselves making their theatrical debut as they try to collect on a debt for their boss. Much like Shakespeare’s Petruchio must tame Katherine for the greater good, Graham has to find a way manage his ex-wife for the sake of the show and his life. The rest of the cast and crew get dragged along for the ride as problems make their way onstage for a most memorable opening night.

The cast of Kiss Me, Kate is sublime. Brian Binney and Brenda D. Parker are hilarious and heartfelt as they play two former lovers struggling to be honest with each other and themselves through egos, hurt feelings, and gangster threats of untimely death. Their stellar vocals are heard in their duet ‘Wunderbar’, Parker’s renditions of  “So in Love’ and “I Hate Men,”  and Binney’s “Were Thine That Special Face” and “Where is the Life That Late I Led?”

Amy Greco and Nathan Bowen are scene stealers as they portray the younger couple plagued with their own set of insecurities. Greco’s  renditions of “Why Can’t You Behave?” and “Always True to You in My Fashion” are both delivered with gusto, while Bowen’s beautiful voice is heard when he serenades his true love with “Bianca.”

Josh Hampton and Michael Iacone are over-the-top funny as gangsters, and their one number, “Brush Up Your Shakespeare,” had the audience in stitches.

Jared Shamberger and Aerika Saxe play Paul and Hattie respectively and they’re amazing; Shamberger’s solo in the Act 2 opening, “Too Darn Hot” is not to be missed.

Keith Brown as General Howell is only onstage for a few scenes, but they’re memorable as he plays the larger than life character.

The entire ensemble is brilliant. They sing, they dance, they act – and all of it with a sense that they’re having as much fun onstage as we’re having in our seats.

Roy Hammond directs this masterpiece of comedy and music, and is assisted by a fairly robust production crew.

Jane B. Wingard is producer, as well as set designer and front of house. Her sets look more like something you’d see in the Hippodrome than a community theater.

Joe Biddle is the music director and conductor and Rikki Howie Lacewell choreographed. Their work on the show speaks for itself in the cast’s amazing performances. 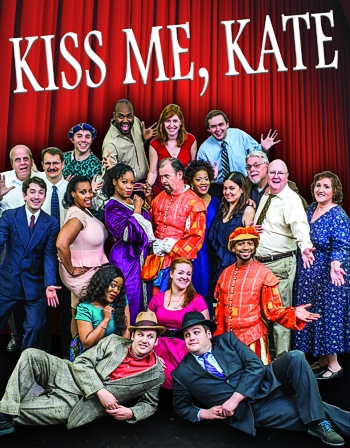 Linda Swann’s costumes are colorful and period appropriate for the 40s; the Shakespearean costumes are a little more Renaissance Faire garb, but it fits the mood of the fictional performance of The Taming of the Shrew. Joanne D. Wilson is stage manager and in charge of properties, and Garrett R. Hyde designed the sound and light.

2nd Star Productions has put on one heck of a show and local theater goers would be doing themselves a disservice if they didn’t check out this Kiss Me, Kate. It’s truly Wunderbar!