Raconteur. A word seldom used nowadays. In the era of Twitter and short attention spans, good luck finding “a person who excels in telling anecdotes.” But flip open the Merriam-Webster Dictionary to the word and don’t be surprised if Mark Nadler‘s headshot is the illustration. 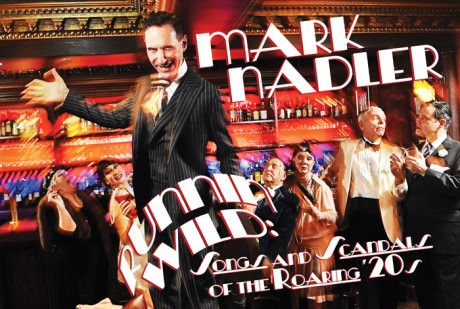 Nadler is fresh out of the recording studio, having curated a brilliant selection of songs epitomizing the 1920s. Interest in the period spiked around the turn of this century–most notably, perhaps, seen in the musical Ragtime and two musicals of The Wild Party, March’s 1928 raucous poem. Raucous poetry — that pretty much sums up the Roaring 20s and Mark Nadler. And how exciting that I was there to watch him launch his new CD of his new show Runnin’ Wild at the Strathmore’s new AMP.

Nadler arrived on stage handsome, dapper, and beaming with cheer and charm. Two delightfully wicked, lesser known songs bookend the evening, starting with Cole Porter’s “Let’s Misbehave” and closing with Irving Berlin’s “Pack Up Your Sins (And Go to the Devil).” His travelogue of the decade makes stops in New York, Hollywood, London, Berlin … Winston-Salem, North Carolina, and Waterloo, Iowa. Songs are anchored to both social history and folklore, to the famous and the notorious — Mae West, Clara Bow (Nadler makes it crystal clear that The IT Girl sobriquet had nothing to do with Information Technology), Cab Calloway, Aimee Semple McPherson, and other assorted denizens of Vaudeville and speakeasies.

Some of the finest moments showed Nadler’s genius for reinventing a familiar song as well as for grounding his interpretation in the era. His rendition of “Limehouse Blues” was stunning (little similarity to the Julie Andrews version heard in the 1968 Gertrude Lawrence biopic, I assure you). “Willie the Weeper/Minnie the Moocher,” “Body and Soul,” and a chilling “Die Moritat von Mackie Messer” (aka “Mack the Knife” from Weill and Brecht’s The Threepenny Opera) were also enthralling.

‘Triple threat’ doesn’t begin to do Nadler justice. It’s clear why he is an acclaimed musician, vocalist, humorist, dancer and actor. What’s more, he’s also a born storyteller and a damn good social historian. And I understand he’s also genius at making a martini that’s as dry as the Mojave.

LINK
A Chat with Mark Nadler on his Show Runnin’ Wild: Songs and Scandals of the Roaring ’20s ,This Friday, May 29th at 8 PM at Strathmore’s New AMP by Joel Markowitz on DCMetroTheaterArts.