Oh what a night – there’s a party goin’ on! Chaka Khan, Queen of Funk Soul,  and the funkedelic Kool and the Gang were a red-hot double-hitter that rocked a sold-out house and packed lawn in a concert as hot as Saturday’s clear summer night under the stars at the Filene Center of  the Wolf Trap National Park for the Performing Arts.

Old School R&B doesn’t get any funkier than 10-time Grammy Award winner Chaka Khan and Top Ten chart toppers, Kool & the Gang, who together rack up nearly a century of some the best party-hearty dance music and rocker ballads of all time. 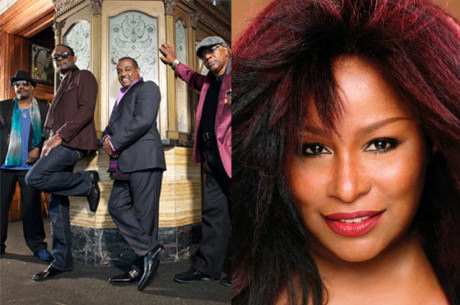 Emcee John Monds of Majic 102.3 FM  intro-ed Ms. Khan who was first to hit the stage. Entering to a standing ovation, Chaka set the electric mood for the evening with that high pitched wail that is as strong as when I first heard it many years ago. The lady can sing — but it certainly doesn’t give you blues. Chaka Khan has been on the music scene for almost 40 years but the quality of her stunning voice has not changed one bit. She still has the kind of pipes that go right through you with joyful excitement, creating an irresistible urge to rise to your feet in your own personal boogey-down sing-along. Too bad if the guys sitting behind you can’t see because they might as well just get on up, too. This audience came to have a good time!

Kicking off with “I Feel for You,” Grammy’s 1985 Best R&B Song written by Prince, had that blaring, pulsating beat that Chaka Khan is famous for. “Never Miss the Water” was heavy on drums with a lively up tempo disco sound. “What You Gonna Do for Me’ was more mellow giving us time to catch our breath from her powerful vocals and full-stop vocal back up trio and sometimes-too-loud but still terrific musicians leading into “Papillon aka Hot Butterfly,” another smooth  groove.

Singing a round of “heart to heart” ballads, this part of the show was a softer ode to love. Chaka Khan is also a talented songwriter and her “Through the Fire” a beautiful, timeless ballad with music and lyrics that she wrote herself, was one of my favorites. She sang it with soulful passion as if for the very first time I could see a sea of waving hands and lip-synched fervor from fans who were not only the expected Baby boomers but also the younger ones who have discovered the power and the energy of Chaka Khan.

“Love Me Still,” also written by Ms. Khan, was a deeply touching, quiet ballad sung with only keyboard accompaniment. “Angel” brought us to what felt like a spiritual high with Chaka’s inspirational message that we are all “points of light.”

The lyrics to “Angel”, written by Chaka Khan, opened us to her to her personal space, life and times:

There were so many more special moments both soft and sonorous, husky and hushed that were testament to the multi-faceted, gifted talents of this Superstar songstress. Classics like “Everlasting Love,” “Sweet Thing,” “My Funny Valentine,” “Tell Me Something Good,” and the triumphant “I’m Every Woman” that had every woman in the audience in a frenzied high, brought the house down.

Ending with one of her best loved songs that we had all been waiting for, from back in the day when she sang with Rufus, “Ain’t Nobody” was a rousing finale and another standing ovation for the divine Ms. Khan.

She came, she sang, she conquered.

The energy, the power, the talent and the chops were right on time with Chaka Khan’s follow-up act, nimble funk pioneers, Kool & the Gang. Granted, Chaka is a hard act to follow but The Gang was definitely up to the challenge. Since 1964, Kool & the Gang have been entertaining audiences around the world. And though  several original members have passed on, Robert “Kool” Bell is still playing bass, his brother Ronald Bell is still jazzing on  tenor sax, and Dennis “Dee Tee” Thomas is still blowing us away on alto sax with George Brown on drums. Longtime members also include vocalists Larry Gittens and Spike Mickens, with Curtis Williams on keyboard and trumpeter Michael Ray.

The group started out in the 60s doing jazz but branched out to soul, funk, and disco. Today, 12-member Kool & the Gang are consummate entertainers, showmen, and top flight musicians who are as popular as ever. One crowd pleaser after another, Kool & the Gang presented a dynamite show of funky dance tunes and soulful ballads. It’s amazing to realize that everybody knows the words to Kool & the Gang songs. And sing along, we did. Once Kool & the Gang lit up the stage with “Fresh” the music never stopped. The heavy beat of old time favorites, “Party People” and “Ladies Night” were forever fresh and The Gang’s synchronized dance moves put us in the mood to join in, with folks dancing in their seats and wildly waving their hands high in the air.

Joanna” was another of those easily recognizable Kool & the Gang hits and mellow love song that made me feel they were singing it just for me even though my name is not Joanna! Wolf Trap transformed into a huge dance floor with “Too Hot” with Ronald Bell’s sizzling tenor sax solo. We were on our feet more than in our seats for this concert and dance favorites “Funky Stuff,” “Jungle Boogie,” “Get Down On It,” “Hollywood Swingin”’ gave us exactly what we wanted to hear as Kool & the Gang performed all of their best known recordings. “Summer Madness” reminded me of the new smash hits “Kool & the Gang” would come out with every summer. Their songs are time markers that made you remember where you were and who you were with, way back when. Nostalgia mingles with “Tonight’s the Night” delight at a Kool & the Gang concert.

Mixing the tempo with a mellower mood, “Cherish” literally lit up the night when the audience was asked to take out their smartphones so their glow could become points of light. There was a sea of sparkles as we basked in the sweet sounds of this favorite love ballad. Kool & the Gang’s non-stop party finally came to an end with get-happy “Celebration.” These guys just keep getting better.

What a fun evening. It was the experience of a lifetime to see and to hear the iconic Kool & the Gang and Ms. Chaka Khan, a dynamic combo who blasted off the hot-fun-in-the-summertime lineup at the Filene Center of the Wolf Trap National Park for the Performing Arts.