Ben Cook is returning home and will be dancing his heart out in Newsies at The National Theatre. I had a chance to catch up with Ben. 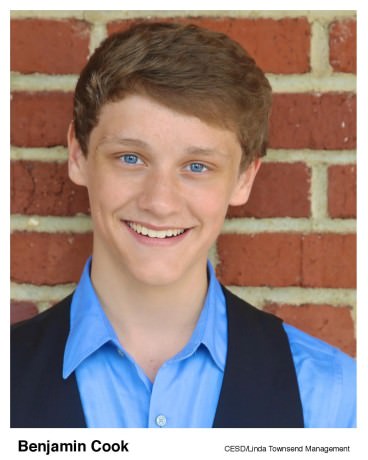 Joel: Please introduce yourself to our readers and tell them where they may have seen you on DC area stages, on Broadway, or on ‘the road.’

Ben: My name is Ben Cook, and I am 17 years old. My family and I moved from North Carolina to Virginia when I was 3, and I started taking dance lessons at Metropolitan Fine Arts Center (now Metropolitan School of the Arts) when I was 7. Melissa Dobbs, who runs MSA, said that I had talent and urged me to get a manager/agent, so I auditioned for and signed with Linda Townsend, and she started sending me out on professional auditions.

When I was 9, I booked my first professional role as Tiny Tim in Ford’s Theatre’s A Christmas Carol. From there I performed in Macbeth at the Folger Shakespeare Theatre, at Ford’s the next year in A Christmas Carol and The Heavens Are Hung in Black. I was the understudy to Little Boy when Ragtime was at The Kennedy Center and then moved to New York when the show transferred to Broadway. My first performance in Ragtime was on the Broadway stage.

After Ragtime closed, I played the Page in Terrence McNally’s Golden Age at The Kennedy Center, then I booked Billy Elliot in New York. I was in the ensemble and understudied Michael on Broadway, then went on tour as Michael and, finally, as Billy.

I’ve also been on episodes of three TV series — 30 Rock in a flashback as Young Jack; as Mike’s stepson on an episode of Veep and as Dunbar’s son in House of Cards.

When your Dad Glenn Cook was writing his column Stage Dad on DCMetroTheaterArts, you were in Billy Elliot on the road. When he finished the column the musical had closed.

Take us on your journey from when Billy Elliot closed and you got called in for auditions for Newsies, and you were offered your role in Newsies. And what role are you performing in the show? Are you understudying any role and have you gone on for that role yet?

I left Billy Elliot in May 2013 because my voice had changed and I had outgrown the role. I had seen Newsies on Broadway and knew that was the next show I wanted to do, but I could not audition for it until I turned 16. I moved back home to Lorton, VA., and went to school with my twin sister, Emma, at Lake Braddock Secondary School. I also continued my dance training at MSA, and worked on the combinations for Newsies.

Last year, after I turned 16, I went to an open call for the Newsies tour. The producers had announced that the show would be closing on Broadway but that it was going out on a national tour. I went through the open call process and had two callbacks before the final callback in front of the original creative team and producers.

I booked one of the Newsies roles, but they didn’t assign the characters until we started rehearsals. The director, Jeff Calhoun, gave me a chance to try the role of Race, who is one of the leaders of the ensemble. He is Jack Kelly’s buddy, kind of a smart aleck, and he always walks around with a cigar.

On the tour, I’m also understudying Crutchie, who is Jack’s best friend and is hobbled by a bad leg. I haven’t gone on as Crutchie yet, but I hope to soon. The show’s writers have added a solo for Crutchie in Act 2 especially for the tour, and I’m looking forward to performing that.

Both Billy Elliot and Newsies have extremely ‘challenging’ choreography. What’s similar about both show’s choreography and what’s different? Which scene or song’s choreography was the hardest to learn and perform in both shows?

The shows are very challenging, because they require you to know how to do all types of dance. In Billy, you had a lot of tap in addition to ballet, and in most of the scenes the focus was on the main character. The dance was very precise and you had to perform the steps a certain way.

Newsies is different because it is focused on the ensemble. It’s very athletic and very strong dancing with a group of young men who are in their teens and early 20s. The original choreographer, Christopher Gattelli, worked with us on the dances and allowed us to bring our individual strengths to the choreography. In that way, it is much more collaborative than Billy was. At the same time, it’s tough because so much action is occurring on stage during the biggest numbers that you have to know where you are at all times.

In Billy the most difficult numbers were “Born to Boogie,” where you had to jump rope while tapping; “Angry Dance,” which ended Act I, and “Electricity,” which is a complete solo and has 16 turns in the second position at the end of a three-hour show.

Newsies has several big numbers in it that require you to go all out for them to work, so by the end of “Seize the Day,” “Carrying the Banner,” and “King of New York” you’re really tired, and there’s a huge part in the finale as well. But the show is so inspiring that you quickly catch a second wind.

Stretching, water, rest, lots of protein and carbs, and Starbucks. All of these things are necessary to get through the show and life on the road.

Is the production we will be seeing at National Theatre different than the Broadway production in any way?

What you’re getting is the same quality show that you saw on Broadway in terms of the set and production values, but you also have the song they added for Crutchie, which really helps add to his role.

Where has the tour been so far and which theatre has been your favorite so far?

I’ve really enjoyed the mix of theatres on this tour. Some of them I went to when I was on the Billy tour, but I’ve been to a lot of new cities too. I really enjoyed the theatres in Dallas and in Orlando; both of them are new and they are fantastic buildings to perform in.

Have you ever performed at The National in DC before? What are you looking forward to most when you perform there?

I’ve performed at The Kennedy Center, Ford’s Theatre, and the Folger, but not at The National, so I’m really looking forward to it. I’ve seen a couple of touring shows there and it’s a really nice building.

What I’m looking forward to most is seeing my family and friends when I get back into town. I haven’t been home since February, and it will be nice to catch up with people and bring this tremendous show home.

What does Newsies have to say to young audiences? What are some of its themes and lessons?

One of the cool things about this show is that it’s based on an actual historical event, the 1899 strike that led to the establishment of child labor laws in our country. So you get a piece of history wrapped up in a show filled with song, dance, and hope. Newsies is about the underdogs taking a chance on something they believe in and ultimately winning. You can see young people taking on big business and getting what is rightfully theirs. At the same time, the newsies are not lazy. They know they have to work and work hard. They just don’t want to be taken advantage of.

How have you grown as a dancer and actor since appearing in Newsies?

I’ve learned to take better care of my body, that I have to have proper sleep and food to be able to do this show night after night. As a dancer, I’ve seen all of the other guys work so hard at what they do, perfecting their craft, learning little tricks, and I’ve tried to take all of that in.

As an actor, I like Race because he’s a comedic role, and fun to play. He’s given me a chance to practice my timing on certain lines, to see how the audience reacts on any given night. And also, within this great ensemble, I’ve seen actors and actresses who have been working at this for a long time, and they are still trying to make things better.

I’m never 100% satisfied with a show. I always think it can be better. And the best part of doing something like this is that we always have tomorrow to try to make it better.

What advice do you have to a young dancer or actor who wants to make theatre his or her career?

Train. Work hard. Train some more. You never stop training, whether you’re in a show or not. Have goals, short-term and long-term, and don’t be afraid to seek advice from others when you have questions about your future. Also, remember that it takes everyone, from the house manager to the director and producer, to make a show run successfully. Everyone is equally important.

Many people forget that parents make many sacrifices when their children are on the stage and have to perform out of town. How has your family supported you with your career?

My family has been tremendous, starting with my mom and dad, who’ve taken me to auditions, helped me move to New York for three years, and supported me no matter what. They understand that this is what I want to do, and really need to do, to feel whole in my life.

I’m a twin, and my sister Emma has also been there for me, even though it’s difficult to be apart from her for long periods of time. As much as I missed working, I also enjoyed being home with her and my sister Kate last year. And my brother, Nick, has come out to visit and take care of me on the road at different times. I’m really very lucky.

What has been the most fun about performing in Newsies?

Seeing the reaction of the audience to the show every night is tremendously gratifying. Newsies has been blessed to have a very devoted audience that cares a lot about the show and the plight of our characters. They respond to the show and give us all the energy we need.

Why should parents bring their kids to see Newsies?

Newsies is a fun show for the entire family. It has great dancing, great music and a strong story about underdogs who take a chance and ultimately find success through hard work and perseverance. It’s tremendously entertaining, but it’s themes are big. They make you think, even as you sing along to the score. That’s the best kind of musical to me.

LINKS
Stage Dad: ‘So Long Billy! It’s Been Good to Know You!’ by Glenn Cook.

The next generation of theatermakers will include these young Black voices