There is so much to see in historic Fells Point in Baltimore that it would be easy to pass by the tucked away home of The Vagabond Players. However, this little theatre is about to celebrate a big anniversary: 100 years of continuous operation, more than any other little theatre in America! Before the thespian version of Willard Scott comes out to wish them a happy 100th birthday, the Vagabond Players are finishing up their 99th season with a hit: Born Yesterday.

Written by Garson Kanin, Born Yesterday delves into the occasionally unsavory world of D.C. politics. Millionaire Harry Brock arrives in Washington, D.C. to meet up with Senator Norval Hedges, so that they may work out a deal to keep Harry in the money and Norval in his Senate seat.  With the assistance of his lawyer Ed Devery, Harry has managed to sign over parts of his company to his cousin/bodyguard Eddie and his girlfriend, former chorus girl Billie Dawn. Things start to go awry, however, once Brock gets the idea to hire journalist Paul Verrall to expose Billie to education and culture. Once Billie’s My Fair Lady-esque education begins, she learns much more than she expected.

Director Steve Goldklang could not have picked a better pair to portray Harry and Billie. Award-winning actor Steven Shriner commands the stage as Harry; full of Jersey confidence one minute and bubbling over with terrifying rage the next.

Anne Shoemaker, however, steals the show as Billie, and she can tell an entire story with just the curl of a lip. She is flawless in her portrayal of the newly-educated chorus girl, with the comedic timing of Lucille Ball and the smooth delivery of Vivian Leigh.

Mark Scharf and Bill Bossemeyer give solid performances as Ed Devery and Senator Norval Hedges, and both Bruce Levy (Bellman/Barber) and Mark Wible (Eddie Brock) hit their marks every time.

Vagabond veteran Carol Conley Evans impressively switched between her roles as the sassy maid Helen and the proper Mrs. Hedges.

Torberg M. Tonnessen’s Paul Verrall’s was more sedate when paired with Shriner and Shoemaker, but he really came to life when he was a speech about Napoleon in the second act.

Director Steve Goldklang brilliantly staged this production, down to the minute details in the purposely slow-paced game of gin rummy between Harry and Billie.

Ann Mainolfi dressed Billie in stunning glitter and lace until her “education” began, and then she was costumed much more conservatively, as would fit her character.

In their 99 years of performing, the Vagabond Players never disappoint. Hurry to see Born Yesterday as they end their 99th year and make sure to come back to celebrate their centennial celebration! 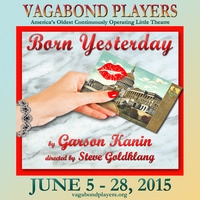 Born Yesterday plays through June 28, 2015 at The Vagabond Players – 806 South Broadway, in Baltimore, MD. For tickets, purchase them online.