Youthful energy is bursting out all over at Source Theatre Festival 2015, which began last night with its first round of six 10-minute plays, roaring in under the banner Mistakes & Media.

This opening night was clearly built for the 20-somethings, now on full display up and down 14th Street’s early evening spring-a-fluttering commercial corridor. 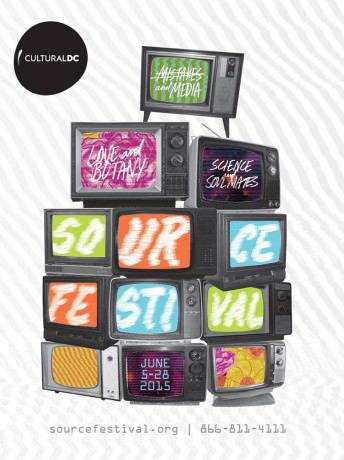 And the language is as hypertexted as some of the scripts, from tweeting, sexting, instragraming, trending, hashtagging, blogging, meming, viralling,

to the more traditional texting and the soon to be hyper-tweeping(?).

Now, you have to know I’m old school. I roamed 14th Street during the 1980s when luring folks to 14th Street, past the crackheads and prostitutes required more than a posh meal and a joystick.

But the Festival’s opening round was fun: a showcase of new scripts, new actors, new directors, and a glimpse into the ultraviolet world of the modern young’s topsy-turvy world.

Four comedies and two dramas–the most engaging play of the evening was Lucas Kruger’s The Sad Funeral, directed by Sun King Davis, and oddly enough it was old school (but it takes one to know one).

Not only does Davis handle the challenges of the alley staging like a real pro, but she gets her two fine actors, Alani Kravitz as Rosie and Danny Rovin as Tate, to really confront one another about their relationship, both to each other and to their recently beheaded foreign correspondent friend. The results are rewarding. Kravitz and Rovin build a true rapport, and their chemistry resounds.

On the comic side, RN Healey’s The Death of a Stupid Man, or How I Became an Internet Sensation took the funny bone. Directed as well by Sun King Davis, he once again revealed his understanding of style and space as this thematically rooted script takes us into the heart of our obsession for viral videos. Rovin plays the guy who dies by dancing headfirst into a wall while his girlfriend, Ashley Lyles, videotapes him. Robert Pike and Alani Kravitz fill out the cast as Man and Woman. But it’s the ensemble work and the direct address that really makes this script a winner.

Alyssa Wilden’s Prince and Rapunzel, directed by Quill Nebeker, took us headfirst into 21st century online dating, drawing ironically from the folkloric past. Rapunzel, played by the extremely versatile Ruthie Rado (so much so that I didn’t even recognize her in the second act when she played the totally connected Elina), cannot find a single virtual man worthy of a second glance–even that first glance doesn’t last too long. The Prince(s), played by the equally versatile Ronnie Brown, has to change his princely face, voice, posture, and gait so fast, and so frequently, that it’s no wonder that he sometimes turns into a witch. The zany script had the audience laughing frequently.

Connected by Christopher Holbrook, and also directed by Quill Nebeker, takes us into the real land of the zombies. Not really. These zombies have entered the Twilight Zone. Not really. Ashley Lyles plays Annbjorg, the work-at-home technology specialist who wants to move into an apartment with “real” people. Unfortunately, she finds a place inhabited by people transitioning into their cyber “connected” selves. The results are hilariously disturbing. The previously mentioned Ronnie Brown plays the almost totally “connected” Markus while the above mentioned Rado takes on the cyber-loon Elina, whose grotesque contortions had the audience fearing the future.

Closing out the comedy was John Yunker’s The Sales Rank Also Rises, directed by Ty Hallmark. And yes, the corniness of the titles expresses the corniness of the script, but if there is such a thing as good corny, Yunker’s found it. It’s the battle between the self-published husband, Ed, played earnestly by Matt Strote, versus the publishing house-published wife, Cathy, played by the “I can’t help but gloat” Mackinzie Williams. The script just proves that the 24-hour news cycle can even apply to authors following their book sales online and always.

Graziella Jackson’s Palm, the other drama of the evening, rounds out the six-play showcase and it is directed by Ty Hallmark. The script involves the survivor of a horrible family murder, Talita, played sympathetically by Ms. Williams, and her relationship with the police woman who rescued her, Miranda, played stoically by Kim Tuvin. Unfortunately, neither the script nor the staging helps this story come alive, as we are left with too many unanswered questions, feelings, and thoughts, and too many hidden faces, static images, and lost moments. But even the script’s media connection seemed more erroneous than authentic.

Nevertheless, five out of six new scripts that get your giggle going and your head in gear is a pretty good evening at the theatre.

Just make sure that social media is your thing, that the corny does not offend you, and that violent murder and trauma following, and foreshadowing the funny, “is just all right by me.”

Mistakes & Media 10-minute plays plays through June 26, 2015. For exact dates and times check out the calendar. For the complete coverage go to the Source Theatre Festival. The Source Festival performs at Source -1835 14th Street, NW, in Washington, DC. For tickets, call (866) 811-4111, or purchase them online.