It is a world of flamboyance and fanciful whimsy even as it reflects the deep undercurrents of the corrupting evils of the greedy 1%, flaunting their riches and life-style over the rest of Paris’s citizenry. That is, until their comeuppance as managed by four eccentric women and their unconventional community of associates in a delightfully absurdist smooth as a spinning top, second act.

The Madwoman of Chaillot does more than just touch upon serious themes of the sharp points of how life might be lived if the world was free of degrading influences.(Though who gets to define what is degrading is up for grabs in both the fictional and real worlds). It also addresses in small moments of dialogue, the conflict and contention between men and women.

All of this is accomplished in The Madwoman of Chaillot in a new translation by Laurence Senelick. This is the professional premiere of the Senelick translation, which from some Internet research, is different from the widely known and produced Maurice Valency (1903-1996) translation.  Madwoman was written by Giraudoux in 1943 during the height of Nazi power in Europe and their control of Paris. The play was first performed in 1945, after liberation of Paris and alas, after Giraudoux’s death. It came to America in 1948 and won a Tony Award.

The play is geographically set in the Chaillot area of Paris. Timewise it is set in the past; though time matters little. The audience first meet a gaggle of crooked, corporate White male executives representing developers, stock manipulators, and the landed gentry along with a prospector at a local boulangerie.

These co-conspirators are played with flamboyant relish and Marx Brothers glee by Jay Hardee, Kim Curtis, Joe Palka, and Theo Hadjimichael (I must say, some of the dialogue the audience hears is not so different from I head often enough at my local Starbucks, though not delivered with such showiness. As for what might said by say, the Koch Brothers, will not that is outside the scope of this Madwoman).

Some in the Chaillot neighborhood overhear that the pillars of capitalism believe there is oil under the Paris streets that should be exploited; never mind that it will destroy a community. What can and should be done to foil them before destruction of all that is true and beautiful is obliterated by pop-up oil rigs? After all, as one of those rich folk asks and the answer obvious to him; “What would you rather have in your backyard: an almond tree or an oil well?”

Well, thankfully, this production has the rock-solid, twinkling-eyed, splendid Cam Magee to come to the rescue. She is the heart-of-gold, eccentric, mature Auriele, the Madwoman of Chaillot. She will do whatever she can to rescue her community and fight against a world controlled by the “pimps” of the moneyed and well-connected classes. Her “madness” often seems only the idealistic desire to save what is happy, beautiful and well-known. Inklings of her “madness” as in more unhinged, come in snippets here-and-there, and the penultimate scene in Act II.

Magee collaborates with her three “madwoman” cohorts. These include a resilient, and determined Anne Nottage with her invisible dog named Dickie, a sweetly coquettish Tiffany Garfinkle, and Christine Hirrel as a tough-minded, cut-to-the-chase, short-term judge. There is also a dynamite James Finley as an all-knowing rag-picker, who learns from his daily pickings through rich people’s trash that “They run everything, they corrupt everything.”

Added to Magee’s forces are the likes of Irma, a young dishwasher (in a brisk turn by Daven Ralston), and the critical key to a special door, the Sewer-Man, who appears at the top of Act II from a spirited round turquoise glass wearing Tony Greenberg. There is also a boy-toy love interest for Ralston and special apparition presence for Magee named Pierre (a sweet Zach Roberts). Along with many others they devise a way to thwart the rich folk after some quite fascinating banter with a cold-hearted give-and-take about the vagaries of the law. Paris is saved in a court scene worthy of Alice and the Mad-Hatter. Just punishment is handed-out along with a joyous line-dance with personality, choreographed by Jane Franklin, director of Jane Franklin Dance. All ends with joy.

There is plenty that is rich and delightful in this The Madwoman of Chaillot. The audience can root for the unconventional to come out on top, and silently, boo the developers and capitalist in their attempts to ruin the 99%. But there are “buts” to pursue in this review since some marred my overall take-home affect.

The over-enthusiastic and way-arch characterizations of some characters took away from the deeper messages that Giraudox and new translator Senelick seem aiming for. The dialogue was overtaken to become, for me, Buzzfeed rather than sharp multi-layered political farce. The top of Act I as the co-conspirators presented themselves, it was drawn-out to the point of hammering. Yup, they were bad, no question. But how much do we need to know of ever jot-and-tittle of their badness to know they are evil?

I must say, and perhaps I dig way too deeply, there was a piece of dialogue that gave me pause. It was as the community spoke of those moving into their neighborhood who were “different” and did not look or sound like them. Yes, in The Madwoman of Chaillot the dialogue is aimed at the super-rich, but what if the words were aimed at new immigrants or young Millennials or giving its WW II date of writing, those of another religion? Just a thought and a digression.

Technically, Madwoman, is charming. Set Designer Collin Ranney’s spring-time Paris street scene for Act I and a basement apartment in Act II well establish Chaillot locations. The four madwomen are dressed (again by Collin Ranney) to give off sweet flair and insouciance. Sound design by Frank DiSalvo Jr. has a number of nifty, delightful touches for scene changes well beyond Edith Piaf.

In his artistic director’s note, W. Thompson Prewitt wrote about the “everlasting insights of the plays” Avant Bard produces. He is right indeed, for The Madwoman of Chaillot has plenty to offer DC’s audiences “to discover the many ways” such a play still speaks to us decades after it was written. 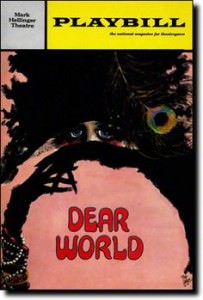 Note: Jerry Herman’s Dear World (1969) was a Broadway musical adaptation of the earlier Valency translation of Madwoman. It starred Angela Lansbury, who won her a Tony Award, with music and lyrics by Jerry Herman, and book by Jerome Lawrence and Robert E. Lee.