The musical inventiveness and dramatic craziness of one of Leonard Bernstein’s most challenging pieces of all, his 1956 musical Candide, must flow right through Marin Alsop’s veins.

The music director of the Baltimore Symphony Orchestra, a personal disciple of Bernstein, has long experience with his repeatedly revised dramatization of Voltaire’s 18th-century novella. Secure in its panoply of musical styles and endlessly shifting rhythms, Ms. Alsop this week is allowing what the BSO conservatively bills as a “semi-staged operetta” to turn into practically a fully staged musical, with the BSO serving as an upstage pit orchestra and the Baltimore Choral Arts Society as Greek chorus.

In its initial performance last night at The Music Center at Strathmore, tenor Keith Jameson shone as the title character. Candide is an illegitimate child of the north German region of Westphalia who improbably travels the globe in search of proof of his mentor Dr. Pangloss’ insistence, against all plain-to-see evidence, that he lives in the “best of all possible worlds.”

Mr. Jameson is paired with a young soprano from the Houston Grand Opera, Lauren Snouffer. As Cunégonde, the musically gifted Ms. Snouffer soars well above high C’s and executes the various coloratura passages that Bernstein has provided for her character. Her challenge is combining her musical chops with the dramatic and comedic demands of the role, especially in the face of a legacy of superstars who have brought Cunégonde to life.

Ms. Snouffer’s somewhat vowelly vibrato occasionally washes out the jokes embedded in her duet, “We Are Women,” with Broadway veteran Judy Kaye as The Old Lady, a character whose cynicism helps lead Candide and Cunégonde to a realistic assessment of their purpose in life. The packed Strathmore audience gave Ms. Snouffer a huge ovation for Cunégonde’s showpiece “Glitter And Be Gay,” even if Ms. Snouffer’s half-hearted fumbling with her pearls and jewels cannot approach the spectacular mugging and clowning around that recent Tony Awards hostess Kristin Chenoweth achieved while singing this most difficult of all possible theatrical songs in a 2004 televised performance with Ms. Alsop conducting the New York Philharmonic (still available on DVD).

Ms. Snouffer also tripped over an early joke regarding a stolen embrace with Candide promising the “best of all possible juxtapositions.” But with three remaining performances this weekend at Baltimore’s Meyerhoff Symphony Hall, she can continue to develop the crossover operatic and theatrical appeal that much of the rest of the cast brings to the table.

As Dr. Pangloss, Canadian baritone Joshua Hopkins fearlessly delivers the ironic message of optimism even when placed in humiliating situations, with an ultra-clear voice paired with the kind of stentorian operatic comedy that he brings from past roles in Rossini’s The Barber of Seville and Mozart’s The Marriage of Figaro.

Two young singers in particular with local training nicely pulled off the numerous cameos embedded in Bernstein’s operetta via endless show-doctoring by a bevy of lyricists ranging from Dorothy Parker to Stephen Sondheim. Curtis Bannister, a graduate of the Peabody Institute, immediately grabbed the audience with a hilarious turn as the Westphalian baron who forbids the marriage of his daughter Cunégonde to the hapless and low-born Candide. From then on Mr. Bannister seemed to be flying all over the stage in numerous roles as the plot ranged from France to Spain to Uruguay and the mysterious paradise of Eldorado.

And I was delighted to see the recent University of Maryland master’s-degree graduate Andrew McLaughlin, whose superb baritone voice seems to be employed by Washington area ensembles in something new every month, in three brief roles. Last seen on the Strathmore stage in April as the voice of Jesus in Bach’s St. John Passion, Mr. McLaughlin’s voice, paired this time in musical-theater fashion with a body mike, combines with the Strathmore acoustics to produce an experience in itself.

The globe-trotting story of Candide can be a little hard to follow. So Stage Director Garnett Bruce made the wise decision of employing as many audience helps as possible, from a projected map of the world zooming in on the story’s locales to flash cards held up by the Baltimore Choral Arts singers, to explicit narration by a bewigged Peter Sagal, host of NPR’s comedy news-quiz show Wait Wait … Don’t Tell Me! For fans of Mr. Sagal’s radio show, some of his jokes and references were rather obvious coming from a mile away. And the dripping sarcasm of many of the Act 2 scenes, with numerous characters killed off in previous scenes magically reappearing – handled in various productions of Candide with “oh never mind” stepping-out-of-character winks between the actors and narrator – needs some timing work as the run continues in Baltimore.

But Mr. Sagal effectively made wry connections between the lessons of the story and the still imperfect state of our own 21st-century globe. And much of the audience, obviously loyal Montgomery County patrons of BSO concerts of all types, always had Ms. Alsop’s conducting to fall back on. The orchestra’s performance of the show’s iconic overture was simply spectacular, with Ms. Alsop and the brass players joined at the hip throughout Bernstein’s hiccup-py rhythms and offbeat asides.

And special kudos to BSO principal bassoonist Fei Xie, whose lightning-quick downward scales against the soaring soprano voice in “Glitter And Be Gay” among other tricky licks throughout Candide were marvelously executed. That alone would make Mr. Bernstein proud for his protégé Ms. Alsop, and for the ongoing place of his Candide as a unique piece in the American musical and operatic canon.

Running Time: 2 hours and 25 minutes, with one 20-minute intermission. 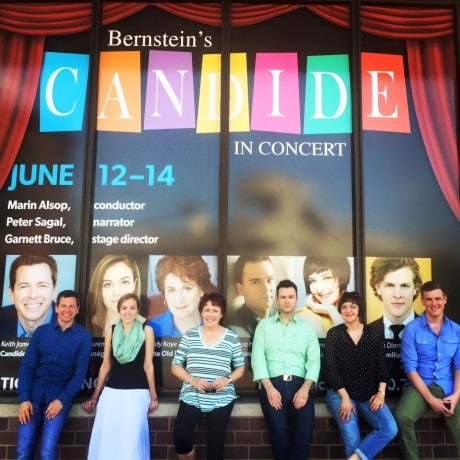 Leonard Bernstein’s Candide by the Baltimore Symphony Orchestra with the Baltimore Choral Arts Society was performed on Thursday, June 11, 2015 at 8 p.m. at The Music Center at Strathmore – 5301 Tuckerman Lane in North Bethesda, MD. It will be performed at the Joseph Meyerhoff Symphony Hall – 1212 Cathedral Street in Baltimore, MD, on Friday, June 12 and Saturday, June 13 at 8 p.m. and on Sunday, June 14 at 3 p.m. For the BSO’s complete upcoming concert schedule, including their recently announced 2015-2016 season, see their ticket calendar.