My first foray into the world of high school award programs began last year when I attended The National Capital Area Cappies award event. And, leading up to this year’s program, celebrating the 2014-2015 Season with its 16th Awards Gala Sunday, June 7, 2015, again in the Concert Hall of The John F Kennedy Center for the Performing Arts, in Washington, DC, I had little expectation that the event put up last year could be topped. Suffice it to say that my fears were misplaced. This year’s program brought an even more pronounced sense of professionalism, excitement and the enhanced performance quality that further cemented the quality of elite high school programs.

Founded in 1999 by Judy Bowns and Bill Strauss, the Cappies program was formed to foster both the critical review of high school theater as well as to provide the adjudication foundation for the annual Awards Gala. Since then, the Cappies has grown to include fifteen regions in the United States and Canada representing nearly 300 high school programs. And with nearly 60 schools represented, this largest chapter’s gala Sunday evening was the culmination of a year that saw more than 12,000 involved students, either as critics or as cast and crew of reviewed shows, representing an estimated 25,000 volunteer hours invested in the program.

Right from the start, this gala seemed to announce that even higher quality than in the past would be the order of the evening.  As in the past, the gala kicked off with a rousing overture performed by the Cappies dancers and vocalists, supported by the student filled symphony and led by Music Director Chris Johnston. But this year, Choreographers Jennifer Koonce and JT Thomas seemed to up the ante. Whether it be stronger dancers, a new routine or simply more energy from the performers, the sheer excitement and execution proclaimed this was an event not to be missed. With Judy Bowns, Janie Strauss, and Ed Monk again serving as Masters of Ceremony, the evening saw the presentation of nearly forty awards running the gamut from sound, set and stage crew to lead actor and actress and culminating in best song, play, and musical. In between, attendees were entertained by the performance of five musical numbers and five scenes from award nominated musical and plays respectively.

The dramatic tone of the evening was set with a scene from Robinson High School’s Neverwhere. Rich in both intensity as well as costume, the troupe quickly captured the audience’s attention and kept all enthralled until completion. It was not until the end of the evening that we would learn that this was award winning play of the evening. But both the celebration as well as competition was unequaled this evening as evidenced by Duke Ellington High School’s riveting scene from In the Red and Brown Water. With the scene anchored by Jayme Lawson, Lead Actress in a Play, as well as Duke Ellington’s award-winning Ensemble in a Play, the troupe’s portrayal of inner-family dynamics, strongly flavored with a Caribbean flare, was an audience favorite.

But attention would not turn exclusively to the evening’s dramatic pieces. The delight and the whimsical typically presented by the award-nominated musicals provided a perfect counterbalancing to the more intense dramas. The song Fun, a number from the musical Big and performed by Fairfax High School, wonderfully portrayed the iconic scene from the similarly named movie in which the characters of Josh Baskin and George MacMillan deftly dance across the keys of a giant keyboard. Quickly following, Bishop Ireton’s Aldolpho, youthfully and energetically portrayed by the Comic Actor in a Musical award-winning Joey Ledonio, continued the levity, wonderfully “chewing the scenery” in the custom of the new modern classic The Drowsy Chaperone. 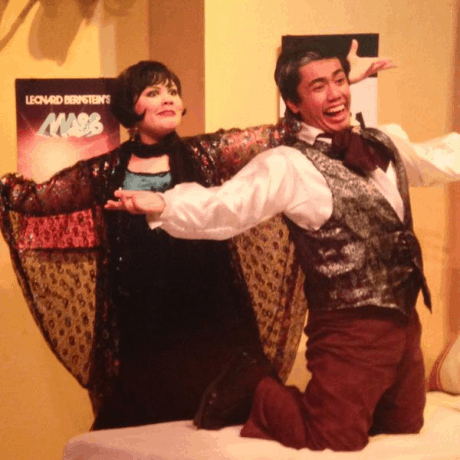 Additional presentations brought attention to programs with rising theatrical prominence. After winning 2014’s award for Best Play, Langley High School’s scene from Book of Days and the performance of Lead Actress in a Play nominated Jamie Goodson focused the audience’s attention once again on the dramatic. Typically known for her vocal chops, Goodson’s dramatic intensity was palpable. Likewise, Heritage High Schools’ When You’re an Addams from the Musical The Addams Family,  showed off the award-winning Ensemble in a Musical and proclaimed the growing prominence of this program from Metro DC’s western suburbs. With this its second consecutive year nominated for Best Musical, departing theater director Montana Brown has left Heritage’s program in strong shape. The one departure from the evening of musical levity came from Jack Gereski’s rendition of Bring Him Home from South County High School’s Les Miserables. Following his awarding of Comic Actor in a Musical in 2014, Gereski’s pure falsetto was clear evidence why he would later be awarded Male Vocalist.

But it was with McLean High School’s rendition of Be the Hero from the musical Big Fish that the evening reached its peak.  Anchored by the impressive vocals and attention-grabbing presentation of Alex Stone, enhanced by the strong and talent-appropriate of Mclean’s dance – choreographed by Marielle Burt, Rebecca Stewart and Jamie Wertz – wonderfully executed by the tight ensemble and even aided by a comical cascade of jumping fish, this award winning Best Song brought smiles and an appropriate tumult of applause from the appreciative audience.  Little did witnesses know that later, McLean’s Big Fish would be proclaimed Best Musical and Stone, for the second consecutive year, awarded Lead Actor in a Musical. Director Amy Poe has set a high bar for local programs as she departs for her next theatrical adventure.

At the evening’s end, McLean High School’s seven awards led the group. South County High School’s four recognitions tied with Robinson High School’s total to split second and third place. But the tone of the evening was more set with the award equity across the programs rather than the dominance of one or two schools. And, as young thespians are to be encouraged to not so much win as to enjoy and celebrate the medium that is performance, this equity is, in itself, to be celebrated.

As the crowd gave the last ovation and funneled into The Kennedy Center lobby, it was clear that the evening had again borne witness to the celebration of theater in the DC area. Those celebrated and recognized at The Kennedy Center Sunday evening – the singers, actors, dancers, musicians, light crew, sound folks and props people, just to name a few – testify that the excellence in DC theater is not limited to the large venues nor even the impressive regional theaters we enjoy. That excellence is alive and well at the high school level and growing toward the professional stages in the future.