DCMetro Theater Arts’ Winters Geimer had an exclusive interview with Charles Ross on what you should know before the show and his thoughts on the upcoming Star Wars films. This is the first time that Charles Ross has returned to Baltimore since 2008. One Man Star Wars Trilogy is in town for one night only this Friday at Baltimore Soundstage! 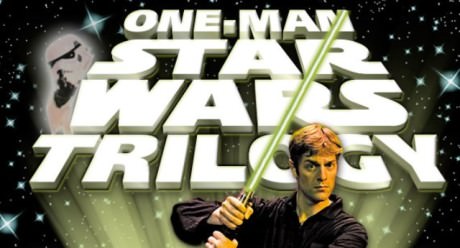 Winters: Why did you decide to do One Man Star Wars Trilogy?

Charles: It does go many years back. Working as an actor, living in Canada (I’m from Canada) when I was about 27 years old, I was constantly looking for work. I decided to do something myself.  It was just me, no sets or costumes. I did the first Star Wars in this club. Itwas about twenty minutes long. I didn’t think they would get it. They totally got it. Star Wars isso popular around the world and people just love it.

You have performed Star Wars around the world and for a lot of different audiences. What’s your favorite type of audience?

Some of the Northern states really know their Star Wars. I think it’s because the winters are so terrible up there. You don’t always think an audience looks nerdier enough, but they’ll surprise you. By day they are doctors and lawyers, but at the show they are crazy fans. I was surprised at how well the show translated for Singapore. Star Wars is so popular around the world that everyone just loves it.

What should people know before seeing your show?

They should know at least something about Star wars before seeing the show. Otherwise it’s just 40 year old me up on stage for an hour. They should have seen Star Wars at least once before
coming and watching my 40 year-old body on stage.

What are some difficulties in performing the show?

Sustaining the energy. I don’t want to be on the last show of the week and be dragging. When I’m touring, I sometimes do nine shows a week. The only people who tour as much as me are rock stars (laughs). I enjoy the challenge.

Which Star Wars film is your favorite?

I’m not trying to avoid the question, but I like the whole story. Picking my favorite Star Wars film is like picking my favorite chapter from a book. I mean, some people might have one, but I
like the whole story. When I was a child I really liked the first film. It was simple. Luke savesthe day and gets a medal. There were no politics. There was no emperor. The first film is the
only film that can stand by itself. If none of the other films were made, the first film would still stand alone.

What are your thoughts on the new Star Wars films?

I have no idea! I think it’s fine that they’re making them. I know there are good guys andbad guys. Disney is going to make a quadrillion dollars. After doing this show for so long it’s
hard not to look at anything Star Wars without looking at it critically. When I watched the films as a child I had this childlike wonder. I’m excited, but cautious.

How long do you plan on touring One Man Star Wars Trilogy and how do you think the new films will effect your show?

I don’t know. I’ve been touring it 14 years. I didn’t think it would keep going this long. I think the new films could have a positive effect on the show. Star Wars is so popular by itself that it generates its own excitement. You don’t need to do much to get people excited about Star Wars.

Was it difficult getting your show licensed by Lucasfilm?

It was easy. I didn’t contact them, they contacted me. At some point, it became necessary. I was performing the show in New York and they wanted to make sure everything was good.

How was your experience getting your other show, One Man Lord of the Rings licensed?

The process was labyrinthine. There are so many different Tolkien rights holders. It’s not just the Tolkien family; you have to deal with the publishers and the filmmakers. People who
think they have a claim, but don’t. Once we found out who to talk to, it was easy. Then, it was just reasonable people talking to reasonable people. 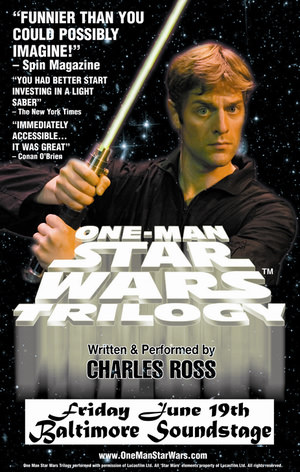 Charles Ross will be performing One Man Star Wars Trilogy at the Baltimore Soundstage on Friday, June 19, 2015 at 8:00 PM, for one night only.