People say that theatre has a magical quality to it and that when an actor appears onstage, he is transformed in such a way that you no longer think of the actor and only think of the character. Part of it may have been that theatre magic, but I think it was the pure talent of the actors that made me forget that I was watching a group of middle and high school students instead of watching actual businesspeople of the 1960s during the Youth Theatre of Northern Baltimore County’s production of How to Succeed in Business Without Really Trying.

Frank Loesser and Abe Burrows’ Tony Award-winning musical How to Succeed in Business Without Really Trying tells the story of J. Pierrepont Finch, and his unconventional rise to the top of World Wide Wickets. With the help of his trusty manual for success, Finch manages to climb the corporate ladder through cunning trickery, sidestepping the attempts by the boss’ nephew to bring him down. Along the way, Finch falls for the lovely secretary Rosemary and gains the trust of many of the executives of the company “without really trying.”

Kirby Smith does an excellent job portraying the smooth, fast-talking Finch, and his rendition of “Rosemary” is overflowing with emotion.

Allie McLoughlin beautifully trills “Happy to Keep His Dinner Warm” as the sweet and smitten Rosemary.

Along with Smitty (played by Marcy Ledvinka, who has an incredible voice), the three are in perfect harmony during “Been a Long Day.”

Sam Boelens is wildly entertaining as the butt-kissing Bud Frump, nephew of the head of World Wide Wickets, J.B. Biggley (played by the comical Patrick Chaney).

Andrew Stewart’s musical direction brings about a beautiful choral sound from the cast, and he impressively tickles the ivories for each of the show’s many musical numbers.

Nina Kauffman’s choreography is clever and cheerful, especially during “A Secretary is Not a Toy” and “Brotherhood of Men.”

The adorable vintage costumes created by Mary Miller, Mary Keating, Joyce Hohner-Ledvinka and Lisa Dobbyn, and the detailed 60’s style office building set, which was constructed under the eye of Nolan Cartwright, truly brought the illusion of a 1960’s office to life.

Not only are these young actors impressive for their acting and singing abilities, but they are true philanthropists as well. The Youth Theatre of Northern Baltimore County performs at a local VA hospital, collects food for the hungry, and provides supplies to classrooms, among many, many other charitable deeds. These kids are not only thinking about the spotlight—they’re thinking about those in need.

This irresistible Parkton original production of How to Succeed…is one not to be missed! Support local youth theatre and at the same time, support those in need!

Running Time: Two and a half hours, plus a 20-minute intermission. 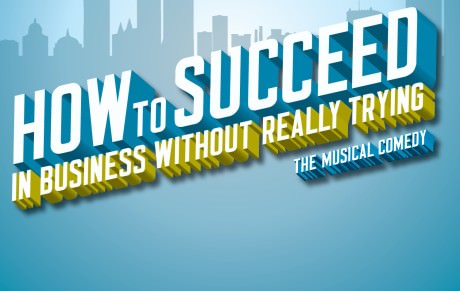